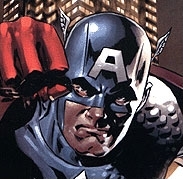 Born in 1922, Steve Rogers was orphaned at a young age and was a student in fine arts specializing in illustration when the Third Reich began its rise in Europe. Appalled by the actions of the Nazis, Steve attempted to enlist in the Army for when America inevitably entered the war. However, because of his frail physical condition, he was rejected. By chance, an Army official was there when Steve tried to join, and offered him a chance through a top-secret project he was involved with; Operation: Rebirth.

The project was designed to create the ultimate super-soldier, perfect in every physical way possible and the best weapon America could have against the Nazi Regime. The Super-Soldier formula and the transformation process were designed by a German defector named Dr. Emil Erskine, codenamed Dr. Reinstein. Steve received regular injections of the serum and then was bombarded by specialized Vita-Rays to activate it, changing Steve's body into peak-human form. With the success of the project, the next step would have been to create an army of Super Soldiers, but a Nazi spy revealed himself at the last instant and killed Dr. Reinstein, and with him, the formula.

Deciding to make the most of its single super-soldier, Steve was put into an intensive training regiment both in hand-to-hand and weapons combat, particularly with the specialized bullet-proof shield he was armed with. Seeking to use him as not only a counter-intelligence agent but also as a propaganda symbol to counter Nazi Germany's head of terrorist operations, the Red Skull, Steve was given a uniform modeled after the American Flag and the codename Captain America.

Embedded into the Army as clumsy private Steve Rogers, he was stationed at Camp LeHigh in Virginia where he met James Buchanan "Bucky" Barnes, the camp mascot. They became friends and Bucky eventually learned of Steve's dual identity, promising to keep it a secret if he could join in his fights. Cap agreed and trained Bucky and the two became a revered fighting force, taking on a wide variety of criminals and Axis operatives, including numerous battles with the Red Skull. As a thank you for all his work and dedication, President Franklin Roosevelt bestowed upon Cap his current shield made up of a mixture of iron, Vibranium and an unknown catalyst. Because of its lightweight and indestructible nature, it could be used as a throwing weapon and became Cap's primary tool.

When America finally officially entered the war following the attacks on Pearl Harbor, Cap and Bucky were among the founding members of the super-team known as The Invaders, whose roster included the android Human Torch and his sidekick Toro, Namor the Sub-Mariner, Miss America, Spitfire, Union Jack and the Whizzer. Cap continued to inspire his fellow soldiers and earned the respect of allies and enemies alike during his battles alone with Bucky or together with the Invaders. He also worked with a Canadian agent, who would later be called Wolverine.

Towards the end of the war, Cap and Bucky were sent to prevent Nazi operative Baron Heinrich Zemo from obtaining an experimental plane. They arrived just as Zemo launched the plane with an explosive device on it. The two heroes jumped onto the plane and Bucky attempted to defuse it, but it exploded beneath them. Cast into the freezing sea, the super-soldier serum that made Steve Captain America saved his life by putting him into suspended animation. Bucky's body was never found, and both were believed killed in action. In order to keep up morale for the remainder of World War II and future wars, the US Government had tried to fill the costumes of Captain America with three different men, each with varying degrees of success.

It wasn't until several decades later that the newly formed Avengers (Ant-Man, Wasp, Thor and Iron Man) came across Cap's frozen body in the North Atlantic. The block of ice he was encased in had melted in the water when Namor, irritated at an Arctic tribe worshiping the figure, threw it into the ocean. Revived, Cap found himself a man out of time. Despite a difficult adjustment period, he agreed to join up with the Avengers and also came to work once again with fellow war veteran Nick Fury, who ran SHIELD. Though the years have changed, Captain America continues to fight for the ideals on which America was founded.

Captain America is deeply respected by the super hero community and no less by Spider-Man. Cap has helped Spidey against Carnage and his gang of murderers, helped Spider-Man save a kidnapped boy from Electro and against the Queen, who wanted to activate the human "insect gene." Cap has also been an ally to Spider-Man and Silver Sable when the Red Skull plotted to put the nations of America and Symkaria to war. Aunt May remembers him as a hero to her generation and he is one of the few heroes that the Punisher respects enough to not fight.

The recent events of Civil War had put his ideals to the test. Believing Registration was a theft of civil liberties, Cap rebelled against the Registration Act and became an outlaw. He led the Secret Avengers, rescuing and recruiting heroes who also believe Registration is unjust. This put him at odds with his old friend/rival, Tony Stark, a staunch supporter of the Act. In a giant melee in New York, Captain America was taken down by Stark and his pro-Registration allies. On his way to the Court House, Steve Rogers was shot and killed by his girlfriend, who was under the mind control of the Red Skull.

Before Rogers was killed, he was reunited with his former side kick, Buchanan "Bucky" Barnes. He had survived the Second World War and was captured by Soviet forces and trained to be a professional assassin. The "Winter Soldier" has none of Rogers' super strength, but has greater espionage ability. After Steve Rogers was gunned down, he became the second Captain America. Buchanan strives to make up for his crimes and atrocities committed as the Winter Soldier, while honoring the name of Captain America.

Cap became a victim of the Jackal during the events of Spider Island. Mutated into a human/spider hybrid, Rogers was forced to become Dr Warren's bodyguard and servant. Known as the Spider-King, Rogers was captured by Flash Thompson (aka, "Agent Venom") and taken back to his base for study. It was there that it was discovered that Cap had been mutated. He was changed back to his normal form due to the Anti-Venom cure and he and Agent Venom teamed to take down the Queen.

Cap and the other Avengers were later called to duty to take down the returned Carnage, who had taken over the town of Doverton, Colorado. He and the others were taken by surprise by the Carnage symbiote, who quickly possessed and bonded to the heroes. They were under Kasady's control, despite Roger's best effort to fight the creature's influence. In a moment of freedom, Cap made contact with his superiors in Washington and told them to send code 4563: Agent Venom. After Carnage was defeated, Cap helped clean up the remaining symbiotes in Doverton.

Rogers and the Avengers were soon called upon to help defeat the Sinister Six (Doctor Octopus, Rhino, Electro, Chameleon, Mysterio and Sandman) from destroying the planet with heat magnifying satellites. The Six beat the Avengers, except for Spider-Man and Black Widow, who were rescued by Silver Sable. After Mysterio led the three heroes to Guatemala, Octavius unleashed the mind controlled Avengers on them.