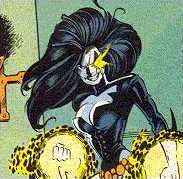 Sandra/Frances was a young fat girl, whose mother was ashamed of, and whose parents abused her. That miserable childhood drove her to drugs. She became a groupie for a rock band, and a drug dealer. That was, until Cloak & Dagger dropped by during one of her deals. Being a disturbed woman to begin with, being exposed to Cloak's darkness didn't help. After that, we only know that she was captured and imprisoned in Ravencroft. According to her, she was doing some killing, when some cops blew her brains, and when gluing the pieces, the doctors missed some. I don't think we should take that version very seriously.

When Carnage escaped from Ravencroft Asylum, Shriek talked him into taking her with him from her prison cell. After that, they met with Doppelganger, Demogoblin and Carrion II. Frances childhood problems started to surface, when she talked them into becoming a family, where she and her 'husband' (Carnage) taught their 'children' (Carrion II and Demogoblin) their evil ways. And Doppelganger was their 'pet'. Her powers induced everyone to be violent, including the citizens of New York. By the end of "Maximum Carnage", Carnage had killed Doppelganger, Malcolm McBride seemingly was rid of the Carrion virus, Carnage was defeated, and Shriek and Demogoblin were captured.

Frances nearly escaped from Ravencroft nearly a year after Maximum Carnage by manipulating the emotions of the guards around her. Her taunts and the guard's anger gave her just the emotional boost she needed to break free from her shackles and break out other inmates (Webber, Pyromania, Gale and Mayhem). Spider-Man and John Jameson rounded up the other inmates, but John had to turn back for more tranquiler darts, leaving Spidey and Shriek. Amped up by the suffering of the people around her, Shriek was more than a match for Spider-Man, until John shot her from behind with a tranquilizer. Back in her cell, she ruminated on her enjoyment of Spider-Man's emotional agony. (Web of Spider-Man Annual #10)

While she was imprisoned in Ravencroft, Dr. Kafka was having a hard time convincing Malcolm McBride he wasn't insane, neither he was responsible for Carrion's actions. To show him what "insane" is, she took him to Shriek's cell. When Frances saw him, she broke out of the cell specifically built to resist her powers, and escaped with Malcolm. She tapped into him with her powers, and re-activated the Carrion virus. Carnage was in a coma by then, and Demogoblin had been killed while saving a kid from falling debris, so Malcolm was all Shriek had left, and she wasn't letting him go, no matter how much he asked for it.

Spider-Man, suffering after a betrayal by Harry Osborn, beat her savagely without saying one word. When she begged him to stop, he hesitated, and she KO'ed him with a sonic blast. After that, she realized that the darkness in Spider-Man's mind was growing, and that if she could work it right, she could make him replace Carnage as her sadistic 'husband'.

By this time, Carrion was already taking over Malcolm's mind, but Malcolm was still attached to his real mother. So, Frances took him to visit her, and while she was trying to persuade her that Malcolm was hers (Shriek's), Spidey arrives to save her (Beatrice McBride). A confused Carrion attacks Spider-Man, because not knowing who to love, he sure knew who to hate. Spider-Man bursts in anger at Carrion's ingratitude ("I turned the city upside down to find you, and this is what I get in return? I should let this virus devour you to death. Tell me Malcolm, why should I care?").

While Spidey vents his anger at Carrion, Frances smiles, realizing he's close to his fall. But Beatrice McBride stops him, appealing to his conscience. Now it's time for Shriek to get angry. Realizing Spidey could never be a "good" father to Carrion, she blasts him with a sonic burst. Then she tells Carrion to choose between her and his mother. He uses his power against himself in return. When Shriek sees that Beatrice is ready to die just to embrace her son before he dies, something triggers inside her. She absorbs the Carrion virus from his body and collapses, leaving Malcolm free of the Carrion curse. Spidey took her back to Ravencroft.

In the beginning of the Clone Saga, the Jackal invaded her cell and removed the virus, she was nurturing like an unborn child (this woman has severe issues), from her body. Shriek was never seen since, apart from a cameo or two in Ravencroft.

Frances's therapy continued with Dr Tanis Nieves after Dr Kafka was terminated from her job at Ravencroft. The therapy had made a good deal of progress with her, as she was now uncomfortable being around the Carnage symbiote as they were being transferred to a biomedical research lab. Her empathy powers helped feed the emaciated alien, which had been left for dead in earth's orbit by Sentry. Naturally, the alien escaped, prompting the facility's security to try and take Frances to a secure location. They were stopped en route by Doppelganger, who had also been found to be alive. The guards tried to kill it, but the old Shriek returned, killing the guards and telling Doppel that she forgot how much fun it was to do that sort of thing.

Shriek later found Dr Nieves, who was still in shock after being bonded to the symbiote after Kasady escaped. She couldn't help rubbing it in her former doctors face that part of the symbiote was still alive in her mechanical arm. (The symbiote had been used as circuitry in a new line of artificial appendages.) She wanted to know why Nieves wasn't nurturing the creature, as the doctor has always encouraged Frances to be more caring and loving. Instead, Nieves cut off her own fake arm, which Shriek took and bonded with.

After she and Doppel escaped from the facility, she tried to help Carnage by using her sonic powers on Iron Man and Spidey. He told her to butt out and she amused herself by making the citizens around her go mad. A man's head was smashed against a wall, a woman strangled a dog and a mob of citizens attacked a bus full of school children. All the while, Frances taunted Dr Nieves about how successful her therapy had been. Even the symbiote bonded to her was creeped out and turned to Dr Nieves. Nieves resisted at first but knew she had to save the bus of kids. The alien bonded to her to become Scorn and Nieves put Frances in a coma. If she ever wakes up, she will be put on trial for the murders of the two security guards.

She eventually came out of the coma and joined Kasady on a nationwide killing spree. She saved him near Tulsa, Oklahoma, from the mercenary called Deadpool. (Deadpool vs Carnage #1)

Shriek stayed out of the following fight, only hitting Deadpool with another blast after he was weakening Carnage with a sonic device. She then helped Kasady escape after Deadpool tried blowing him up with grenades. She was again at Kasady's side as they left Chicago after another random murder. As they drove away in a convertible, they heard Deadpool's voice taunting them. He had left a radio transmitter in the backseat, so he could talk to them from the farm harvester that was carried on the flatbed ahead of them. He turned on the machine and tried to roll over the convertible, knocking out Shriek in the process. (Deadpool vs Carnage #2)

Carnage escaped with her, loading her unconscious body into a hijacked family's car. She came to after they arrived at a ghost town and Carnage had killed the family. She stayed behind while Carnage dealt with Mercury Team, their symbiotes and, Deadpool. (Deadpool vs Carnage #3) At the Carrington Psychiatric Institute, Carnage took the doctors and patients hostage. He wanted to know if what Deadpool said was right, that there was a higher force guiding him. The doctor that spoke up didnt last long, and Carnage was soon sniped at by Deadpool through a window. Shriek tried to defend herself against Deadpool and blasted what she thought was the symbiote enhanced dog, but was the disguised Deadpool. She thought she had killed Carnage and fled. Deadpool later caught up to her and disguised her as himself with the symbiotes, which caused Carnage to attack her. She survived but badly injured. (Deadpool vs Carnage #4)

Frances later got to meet an old friend of hers after being recruited by Kraven the Hunter. Kraven had been hunting human/dinosaur hybrids in the sewers under NYC and had fought their protector, Venom. They had fought to a stalemate but when they met again, Kraven had Shriek with him. Her sonic blast knocked him across the sewer chamber and knocked him into a wall. She hit him again, causing a collapse of the sewer ceiling and a building above ground to collapse. She and Kraven fled and he was angry that she had buried Venom, keeping him from collecting Brock's head as a trophy. She told him if he wanted a trophy, he should join little league. Annoyed, he told her to stay out of the way as he began his hunt of the dino-people. (Venom #157)

She didnt last long after Venom escaped and took them on again. She hit him with a sonic blast but he stood up to the pain, grabbed her by the throat and threw her into Kraven. The killers were knocked out and taken by the SWAT team. (Venom #158)