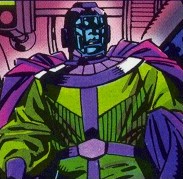 Kang is a descendant of Doctor Doom, born in the year 3000. Bored by the peacefulness of his era, he uses his ancestor's time travel technology, to journey back to ancient Egypt where he becomes the Pharaoh Rama-Tut. Defeated there by the Fantastic Four, he travels to the 20th Century and meets Dr. Doom, which inspires him to put together an armored and masked outfit. Then, he tries to return home but overshoots his time period and ends up in AD 4000, a time of constant war. There, he puts together an army and carves out an empire. He combines his own scientific talents with 40th Century weapons to become Kang the Conqueror. Then he travels back to the 20th Century, proclaims himself "Kang the First" and is promptly defeated by the Avengers.

From there, Kang's history gets complicated. He falls in love with Ravonna, a Princess from his era. When she is seriously wounded, Kang keeps her in suspended animation hoping to someday return her to life. He conquers the earth as the Scarlet Centurion in what becomes an alternate timeline. He seeks the Celestial Madonna in an attempt to rule all life. With his son Marcus the second Scarlet Centurion, he destroys much of Washington D.C. and forces the Earth to surrender to him but is finally defeated after great losses of life. All of the time traveling creates countless alternate versions of Kang. One of those versions gives up his conqueror role at the age of seventy-five and rules the realm of Limbo under the name Immortus.

In the first instance, Kang creates a Spider-Man robot, sends him to twentieth century Manhattan and has him apply for membership in the Avengers. When his application is rejected, the robot tells the Avengers that he knows where to find their missing colleague Iron Man. He sends them down to the Temple of Tirod in Mexico, which Kang has set up with various death traps. There the robot defeats Giant-Man, the Wasp, Thor and Captain America. But he is in turn defeated by the real Spider-Man who has followed the robot there. (But don't ask me how.) Spider-Man hits the robot's deactivation switch and puts an end to Kang's scheme.

In the second instance, Spidey learns that a strange force field has surrounded Avengers Mansion. He joins Iron Man in an investigation. The two heroes enter a hole into time and are picked up by Zarrko The Tomorrow Man who tells them that the Avengers have been kidnapped and are being held prisoner in his own 23rd century by an invader from the future. Iron Man and Spidey enter the well- guarded citadel of the invader and come up against Kang, who blasts them with a paralysis gun. With the guards all occupied, Zarrko sneaks in the back door and gets the drop on Kang. Zarrko announces that he has sent three "time bombs" to the Avengers' time. These bombs will regress the entire world to a more primitive time; all except a weapons depot in western North America. Zarrko plans to take this depot over and use the weapons to rule the regressed world. While he blabs about this, Spidey sneaks off to a room marked "Time Portal" and travels back to his own time. Seconds after he leaves, someone breaks into the room to disrupt the stalemate between Kang and Zarrko.

Back in the present, Spidey teams up with the Human Torch to disable the three "time bombs". The Torch notices that the time bomb radiation is similar to the negative zone that surrounds the Great Refuge, home of the Inhumans. So, Spidey takes one of the bombs with him to the Great Refuge and gets the Inhumans to turn it into a time machine. He and the Inhumans use it to get back to the 23rd century just at the moment that Zarrko is sneaking in the back door. The web-slinger and Inhumans break in just as Zarrko finishes telling his scheme to Kang. They are, of course, the mysterious intruders who enter shortly after Spidey uses the time portal to disrupt the stalemate. (It all works nicely except that Iron Man should still be lying on the floor as he was when Spidey left but is somehow imprisoned with the other Avengers now instead.) Spidey and the Inhumans defeat Zarrko and Kang only to discover Kang's body armor is empty. The Conqueror was never really there at all. He used a puppet and watched from a distance.

Technically, there is one other instance of Spidey and Kang appearing together: The Secret War. But again, the two do not meet.

Note: The issues listed below spotlight Kang's first appearances and his meetings with Spider-Man. I'm sure there's a good Avengers site somewhere that will fill you in on all of Kang's appearances.