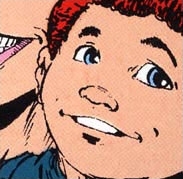 Normie Osborn has led a very full life for someone so young. His life has been in danger since before he was even born, but that's an unfortunate consequence of being the son and grandson of two Green Goblins.

”The Return of the Hobgoblin”

It was his notorious bloodline that caused his pregnant mother, Liz Osborn, to be kidnapped by the original Hobgoblin, who hoped to learn the secrets of the original Green Goblin. The criminal also threatened to "spare the world the birth of another mad Osborn" if Liz and his other captive, Mary Jane Watson didn't cooperate. Harry Osborn tried to intervene to save his wife and unborn son, but he also needed to be rescued by Spider-Man after the warehouse they had been held captive in caught fire. (Amazing Spider-Man #261) Liz gave birth soon afterward. (Amazing Spider-Man (vol. 1) #263)

”Trick of the Light”

Normie was nearly kidnapped a second time soon after his birth by none other than his own grandfather. Norman decided that Spider-Man would be the true heir to the Osborn Legacy and turned his attention away from Normie. (Peter Parker: Spider-Man (vol. 1) #25)

Normie was raised by his parents, unaware that his grandfather had faked his death and was living in Europe. As Normie grew older, he showed a strong hatred of Spider-Man, demonstrated by his repeated crushing of his Spider-Man action figure and muttering, "Kill the Spider...break his back...Kill the Spider...break his back." This hatred was probably caused by the fact that the second Hobgoblin (Jason Macendale) attacked his home, also looking for the secrets of Norman Osborn. (Web of Spider-Man #47)

Both Normie and Mary Jane were infected with SoHo sickness, caused by contaminated water. The chemicals had been dumped by Dagney Forrester and her brother Cedric. They were hoping to create a formula to create super powers, which made Dagney into Corona. (Spectacular Spider-Man (vol. 1) #176) Harry and Peter worked in an antidote for the illness, saving Normie but not Dagney. (Spectacular Spider-Man (vol. 1) #177)

The experience also unhinged Harry, who began to remember his own brief stint as the second Green Goblin, shortly after Norman's "death." His memories returning, Harry railed against Spider-Man, no doubt deepening Normie's own fledgling hatred of the hero.

Harry again became the Green Goblin, tried to kill Spider-Man and failed, losing his life in the process. Normie was at Harry's side and in Spider-Man's company when his father died, giving him one more reason to hate the wall crawler. (Spectacular Spider-Man #200)

Unfortunately, Harry did even more damage to Normie's young mind posthumously, when a trio of robotic Goblin women kidnapped the boy and tried to expose him to the toxic, strength enhancing Goblin formula. Again, Spider-Man came to the rescue, with the help of the reformed Molten Man (Spider-Man: Legacy of Evil).

”My So Called Superhero”

While Normie could have been killed (unintentionally) by a Green Goblin in his previous adventure, he was saved by one in his next. Liz Osborn became the CEO of Osborn Industries after Harry's death, which made her and Normie the target of a kidnapping and ransom plot by the criminal called Angel Face and her sidekicks: Salt and Pepper. Liz had set up a meeting with the heroic fourth Green Goblin (Phil Urich) and when she didn't arrive at the agreed time, the Goblin flew to her apartment and quickly disabled Salt and Pepper. Angel Face took the opportunity to flee with Normie to the parking garage, where he bit her, forcing her to let him go. She was ready to shoot the kid when the Goblin showed up and finger blasted the gun out of her hand. The Goblin's reward was a punch in the face from the angry brat, who screamed, "You're not my daddy! You're not!" (Green Goblin #8)

Peter Parker tried his best to steer Normie away from his dark heritage by being a positive role model (Spectacular Spider-Man Annual #14) but Normie was too aware of his father being the Green Goblin and eagerly awaited the Goblin's return.

After Norman Osborn's self imposed exile in Europe ended, he had a bionic construct (I don't understand it, either) dress up as the Goblin and kidnap Normie. The boy willingly went along with the impostor Goblin, believing it to be his father and Norman offered a ten million dollar reward for the boy's safe return, all part of a scheme to prove that Norman wasn't the original Green Goblin. While Spider-Man battled the fake Goblin, a civilian named Clarence Fielding rescued Norman Jr. from the junk yard when he was being held, despite the boy's protests (Spectacular Spider-Man #255).

While visiting the Daily Bugle with his grandfather, Normie was a bystander to an assassination attempt against Norman. Wilson Fisk was making his moves to return as New York's Kingpin of Crime and was systematically removing all of his competition. Norman had tried to oppose Fisk and take his place, which meant he had to be eliminated. Peter and Betty Brant were about to take an elevator to the Bugle's lobby (until they saw Norman and Normie inside) when Nitro, The Living Bomb, attacked Osborn. Peter shoved Betty into the elevator, which collapsed down the elevator shaft. The four of them were trapped, with Betty unconscious and Normie scared. Norman taunted Peter, telling him that the security cameras may still be working. Any attempt to use his spider strength to move the rubble would be seen by the guards. Norman was willing to let Normie die to protect his identity as the Green Goblin and refused to help move the heavy debris. Peter took the chance that the cameras were destroyed and shifted the rubble, saving Betty and Normie. Normie begged Peter to save his grandfather and Peter reluctantly agreed. (Peter Parker: Spider-Man #95)

In a way, Normie's next kidnapping was a lucky turn for the boy. After Norman Osborn had been defeated after the Gathering of Five ceremony, the cult of the Scriers faced a sort of civil war over the role of their deposed leader. A rebel Scrier named Matthew DeRoma kidnapped Normie in an attempt to draw Norman out into the open and be killed. A hologram of Harry Osborn was used to gain Normie's trust. After Spidey saved Normie yet again, the Harry hologram spoke to Normie in private, telling him that Spider-Man was his friend, that his grandfather couldn't be trusted and that Spider-Man had nothing to do with Harry's death. For the first time, Normie Osborn trusted Spider-Man and Spidey took the boy home to Liz. (Amazing Spider-Man Annual 2000)

”A Death in the Family”

That new found trust could easily be all that saves Norman Jr. from his increasingly unstable grandfather. In a subsequent battle with Spider-Man, Norman taunted Peter, saying "Fact is, the boy is too much like his father. Dirty genes cant be scrubbed out when the stain is that stubborn. Just imagine: The same pitiful traits as Harry, the same worthless soul, the same weakness...No. I cant have him weaseling his way in on all of the loot when I'm gone. I'll dispose of the little ape, as I should have done the day he was born." Filled with rage, Peter growled, "I'll kill you" (Peter Parker: Spider-Man (vol. 2) #46).

Recently, a new threat, unrelated to Norman Osborn, attacked Norman Jr. After Peter Parker revealed his secret ID during Civil War, the Chameleon joined Scarecrow, Will O the Wisp and coerced the Molten Man into holding Normie and Liz hostage to draw out Peter. (Chameleon had approached Molten Man to join while he was attending Normie’s baseball game. He threatened to have [Electro]] kill his nephew and friends if he didn’t comply.) Peter saved Normie and Liz with the help of the Black Cat and returned to Avengers Tower just in time to see that Aunt May saved herself from the Chameleon. (Sensational Spider-Man (vol. 2) #29-#31)

Normie's long awaited dream of his father returning turned into a nightmare. After Harry turned out to be alive (his death had been a trick, set up by Norman Osborn and Mysterio) Normie learned to hate his father. He came and went out of his life so many times and every time he came back, there was danger. While Liz and Harry argued, Peter took Normie to go play and found that Normie was keeping the severed heads of Spider-Man dolls under his bed. He had no time to ask him about it, as the Molten Man attacked Harry. (Amazing Spider-Man #581)

Naturally, Spider-Man quickly showed up and Normie demanded to know how Spider-Man was always involved in family business. Harry told him that Uncle Peter knows Spider-Man, which left Normie feeling betrayed by Peter. He wanted to know why they all cant just be normal and his parents told him that in a way, they are lucky. Harry seemed to be dead, but he was alive. Uncle Mark seemed to be dying but now was human again, thanks to Harry's cure (created by studying the second Molten Man, Charlie Weiderman). (Amazing Spider-Man #582)

Normie still held resentment of Spider-Man, which he showed after his mother became the majority shareholder of Horizon Labs. Horizon was then incorporated into OsCorp (which she had re-named "Allan Chemical.") Normie was with his mother and Tiberius Stone when they informed the Horizon employees of the merger. After they left, their limousines were stopped by the Superior Spider-Man, whom threatened Stone. Normie told Spider-Man that he was a bad man and that something should be done about him. Octavius continued to threaten Stone, until he was stopped by Spider-Man 2099. (Superior Spider-Man #17) An argument broke out between the two Spider-Men and 2099 was about to be flattened by a car when Tiberius Stone activated a device that set Otto's spider sense into overdrive. He dropped the car, nearly hitting Normie. The boy was saved at the last second by Spider-Man 2099 and Normie was taken to the E.R. by his mother. (Superior Spider-Man #18)

Normie was uninjured by the incident with the car and was soon back at the newly christened Alchemax Industries. As his mother was dealing with the fallout of the spider slayers going haywire and attacking Spider-Man and the police, she kept Normie from seeing her with a Goblin mask. (Superior Spider-Man #30) Soon after Otto Octavius had been wiped from Peter's mind, Spider-Man and Spider-Man 2099 arrived at Alchemax to confront the Goblin King. After defeating Menace, they came across Normie in Liz's office, watching the Goblins wreck havoc across New York. He was giggling to himself, whispering that it was all for him, because he was so special. He was led away by his mother, Tiberius Stone and Spider-Man 2099. After his grandfather was captured and revealed to be the Goblin King, Liz "accidentally" helped Norman escape. As she and Normie left, she whispered to him that it was all for him. (Superior Spider-Man #31)

Norman had promised to give Peter a job but it turned out to be nothing but babysitting Normie and Stanley. Normie told Peter, "Grandpa says you're so smart it makes you dumb." Later, Peter spoke with Norman about how the kids behaved. They did well despite the glue that got in Peter's hair. Also, there was pudding in his mask. (Amazing Spider-Man (vol. 6) #2)