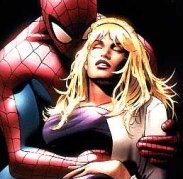 It all began when Aunt May handed Peter a letter from Gwen Stacy years after she had died. In the letter, she tried to tell Peter about something horrible, but there was only one page to the letter and the terrible secret wasn't part of it. His suspicions were aroused when he saw that the stamp was current and the post mark was from New York City, despite the fact that the return address was from France. Peter went to Gwen's grave to think things out, but was attacked by two strong, agile assailants dressed all in black. Peter was able to escape, but his agility gave away his ID as Spider-Man.

Peter put two and two together and realized that the strange letter and the attack were connected, and decided to give the back of the letter to the police to get any extra clues. He was called on his cell phone to an abandoned factory after the caller alluded to Aunt May being kidnapped. The factory blew up and the male figure pummeled Spider-Man. He was stopped by the female, who called the male "Gabriel" and he responded to her as "Sarah." Gabriel then promised Spider-Man that after all of this was done, he would understand why this was happening and why he deserved to die. Getting back to the police, Spider-Man finds that the police have found imprints of writing on the back of the letter. It was fragmented, but it revealed that Gwen was had been pregnant and named the children Gabriel and Sarah.

Peter was in shock over this revelation and needed to confirm it in his mind. He took a sample of DNA from Gwen's grave and the DNA from the saliva on the back of the stamp on the letter to a lab, but was stopped by Sarah. She wanted to be merciful and kill Peter right then and there, without getting the rest of his family involved. A quick battle ensued and Sarah was unmasked. The shock of seeing a Gwen look alike made Spider-Man freeze, giving Sarah time to escape. Turning to the computer, Spidey saw that the kids were indeed Gwen Stacy's. Outside, Sarah and Gabriel Stacy met and said that they now knew for sure that he was their father and that he killed their mother and abandoned them.

Returning home, Peter told what he learned to MJ, who had a surprise of her own for him. She told him that while she and Gwen were visiting Harry while he was going through his drug withdrawal, Gwen stopped to speak to Norman. MJ went to check on them after Harry calmed down, and she overheard Gwen and Norman arguing. Norman demanded custody of the children, but was refused by Gwen who planned to ask Peter to marry her and help her raise the kids. Norman demanded to adopt the two to make up for Harry Osborn, whom Norman considered a weakling and unfit to carry on his legacy.

Gwen promised that she would die before she allowed Norman to have custody of her children, a statement that cost her her life. On that awful day, Norman became the Green Goblin and kidnapped Gwen, pushing her off the George Washington Bridge in front of Spider-Man, killing her. After the Goblin was impaled in the following battle with Spider-Man, Norman came to and traveled to Paris to look after the twins. He raised them to think that Peter was their father and that he had killed Gwen. He intended to use them against Spider-Man in case he should ever die in battle.

The kids grew fast, a side effect of the Goblin Formula that they inherited from Norman's DNA. He was rarely around to play with them. In fact, when he was around, he made them repeat their life purpose back to him: "Kill Peter Parker. Kill Spider-Man." Much of the time, the kids wanted to play but were ignored by the servants. Even though they looked like teenagers, they were still children mentally. They would sneak out of the mansion in Paris at night to see the city, which is how they met a man named Bruce. Bruce was into smuggling, gambling and drug dealing. He soon saw how useful two young, naive and super humanly strong and agile gang members could be. He soon had them delivering drugs. When Bruce was removed from the criminal scene by Monsieur Dupres, he made them work for him. Gabriel soon got the idea to steal the drugs and sell them by themselves. Sarah didn't like the idea, so Gabe did it alone.

After Norman Osborn was captured by Luke Cage and Spider-Man, Sarah and Gabe traveled to New York to finish off Parker. After realizing the circumstances of their birth and how they were rapidly aging to death, he set out to help them. He set up a meeting with a TV crew and told Gabe and Sarah to meet him at the bridge. He tried to tell them the truth, but Gabriel lost control of himself and attacked Spider-Man. The police ordered everyone to surrender, but when no one complied, they opened fire and hit Sarah. Gabriel fell into the river but Spider-Man saved Sarah.

Gabe made his way to a safe house in the sewer that Norman had told them about, and there he found two Goblin costumes. A video of Osborn told him that it was time to accept his destiny. The Goblin Formula lay waiting for Gabriel and Norman's video told him that it would cure the aging factor and give him even more strength, even if it may damage his sanity. As Gabriel was taking the Goblin Formula, Spider-Man was giving Sarah a blood transfusion at the hospital. Her condition began to improve, just as the Grey Goblin smashed through the window. He grabbed Spider-Man, ranting and raving that he wouldn't make Sarah weak like him. Spidey, weak from the blood transfusion, barely managed to escape from the Goblin despite his increased strength. He was saved by Sarah, who refused to take the Goblin serum and told Gabriel that he was innocent with Gwen's death.

The Grey Goblin tried to kill Sarah, who shot out the glider's engine and caused him to crash into the river. He washed up on shore and was brought to a hospital by a family, his memory gone. Meanwhile, Sarah left Peter alone, who passed out from the battle.

The twins were gone for several months, until Peter got a call from a French hospital saying that Sarah had tried to commit suicide. He was listed as her emergency contact and went to see her. It was there that he learned her back story, and also discovered the plot by Monsieur Dupres to have her killed unless she gave back the $1.5 million that Gabriel stole from him. She claimed that she didn't know where her brother was, but he had been staying with her in Osborn's Paris mansion. His sanity was still fragile, and managed to escape after MJ showed up to check on Peter. Gabriel thought Mary Jane was Sarah and tried to protect her when Spider-Man showed up. He flew away on a glider, still thinking that MJ was his sister. Sarah, with the help of Interpol, managed to capture Monsieur Dupres and she joined the organization in order to find her brother.