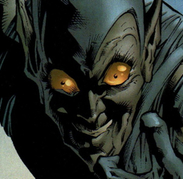 The story of the Stacy twins is told in the Sarah Stacy section. Gabriel is much more dangerous and unstable than his sister. This was true even before he was exposed to the Green Goblin Formula for the second time. While Sarah only wanted to kill Peter Parker for what they thought he had done to them and their mother, Gabriel wanted to kill his entire family and everyone he knew.

While Sarah and Gabriel grew up in France, their "uncle" Norman Osborn (who was really their father) taught them to be strong and to be rightful heirs to the Osborn Legacy. Norman favored Sarah over Gabriel, whom he considered "unpredictable," "unfocused" and ironically, the less responsible of the two. Norman proved to be right.

When Gabriel and Sarah left the mansion in Paris at night as children, they became the gullible servants of the local drug merchants. Then their original employer was removed and replaced, Gabriel decided to steal $1.5 million worth of their new boss's drugs, which he and Sarah would sell on their own. Sarah was against the idea, but Gabriel did it behind her back. After the Grey Goblin was defeated after his first encounter with Spider-Man, Sarah took him back to France.

Unfortunately, their problems with the French underworld were waiting for them. Monsieur Dupres wanted his money back, but Gabriel was fully psychotic after taking the Goblin Formula and becoming the Grey Goblin. Sarah defended her brother, becoming the target of Monsieur Dupres. Spider-Man, Sarah and Interpol captured the drug dealers, but Mary Jane (who came to France to check on Peter after he had been gone for so long) became the target of Gabriel.

MJ arrived at the Paris mansion that Peter and Sarah were staying at, only to find a dangerously unhinged Gabriel. In his delusional state, Gabriel believed MJ to be his sister and tried to protect her from Spider-Man. Spidey got MJ away from him, only to leave a very confused Gabriel to fly away on a glider. He has not been seen since, but Sarah and Interpol are looking to capture and cure him.

He turned up in New York, with a grudge against his half brother, Harry. He believed that Norman had always cared more for Harry than for him and that he had to eliminate his competition. (I'm sure that Harry would not have agreed with Gabe's assessment of Norman's feelings. This also takes place after Mephisto erased the world of all knowledge of Peter's ID, so Gabe didn't know that Peter was Spider-Man.) Harry had renounced his father and all claim he had to the Iron Patriot armor, which Norman had built for him after he became the head of H.A.M.M.E.R. As the suit could only be activated by someone with Osborn blood, it was fairly clear who was suddenly appearing as Iron Patriot.

Gabriel had shifted from a split personality between Gabriel and the Grey Goblin to a split personality between Gabriel and the Iron Patriot. He was being controlled by the jailed Norman Osborn, via a radio in the armored suit, letting Gabe think that the suit was talking to him. Harry, despite having a broken arm from when Gabriel shot him in a murder attempt, managed to defeat him by using the suits self destruct switch. It had been built for him after all, and Gabriel hadn't bothered to reprogram it. Gabriel ended up in jail, with a new Iron Patriot suit being delivered to him.