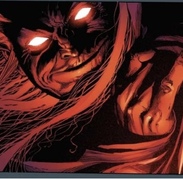 In the beginning, there was a race of Elder Gods, who were the first life forms on earth and degenerated into demons. Many of these beings were destroyed by the Demogorge, who later became one with the sun. The remaining energies spawned a new race of demons, one of which was Mephisto.

Mephisto and his brethren took advantage of the human concept of evil and each of them used the name Satan as needed. Mephisto also took part in countless alliances with other demons in other realms, forming the Lords of the Splinter Realms. No one can make a deal like Mephisto.

He uses chosen mortals as "spirits of vengeance," who further his cause on earth. (One of the most well known spirits of vengeance is Ghost Rider.) This has gone on for all of human history. In 987 A.D., Mephisto gave eternal life to the English Sect of Chasidm. In return, he wanted souls. In 1349, he lost a bet to Morgan Goth, who gambled his soul to survive a plague.

In modern times, he helped a young woman named Cynthia von Doom end the cruel reign of Baron Sabbat. The power granted to Cynthia wiped out all of the children in a village and Cynthia was killed. Years later, her son Victor von Doom, would become obsessed with releasing his mother soul from Hell. Each Midsummer's Eve, Doom and Mephisto's demon's would battle for Cynthia's soul. She was eventually freed with the help of Doctor Strange.

Mephisto became fascinated by earth's newly emerging super beings, especially the seemingly pure Silver Surfer. He met the Surfer soon after he arrived on earth and saw him as a challenge. Mephisto needs humanity to stay uneducated and savage, that way he can continue to populate Hell with their souls. The Surfer's mercy and nobility threatened to change that.

He battled Reed and Sue Richards after an exorcist named Elspeth Cromwell tried to exorcise the "demons" that gave them their power. Empowered by a dark mystical energy, Mephisto took all three souls, plus that of Franklin Richards. However, Franklin's huge mutant powers tore the demon apart.

Reborn from the evil inherent in humanity, Mephisto eventually regained the six shards of his soul. He went on to torment Thor and sought the valuable souls of the Scarlet Witch and the Invisible Woman.

Spidey faced Mephisto one Christmas, after seeing what he thought was a shooting star falling toward Manhattan. He headed toward the site of impact and found a hole had been slammed into the earth and put a subway full of passengers in danger. After saving the travelers, Spider-Man fell even deeper into the hole and soon found himself in Hell. Spidey was greeted by Mephisto, who revealed that the meteor had really been an angel falling to earth. Not just any angel, but the living Spirit of Christmas. Spider-Man's appearance was unexpected, but welcome. Seeing a chance to make a wager, Mephisto offered Spidey a deal: if he could save the angel from his trap, Mephisto would set both of them free. If he failed, the angel died and the demon took Spider-Man's soul.

Guessing that the angel was a source of hope for humanity, Spider-Man agreed and flung himself into the steel jaws of the trap to held it open. The strength of the trap was too much, and it snapped shut killing the angel in a burst of feathers. Mephisto happily claimed Peter's soul, a small orb with a terrified face. He then returned the soul to Spidey's motionless body, claiming that he was irritating and not worth the effort. Mephisto then went to earth to see how he had filled humanity with despair and was stunned to see New Yorkers singing carols in the street. The angel then appears to Mephusto, alive and well, telling him that his existence is caused by mankind's joy and hope. The angel told Mephisto that even he showed mercy when he allowed Peters soul to return to his body. Mephisto returned to hell in a rage and Spider- Man was returned to earth and to his wife. (Marvel Holoday Special 1993)

"Lo, There Shall Come a Champion!"

At one point, the immortal being called the Beyonder threatened to erase Mephisto's realm and all of reality from existence and the demon devised a ruse to spare himself. They made a wager and the Beyonder chose a champion for each of them to battle in terms of morals and ethics. Beyonder chose the demon Zarathos, a spirit of vengeance whom hated Mephisto, for himself and Spider-Man to fight for Mephisto. Meanwhile, Spider-Man learned of a plot to kill Wilson Fisk by a group of thugs. He pondered whether or not he should save the mobster's life when Zarathos appeared as the Green Goblin, warning him to stay away from Fisk, saying that he deserved to die. Zarathos also appeared to Peter as his parents, Gwen Stacy and Captain George Stacy, all telling him that he was a disappointment. The final blow came as the Spirit appeared as Ben Parker and told Peter that he could have used his power to become rich and famous. As the taunts weakened Spider-Man will to be good, the demon showed its true form. Confused by the strange events, Spider-Man still managed to defeat Zarathos and get to the scene of the attempted assassination of the Kingpin in time. In the end, Zarathos was returned to Hell and the Beyonder granted the universe the right to exist for another 24 hours. (Amazing Spider-Man #274)

After Norman Osborn framed Spider-Man for the murder of mobster Joey Z, Peter was forced to continue crime fighting in four separate identities: Ricochet, Prodigy, Dusk and Hornet. After his name was cleared and he went back to the webs, the four identities were taken by four teenagers. Led by an aged former superhero called the Black Marvel, the "Slingers" did what they could against New York crime. Unknown to them, their powers came from Mephisto, who made a deal with the Black Marvel to be a hero again. The Slingers traveled to Hell to free Dan Lyons after his soul was claimed by Mephisto. (Slingers #1-#12)

"The Legend of Sleepy Hollow, Illinois"

Yet again, Mephisto's soul was shattered and rained down on earth in 666 pieces. The shards reanimated the recently dead, such as the Jack O'Lantern (Steven Levins). Jack O'Lantern formed an army of the dead in Sleepy Hollow, Illinois and was defeated by Ghost Rider. (Ghost Rider #8-#10)

After reforming himself from the 666 pieces, Mephisto made an offer to a desperate Peter Parker. Peter's Aunt May had been shot by a sniper hired by Wilson Fisk and didn't have long to live. Peter begged help from Doctor Strange, Doctor Doom, Doctor Octopus, Reed Richards and others, but none could help. Despondent, he came across a woman who revealed herself to be Mephisto. In return for saving May's life, the demon wanted something from Peter. Not his soul. Souls that are claimed after saving someone's life spend eternity in torment, but still have a sense of happiness that their sacrifice is noble. Instead, he wanted Peter's marriage. Peter and Mary Jane's souls would forget that they were once united, except for a small part. That tiny fragment would scream out in loneliness forever, bringing much pleasure to the Lord of Hell.

MJ took the deal, and whispered something to the demon before the spell was cast. After the deed was done, Peter woke up and found his aunt happily making breakfast for him at her home (which was no longer burned by Charlie Weiderman). He and MJ had just broken up from a long term relationship (in everyone's minds) and Harry Osborn was alive again. He claimed that he had been in Europe. This seemed to surprise no one.

"One Moment In Time"

It turns out that Mephisto stopped the Parker marriage by altering a minor event in time. Shortly before the wedding, Spider-Man captured Electro after he escaped from an armored car. Spider-Man had originally foiled the heist and captured everyone involved, but after Mephisto's interference, one of the hired thugs escaped police custody and went on a rampage. Spider-Man again had to chase him down, which actually led to his momentary defeat by the overweight criminal. (Facepalm.) This made him late for the wedding, making MJ end their engagement. The petty thug returned years later, during the Superhuman Civil War, and tried to kill Anna Watson. MJ couldn't take all of the danger of people trying to hurt their loved ones and she left for California to pursue her acting career. It was there that she met and started dating Bobby Carr.

Mephisto's estranged son, Blackheart, concocted a scheme to bring Hell to Earth in Las Vegas and have the Inferno sweep across the globe. However, the scheme was halted, but not ended, by Dr. Strange and Damian Hellstrom. Fighting in the affected area of Sin City was done by the Red Hulk, Ghost Rider, X-23 and Agent Venom (Flash Thompson)). Blackheart contacted his father to taunt hi with his victory, but Mephisto was less than impressed that "a small bit of hell now touches a small bit of earth." Blackheart promised that he would rule all of the souls of earth and would torment his father for eternity. (Venom #13)

After Red Hulk, Venom, Ghost Rider and X-23 were killed by Blackheart's goons, they went to Hell and were treated to their perfect lives. Flash was made into the new Spider-Man, Hulk was named a hero to his country, Ghost Rider became the protector of her native Mexico and X-23 destroyed Weapon X with the help of Wolverine. Mephisto then turned their dreams upside down and had their perfect lives end with the death of loved ones. They then awoke from their hallucinations and realized they had died and gone to hell, and Mephisto explained that the torture of hades can be made worse by showing them their dreams. He offered to send them back to earth to defeat Blackheart if they promised to make a covenant with him. At some point on earth, they would owe him a favor that they could not refuse. They agreed. (Venom #13.3)

The four eventually defeated Blackheart by joining the Venom symbiote and the Spirit of Vengeance to the Red Hulk. Returned to Hell, Blackheart groveled to his father to be given another chance. Mephisto returned his son to a casino, as a bathroom washer for a burrito buffet. (Venom #13.4)

Deadpool was hired to kill Peter Parker after being led to believe that he had conducted some nasty experiments at Parker Industries. After "befriending" Spider-Man to learn more about Peter, he does kill Mr. Parker. After Peter arrives in Hell, he is met by a smug Mephisto, who told him that he is the architect of Peter's greatest failure. He wanted Peter to know that no matter how many or how great his victories, his soul will always feel empty. He will always be lonely. He was resuscitated by Deadpool, who learned that Peter was a good person. (Spider-Man/Deadpool #5)