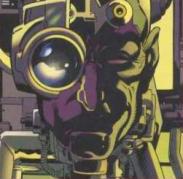 Professor Mendel Stromm is a brilliant but unscrupulous scientist who was once Norman Osborn's partner in Osborn Industries. While there, Stromm invented a formula that granted increased strength and a powerful healing factor but he also made the mistake of embezzling from the company. Discovering this and wishing to get a hold of Stromm's notes for himself, Osborn had his partner arrested. Much later, in trying to analyze the formula, Osborn created a chemical explosion which gave him power and led him to become the Green Goblin.

Stromm remained in prison for ten years. During part of that time, he was the cellmate of Frederick Foswell. Outwardly a model prisoner, Stromm planned revenge against Osborn all along. Upon his release, Stromm aided by his hoodlum assistant Max Young, created two robots, both of which he could control with a headpiece which covered his right eye with a device that looked like a camera lens cap. One robot was a green blob with tentacles, the other a walking stove pipe with a destructive laser beam. Stromm sicced both robots on Norman Osborn but his plans were foiled by Spider-Man. Realizing that Stromm was behind the attacks, Osborn, using his Goblin Glider to reach a second story window, attempted to kill his former partner with a rifle. Although the shot missed thanks to Spider-Man's intervention, Stromm suffered a heart attack and seemingly died.

Stromm was buried in the family crypt where a "prearranged signal" lowered his coffin into a hidden laboratory underneath. There his memories and knowledge were downloaded into an android that looked exactly like him. Calling itself the Robot-Master, the android began creating robots and selling them to terrorist organizations. Spider-Man intervened and destroyed the android Robot- Master, capping off the fight by writing "Died Again" in webbing on Stromm's mausoleum. Not one of the web-slinger's more tasteful moments.

In the meantime Norman Osborn, believed dead and hiding out in Europe, received word of the android Robot-Master and thought this meant that Stromm was still alive. Recalling that Stromm created the Goblin formula that allowed him to cheat death and learning that Stromm had tested an earlier version of the formula on himself, Osborn sent his Scriers to determine if Stromm had cheated death as well. The Scriers stole Stromm's body and brought it to Europe where Osborn discovered that Stromm was in suspended animation, though withered and decayed over the years. Osborn used his scientific knowledge to revive his old partner but Stromm was left in a weakened state; his body useless, like a living corpse. Osborn promised to restore Stromm and provide him with "a special life-support suit of armor that gave him back his mobility" in exchange for services rendered. In this new guise, Stromm became known as Gaunt. Doing Osborn's bidding, Gaunt went to co-opted scientist Seward Trainer and coerced him into rigging a test so that clone Ben Reilly would come out as the real Spider-Man and Peter Parker would come out as a clone, prompting Reilly to take over the role of the web-slinger.

Overseeing Multivex, a "pet corporation set up through Osborn Industries", Gaunt kept Seward Trainer by his side, forcing the scientist to investigate ways to restore his withered body. At the behest of Norman Osborn, Gaunt hired the cybernetically-enhanced Hobgoblin (Jason Macendale) and the cybernetically-enhanced group known as Cell-12 in an attempt to destroy the lives of Peter Parker and Ben Reilly. Later, Seward's attempt to restore Gaunt was broken up by Spider-Ben, Peter, Mary Jane and the Molten Man, destroying Multivex in the process.

Gaunt severed his connections with the Hobgoblin, telling him that killing Spider-Man was forbidden. He tried to kill the new Green Goblin (Phil Urich), however, following the wishes of Norman Osborn who was insulted by the unauthorized use of his equipment. Gaunt hired Arcade to do the killing but the Goblin escaped the trap.

Within the ruins of Multivex, Seward Trainer finally succeeded in revitalizing Gaunt. When Seward decided to warn Ben and Peter about Norman Osborn, Stromm placed himself in a powerful robotic armor and pursued Seward literally right into Osborn's hands. Osborn strangled Seward and ordered Gaunt to murder Ben Reilly. When Gaunt failed, Osborn appeared to murder him using a Goblin finger blast. Whether through the Goblin formula in his veins or Osborn's intent, Stromm did not die but lost his memory instead. Unaware of the last nine years (including Ben and Peter's secrets), Stromm instinctively made his way to his old lab where he began making toys and anonymously delivered them to children's hospitals. Spider-Man (Peter again) tracked him down and inadvertently triggered his wrath by mentioning the name of Norman Osborn. Stromm donned a spare suit of armor and unleashed his original robots on Spider-Man but was subdued and put into the care of psychiatrist Dr. Ashley Kafka.

Retaining his hatred of Spider-Man, Stromm tried to create a new computer to directly interface with his robots but the computer consumed him instead, destroying all but his head and extending itself under the streets of New York. Stromm managed to contact Spider-Man and begged the web-slinger for death to stop the machine from taking over everything. Spider-Man could not bring himself to kill Stromm. Instead Peter Parker had his hacker friend Shea Tinker create a loop program that put Stromm and the machine into suspended animation.

An anonymous tip (most likely from Spider-Man or Shea) led the FBI to a malfunctioning electrical substation where they found the comatose Stromm. The feds found a way to wake him from his coma/suspended animation and Stromm willingly joined the pro-Registration side of the Superhuman Civil War. The FBI offered him a new life and he was placed into the witness protection program, which landed him on a beautiful estate in southeastern Vermont. Some time later, Penance (aka Robbie Baldwin, aka Speedball) stole valuable information from Thunderbolts Mountain, which included the current whereabouts of Stromm. Penance broke into Stromm's estate and destroyed the Robot Master's numerous robotic guards. Stromm was then forced by Penance to find a way to activate the launch codes for nuclear missiles that were aimed at Latveria (as well as a good portion of Europe too!), where Nitro was being held as a prisoner. However, Penance's use of Stromm and the nuclear codes were just a diversion so that he could distract Osborn and Stark as he then stole the Falcon aircraft in order to confront Nitro in Latveria.

Stromm was last seen in the hospital and is presumed to have remained in protective custody by the FBI and SHIELD.