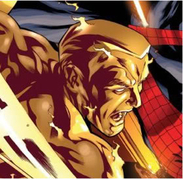 ”The Menace of the Molten Man!”

The Molten Man was known for a good portion of his life as Mark Raxton, a lab assistant for Spencer Smythe (inventor of the Spider slayers), and the stepbrother of Liz Allan, a longtime friend of Peter Parker. One night, Raxton stole a strange metallic alloy derived from an organic meteor he and his boss had been experimenting on. Raxton, however, spilled the alloy all over his body, transforming him into the Molten Man! The metal alloy made his skin impervious to damage, gave him super-human strength and granted him the ability to increase his body temperature to super-heated degrees.

His powers were far from stable, as the heat within him was slowly burning him alive. Still a scientist by profession, Mark tried to reverse the meltdown by experimenting with stolen radioactive meteorites. A nosy boarding house maid got suspicious and called the Daily Bugle to report a strange boarder and Ned Leeds arrived to check it out. Ned arrived just as Mark finished his experiment, exposing the reporter to radiation poisoning. Ned was taken to the hospital by Peter Parker, who was also made ill by the radiation. Molten Man made several attempts on Ned's life but was consistently saved by Spider-Man. Raxton made one last robbery of the meteors but never got to use them, as the following battle with Spidey ended with the super heated crook falling into a freezing river.

Raxton spent most of his super villain career seeking desperately to find a way to reverse his condition. After a fight at the suburban home of the now-married Liz Allen Osborn, a quick dousing into the pool put out his fire. Since then, Raxton has worked side by side with Spider-Man more than once. While still a bit of a (ahem) hothead, Raxton seems to have switched to the side of the angels... at least for now.

Life has not been easy for Mark Raxton, as his dysfunctional family and criminal past has caused him countless headaches. His brother in law gave him a job at the Osborn Chemical factory, but this seeming struck of luck turned bad. He was coerced by Tombstone into stealing an experimental plant preservation chemical called DIOX-3 from Osborn Chemical. The robbery was foiled by Spider-Man and the Green Goblin, as Harry Osborn was attempting to reform himself at the time. Spider-Man vouched for Mark's innocence when the police arrived and Harry gave him a job as head of security at the factory. (Web of Spider-Man #66 & #67)

As Harry's sanity continued to fall apart, Spidey asked Mark to keep an eye on him. Harry kidnapped Mark, Liz Allan and Norman Osborn, Jr., and forced them to sit together at dinner as a family. As Harry ranted and raved about how the Osborns would rule New York, Raxton activated a spider tracer that Spider-Man had given him, which alerted Spidey to the danger. After Harry beat the Molten Man into submission for alerting Spider-Man, the Goblin was defeated and sent to prison. (Spectacular Spider-Man (vol. 1) #189)

Mark had been forced to relocate to a new job in a California OsCorp plant by Harry (after Harry got out of prison) and wasn't able to aid Spidey when Harry seemingly died in battle. He was much more helpful when Norman Jr was kidnapped by a trio of robotic Goblin women. Harry created the robots to kidnap and expose his young son to the Green Goblin formula, not knowing that the chemicals were toxic. Liz called her step brother to watch Spider-Man and Daily Bugle reporter Ben Urich's backs. He protected Urich as Spidey battled the Goblin robots and destroyed the mind control device that Harry used on Liz. (Spider-Man: Legacy of Evil)

While Carnage and his “family” was tearing apart New York City and spreading a riot, Mark was keeping his friends and family safe. When May Parker and her brother-in-law and sister-in-law were arriving at Liz’s apartment for safety, they were confronted by a street gang called the Bedrocks. Flash Thompson tried to fight off the gangbangers but got beaten up pretty quickly. Molten Man stopped the beating and scared off the gang. (Spider-Man #36)

Mark had advanced to chief of operations at OsCorp when he got wind of another company, MultiVex, skimming funds away from OsCorp. He broke into the MultiVex headquarters to access their database when he was confronted by Ben Reilly and Peter Parker. Both Spider-Men had been attacked by goons that led them to believe OsCorp was involved. Ben only knew Raxton as a criminal and instantly assumed he was behind the assaults.

Three stories down in the MultiVex building, Seward Trainer and Gaunt were going about healing Gaunt's withered body. Molten Man's heat powers melted through the floors and landed the three of them into the rejuvenation room. Gaunt, desperate to be human again, ordered the guards to kill the Molten Man but keep the spiders alive. Naturally, the ensuing fight destroyed the rebirth machine and the building. In the end, Ben and Peter had no answers as to who had attacked them, besides Gaunt's taunt that it was someone from their past.

Mark was next used as a pawn by Norman Osborn, who used mind control to make Raxton attempt to assassinate Alison Mongrain, whom Norman considered a threat to his plans. Mark was stopped at the last minute, when Joe Robertson got rid of the homing device that allowed the Molten Man to follow them. (Amazing Spider-Man #441)

”The Lethal Foes of Peter Parker”

Raxton continued trying to turn his life into a more positive direction by becoming a mentor to Normie, but this backfired when the Chameleon threatened to kill the boy unless the Molten Man agreed to join the Deadly Foes of Spider-Man (made up of Swarm, Will O the Whisp, Electro and Scarecrow). He reluctantly agreed but was defeated. (Sensational Spider-Man (Vol. 2) #29-#31)

Scarecrow and Molten Man were later used as bait to draw out Captain America's New Avengers, but instead brought out the Punisher. The incident left Raxton badly injured. (Punisher’s Hit List)

Raxton's condition was still unstable and he was getting treatment hired by his step sister. His mental state also seemed to be declining, as he went on a rampage when a surprisingly alive Harry (and Peter Parker) showed up at Liz's home. Wanting to be protective of his step sister and remembering Harry's instability, he failed to realize that the fight with Spider-Man was destroying her home. In the course of the fight, Harry revealed the secret he had hoped would make Liz hate him a little less: a possible cure for Mark's condition. He had managed to find a cure after studying Charlie Weiderman, the second Molten Man. Mark was taken to a hospital and Liz thanked Harry. (Amazing Spider-Man #582)

Mark used technology from Liz's company to monitor his condition, making sure he wouldn't be a threat again. The treatments worked and he was soon starting a new life as Head of Security at Alchemax Industries. Mark escorted his step sister and her assistant, Tiberius Stone, to a meeting with the Department of Corrections as an example of what Alchemax tech could do to rehabilitate super-criminals. Their competition to get the D of C contract was Parker Industries. While Peter showed up to the meeting looking like the ruffled, disheveled nerd he had always been, Liz still worried that he might steal their contract from them. Raxton and Stone soon showed up at the Black Cat's hideout, looking to hire some assistance to squash Parker Industries bid for the deal. They hired an assassin with the moniker of Ghost to remove Peter. (Amazing Spider-Man (Vol. 3) #16)