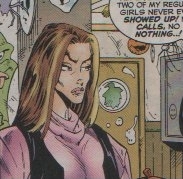 Alison Mongrain was hired by the Daily Grind coffee bar as a waitress. The Grind's owner, Shirley Washington, and her staff instantly noticed Mongrain's hostility. They assessed her as being "chilly", "frosty", and an "ice queen."

There was definitely something odd about her, as she added an unknown powder into a bowl of chicken gumbo, which was ordered by a very pregnant Mary Jane Parker. MJ went into a very "severe and complicated" labor according to the paramedics that were called to the coffee bar. Aunt Anna Watson tried paging Peter, but he and Ben Reilly were being kept busy by Gaunt and his robots.

At the hospital, MJ was greeted by Dr Folsome, who told her that her regular doctor was out of town and he would be delivering her baby. The delivery was quick, but painful. At first relieved to be finished with the labor, MJ was quickly worried when she realized the baby wasn't crying. Doctor Folsome gave Mary Jane his condolences and left the room with the rest of his staff...including Alison Mongrain.

Mongrain immediately left for the harbor, bringing a package with her. She spoke briefly with her employer, who told her to enjoy Europe and to make sure that the package was never seen again. Her employer? Norman Osborn.

In a subsequent scheme, Osborn took control of the Daily Bugle by threatening J. Jonah Jameson's family. His purpose was to use the Bugle to exonerate the Osborn name after Bugle reporter Ben Urich wrote a book naming Norman Osborn as the Green Goblin. The normally volatile Jameson was reduced to a lapdog by Osborn, and Robbie Robertson took it upon himself to take the Bugle back from Norman.

His investigations led him to Paris and to Alison Mongrain. Though both Mongrain and Osborn kept their ends of their bargain to each other, neither trusted the other. Alison considered using baby May Parker as blackmail against Osborn, and Norman considered Mongrain to be a loose end. To tie that end up, Norman implanted a painful mind control microchip into the back of the neck of Mark Raxton, aka the Molten Man. The chip would only stop causing pain once Alison was dead.

Once Robbie and Alison returned to New York, they were under constant attack from the Molten Man. Raxton was relentless in his chase, following Mongrain even after he fell into the harbor after battling Spider-Man. Mongrain, believing to be safe, wanted to go to the Parker home to tell Peter an urgent message. The ground beneath her suddenly erupted, as the Molten Man emerged from the sewer. A block of concrete hit Alison in the stomach, badly hurting her. Suddenly realizing that the Molten Man was following the necklace that Osborn had given to Mongrain, Robertson threw it away, where Mark destroyed it.

Their narrow escape took place outside of Peter and Mary Jane's home, and before she died of her injury, Alison finally told MJ that "May" was still alive. As soon as Spider-Man returned home, MJ explained what Mongrain had told her. Despite his wife's pleas to not let Osborn manipulate him any more, Spider- Man went to Norman's upstate hunting lodge to find his infant daughter. In the following battle with the Green Goblin, Norman told Peter that his daughter was dead. Ignoring his arch enemy, Peter stormed the hunting lodge, only to find that "May" was really his elderly aunt May Parker, who had supposedly died nearly a year before.

Ok, bear with me. Not that it really matters, but Mongrain may be alive again. Peter and Mary Jane ended their marriage by the demon, Mephisto. He made it so they had never been married in the first place. Since they were never married, they never had a child. If they never had a child, Mongrain couldn't kidnap her. If she couldn't kidnap her...you get it.