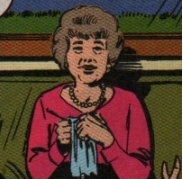 Mary Jane's aunt Anna Watson, older sister to her father, Philip Watson, always seemed to be the nice friend of Peter's Aunt May Parker. Anna invited May to live with her so they could help each other out as they got older, set Peter up with Mary Jane, brought him vegetable soup and comforted May when he left for college.

Anna, unlike May, tended to stay out of trouble when it came to New York's super criminal element. That changed when she was kidnapped by Alistaire Smythe, who thought he was taking Spider-Man's aunt, to be used as bait. Mary Jane held on to her aunt as she was taken by Smythe's flying saucer, and later managed to convince Alistaire that she was actually Spider-Man. This managed to buy Peter enough time to find and rescue the Watson's. (Amazing Spider-Man Annual #19)

Aunt Anna stayed a close friend of the Parkers and moved in with Peter and MJ after May Parker "died." Living with Peter exposed Anna to his unusual comings and goings and made her suspicious of how he could be gone for days at a time. She also didn't trust his habit of making last minute changes in plans.

Anna confronted MJ with her concerns but Mary Jane was just glad that she hadnt discovered Peter's secret. Instead of accusing Peter of being Spider-Man, she believed that he was having an affair. Returning home that night after being under the control of Calypso, Peter was confronted by a furious Anna Watson. MJ, tired of her aunt's nonsense, told her that Peter was Spider-Man. Anna believed that Mary Jane made up the story of Peter being Spider-Man to show her how foolish she sounded for accusing him of having an affair. She apologized and confessed to Peter that she had been married to a man named Jacob Hilliard after moving out to California to become an actress. She was 19 years old and married Jacob, a radio writer, within a month of meeting him.

Their romance quickly went stale and Anna soon met a singer named Johnny Dipalma while at an audition. He asked her to lunch and she soon convinced herself that she was in love. The guilt made her feel terrible. She stopped seeing Johnny and told Jacob the truth. She came back to New York and never told anyone that she had been married, not even May Parker.

She assumed that Peter hated her for accusing him of cheating on Mary Jane, but Peter said he loved her and he had nothing to forgive her for. She returned to Florida after May was revealed to be alive.

”The Last Temptation of Eddie Brock”

She took part in the seance with Madame Web to contact the comatose May after she was shot by a sniper hired by the Kingpin. (Sensational Spider-Man (vol. 2) #39)

“One Moment in Time”

Anna played a minor part in the ending of Peter and MJ's relationship. Due to Mephisto's tampering with the past, Peter was late to his wedding to Mary Jane, causing Anna to regret ever introducing the two of them and MJ to refuse to marry Peter. They did, however, stay in a relationship. Years later, the thug that caused Peter to be late to his wedding returned and tried to kill Anna. This caused MJ to leave Peter for good and head to California.

Anna had been diagnosed with dementia, which was greatly alleviated by drugs from Krakoan pharmaceuticals. Mary Jane was the brand ambassador for the medications, but since she was putting her face on the product, she had Norman Osborn check them, to make sure they were safe. Norman had been made into a good man after being shot by the Sin Eater's magic shotgun. (Amazing Spider-Man (vol. 6) #7)