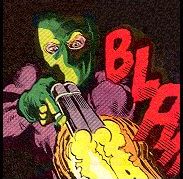 Stan Carter was a SHIELD Agent who took part in a program to test a drug supposed to increase his strength and resistance. It drove him insane, so the scientists had no choice other than to purge the drugs from his system and suspend the program. Soon after that, Carter abandoned SHIELD and became a Sergeant in New York's Police Department.

There, he met Captain Jean DeWolff, a friend of Spider-Man with whom Carter would have an affair. After his partner was killed, Carter sunk in depression. He started drinking, and the drugs' effects started coming up again. He was a very religious man, and in the midst of his insanity, he decided he was needed to vanquish the sins of a corrupt humankind, thus becoming the Sin-Eater. He first killed Jean DeWolff, for representing the legal system that allowed his partner's death. He took Jean's badge, and wore it to represent justice.

Spider-Man took Jean's murder really hard. He decided to work closely with the police in order to catch the killer. The man in charge of the investigation was none other than Stan Carter, who played Spidey for a fool. Later, Peter goes to a trial of some guys he captured, and gets mad because Matt Murdock (Daredevil) sets them free. Murdock recognizes Peter Parker as being Spider-Man. Later, in the Judge's chambers, Murdock tells him he feels dirty, but the Judge doesn't take him seriously. Then he detects another presence: he is able to dodge the shot from the Sin-Eater, but the Judge is not, and is killed. Sin-Eater escapes, and Spider-Man is alerted and confronts him outside the courthouse. When Spidey dodges a shot, it kills innocent bystanders. He notices the killer has Jean's badge on his belt, and that Aunt May (who went to the court with him) is uncounscious. The Sin-Eater uses that lapse of attention to flee. Daredevil, concerned with his secret ID, arrives too late and berates himself.

The funerals of Captain Jean DeWolff and the Honorable Horace Rosenthal take place in the same day. Matt Murdock, at the judge and his former teacher's grave, hears the heartbeat of the killer amidst the other funeral party, but is unable to catch him before he flees. Clearly Carter went to pay his last respect to Jean DeWolff. Later, Carter goes to confession. He tells the priest about his doubts in his difficult mission. The priest says he should follow his destiny. Carter thanks him, and kills him.

Days later, Spidey and Daredevil had combed the city and found no trace of the killer. At the Bugle, a surprised Peter is present when Sin-Eater barges in, wanting JJJ's head. Peter easily takes him down with the cylinder of a typewriter. The man was revealed to be Emil Gregg, the same who had been giving anonymous interviews to Globe journalist Eddie Brock (who later becomes Venom), and that had been revealed in that same morning paper by Brock, who didn't want to give in, but was pressured by the police to do so. After the cops arrest Gregg, Daredevil tells Spidey that that's the wrong man. They check Gregg's apartment, and they find a door to the next one: the apartment of Stan Carter. Daredevil finds a Sin-Eater costume there, and Spidey realises Jameson is the next target. Apparently, Gregg, a delusional man, heard Carter's delusions and plans, and thought he was hearing a divine voice. Thus, he believed he was the Sin-Eater. Spidey goes to the Bugle, whic he reaches just in time to save Betty Brant from the Sin-Eater. When he unmasks Carter, he begs for forgiveness, but Spidey doesn't give in and he brutally beats him, with Daredevil being the only reason why Carter survived, as he attacked Peter to stop him.

When a raging mob tried to lynch Carter outside the police station he was being held in, Spidey and Daredevil watched on the station's rooftop. Spidey decided to ignore it and leave, as Daredevil tried to save Carter. He couldn't do it alone, and he called out "Peter!". Spidey then came to his senses and rescued them both. Carter was returned to police custody, and Daredevil revealed himself as Matt Murdock to Peter.

Months later, a panel of psychologists deemed Carter was cured, since SHEILD assured that there was no longer any trace of the drugs in his system. Only this time, Sin-Eater resided in him as a split personality. The Sin-Eater persona walked around to his eyes only, and he shrugged off its arguments. When Spidey hears of his release, he goes to his place, where he discovers the traumatic truth: he left Carter permanently injured. Carter comes off as a really repented guy, and Spidey can't handle the guilt and leaves. Sin-Eater rejoices at Spidey's suffering, and Carter tries to hit him with his cane. Of course, you can never really hit a figment of your imagination.

Meanwhile, Spidey's guilt prevents him from capturing Electro, as he's afraid of laying a punch after witnessing what he did to Carter. Electro takes the chance and almost kills Spidey, leaving him alive only to humiliate him more. After Electro leaves, Carter prevents a mob from catching Spidey by threatening them with a toy gun.

After being unable to get a job, Carter accepts the pressure from a P.R. agent who was trying to make him write a book. He's slated to show up in a talk-show, which prompts the anger of Spider-Man. Furious at Carter trying to make money from his past, they argue live until Carter reveals that Spidey knew nothing about Jean DeWolff, that they were lovers. Shocked, Spidey was ready to leave, when Electro arrives. He challenges Spidey to a fight, but he's afraid to do it, so Electro leaves laughing while Spidey is humiliated on national TV.

Deciding to make peace with Stan, Spidey drops by his house, and Carter tells him to exorcise his own demons, as he's the only one who can do it. Spidey leaves to exorcise Electro, who was holding up a power station and leaving the city in the dark. Little did he know that by then, the Sin-Eater persona had become too strong, and that Carter couldn't help it. He puts the mask on and decides to go to the station too, to do some exorcising of his own.

At the station, Spidey faces his fears and takes down Electro. Outside, the Sin-Eater faces the cops. Carter is taken down by the shots of at least 6 policemen, and as Spidey leaves the station, and dumps Electro in the arms of a cop, the Sin-Eater Persona dissapears, and Carter says that now that the Sin-Eater is dead, he can finally live. Spidey realises that Carter was so delusional that he thought that he and the Sin-Eater were two different people. Sergeant Tork, who was in charge of the police barrier around the station, tells him that Carter had the last laugh: Sin-Eater's gun wasn't loaded.