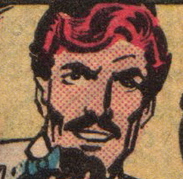 While Philip Watson is a rarely seen part of Mary Jane's life, he has also had an enormous impact on his daughter. From the time she was an infant, Philip was an angry, drunken tyrant. Despite Madeline's pleas for him to be quiet for the children, he would scream in the girl's faces. He blamed them for his lack of inspiration for the novel he wanted to write. The parents eventually divorced but the Watsons problems didn't improve.

Madeline and the girls moved in with Anna Watson in New York for a time, until they moved back to Pittsburgh to live with Frank Brown, Madeline's cousin. Frank was a hard man to live with. Despite being back in her birth city, Mary Jane had nothing to do with Philip and liked it that way. Upon visiting Anna Watson as a high school student, Mary Jane refused to go on a blind date with Peter Parker. Anna said he was a "quiet, sensitive boy." Sarcastically, Mary Jane replied that her father had been "sensitive" too.

Madeline eventually died of heart failure after years of struggling to care for her family. Gayle offered Mary Jane a place to stay in exchange for help raising her children, Kevin and Kristy, but Mary Jane wanted nothing to do with it. She refused to "waste" her life making others happy as her mother had. MJ ended up back in New York with Aunt Anna. It was then that she met her future husband, Peter Parker.

After accepting his marriage proposal, Mary Jane worried if she could stay married to Peter. Her parents had broken up, as had her sister and brother in law. She married him because she trusted him, more than she ever trusted anyone. (Ironically, years later she would end the marriage in a deal with the demon, Mephisto. It wasn't an act of fearfulness but of desperation after Aunt May Parker was shot.)

During a difficult time in the marriage (Peter was hiding his pain after Harry Osborn's death by being Spider-Man full time), Mary Jane went back to Pittsburgh to see her sister. She had acted the part of the party girl her whole life, to mask the pain of her childhood, but with all of the pain she was currently in, she didn't want to hide anymore. She believed that she had to make peace with the present by making peace with the past. Her family made her the person she is and she needed to embrace that fact.

The reunion with her sister went well, with both admitting that they had been selfish. Mary Jane shouldn't have run out on Gayle and Gayle shouldn't have expected her to help with raising the kids. She loved her sister and father and wanted them to know it.

MJ didn't sleep well before seeing her father again for the first time in years but eventually went to his apartment. He had long given up on writing a novel and was merely paying the rent with articles for a weekly newspaper. They made uncomfortable small talk before she saw a picture of her mother at Philip's typewriter. She resented that he had a picture of her, after he abandoned the family. He said that he kept the picture as a reminder of how much he loved his former wife and that he hated that he never let her know it. They agreed to stay in touch, that it was a new beginning.

Its unknown for how long MJ and her father stayed in touch, or if they even kept their promise to each other. However, Philip did have a long lasting effect on his daughter. After Mephisto prevented Peter and MJ's marriage, their daughter, May, was erased from ever existing. This was explained in the One Moment In Time story as a conscious decision on Mary Jane's part due to her past with her father. She told Peter that she refused to bring a child into an abusive situation, because she knew what it was like. She knew that Peter was nothing like Philip but the fact that he was Spider-Man made being in Peter's life extremely dangerous. MJ was willing to take that risk but not to bring a child into such an environment.