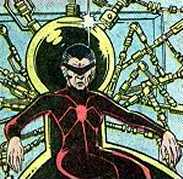 When girlfriend Deborah Whitman showed Peter Parker an advertisement for the psychic "Madame Web", he dismissed her as a fraud. But when a (very) hostile takeover of the Daily Globe left Spidey with only Madame Web as a possible clue, he paid her a visit personally. Using her psychic abilities, she gave Spider-Man enough clues to lead him to the criminals. Though Spider-Man was still skeptical of her abilities, they were erased when Madame Web called him at his Chelsea Street apartment with knowledge of his identity.

Months later, Black Tom Cassidy sought to add her abilities to his criminal organization, and sent his friend Cain Marko, the Juggernaut, to retrieve her. Madame Web, foreseeing this, called on Spider-Man to help stop the Juggernaut. Despite Spider-Man's efforts, the Juggernaut succeeded in reaching Madame Web. When he lifted her up, he unknowingly removed her from an elaborate life-support system that had been keeping her alive. Finding her thus useless, Juggernaut dropped her and left. Madame Web, barely alive, was taken to the hospital.

While Spider-Man visited her in the hospital, he discovered that the experience had left her with amnesia. Amazing Spider-Man #229-230

Years passed, and Madame Web, seemingly recovered, was contacted by Norman Osborn (first Green Goblin), to take place in the arcane ritual of the The Gathering of Five. During the ceremony, Madame Web seemingly died, but in truth was granted the power of immortality.

Looking much younger, a rejuvenated Madame Web called upon Jessica Drew and Julia Carpenter, the first two Spider-Women, along with Martha Franklin, who had also taken part in the Gathering of the Five ritual, to aid her in subduing her granddaughter, Charlotte Witter, who had become a third Spider-Woman at the hands of Doctor Octopus.

Currently Madame Web serves as a guide to Martha Franklin, who has taken up the mantle of the fourth Spider-Woman. See Spider-Woman (Vol.3).

Madame Web has somehow re-aged to her original appearance, but is still a very valuable ally to Spider-Man. He used her to find out why "the animals came out to play" after encountering the Lizard, Vermin, Man-Wolf, Stegron, Puma and the Black Cat. She revealed that it was all part of a plan by Stegron to re-make New York into a prehistoric paradise with the help of a crystal from the arctic. She has also helped Peter speak with a comatose Aunt May after she was shot by one of the Kingpin's assassins.

Cassandra later returned to her place of birth in Oregon after a series of disturbing dreams. She was alone in life, with no one to care for her. (Makes me wonder what happened to Charlotte.) The visions returned to her suddenly: visions of Spider-Man and numerous trials. She saw the first Spider-Woman (Jessica Drew), the Rhino, the Lizard, Vermin and Electro. "A Gauntlet...Sweet mercy...someone...someone is unraveling the web. They...". Madame was stopped before the vision ended, attacked by Ana Kravinoff and her mother. They had their eyes now. The hunt could begin.

Later, Madame Web is seen locked in a metal room, unaware where she is or how long she has been there. Ana arrives and feeds her a live spider which somehow drugs Cassandra and makes her tell Ana what Spider-Man is doing. The psychic was forced to mentally "push" various enemies of Spider-Man into attacking him, leaving him physically, mentally and spiritually exhausted by the time the Kravens were ready.

Ana and Sasha also used her to learn about the origins of Spider-Man's powers. The story of the "spider totem" was revealed to them, as well as the relationship he had with Ezekiel Sims, his mentor. She was forced to provide details about Sims, which helped the Chameleon assume the guise of Peter's dead mentor, fooling him into a trap. Little did the Kravinoffs know, but the man in the costume wasn't Peter, but Kaine.

The blood of "Spider-Man" was used to resurrect Sergei Kravinoff, reuniting the Kraven family. Sergei's heightened senses realized that the dead man in the costume was not the real Spider-Man, which sent Sasha into a rage. She took out her anger on Cassandra, slitting her throat. Before Madame Web passed away, she turned her power (and blindness) over to Julia Carpenter, the second Spider-Woman, who had also been kidnapped by the Kravens.