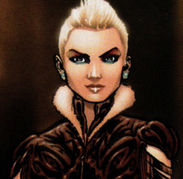 Anastasia Tatiana Kravinoff was a daddy's girl. Psychotically so. Only twelve years old, her father, Sergei Kravinoff, died when she was a young girl. Her mother, Sasha Kravinoff, held a grudge against Spider-Man and passed her hatred onto Ana.

Just as her brother, Vladimir Kravinoff, was trained at a young age to be a hunter, by age twelve Ana was trained with various firearms and in the martial art of Krav Maga. She had also been exposed to her father's strength and sense heightening jungle potions. Spider-Man was Ana's obsession, but so was her desire to regain the valuables that were lost when the aristocratic family was forced to flee Russia during the 1917 Revolution. This led to a man named Vasili Holpkin Sidorov using the Black Cat to steal back the family heirlooms from collectors. Vasili was the nephew of Ana's French tutor, and had an unhealthy attraction to her.

Ana is a teenager and somewhat reckless, like her father. She went after Spider-Man alone, kidnapping Peter's roommate Vin Gonzalez, believing him to be the wall crawler. She had followed Spider-Man to the apartment and found the costume inside. The reason why she thought Vin was Spider-Man and not Peter is unclear. She took him to the sewers to fight him, only to be interrupted by her father's last successful hunting target: Vermin.

The man-rat escaped, and ran into Peter, who had borrowed Daredevil's costume, as Ana had taken the Spider duds with her. Peter learned from the creature that his room mate was being hunted in the sewers and quickly went after him. Naturally, Peter arrived just in time to keep Ana from mounting Vin's head on her wall. The two of them kept Ana busy until Vermin returned. They left the two of them to get Vin to a hospital. Later, a bitterly disappointed and humbled Ana returned to the family mansion with a tied up Vermin.

The young hunter stayed to the shadows for months, only to re-emerge after her mother gave her permission to begin the "Grim Hunt." She kidnapped Mattie Franklin (while Deadpool distracted Spider-Man) in order to use her as a sacrifice in the resurrection of her father and brother. She watched with fascination as the Lizard tore apart Billy Connors. She and Sasha kidnapped Madame Web and used her to foresee what Spider-Man was doing and how he would react to their attacks. Ana and her half brother, Alyosha Kravinoff, joined to hunt the spider-clone, Kaine, when he returned to New York. They beat the imperfect clone mercilessly, forcing him to turn to Peter for help. It was from his deranged copy that Spider-Man learned "they're hunting Spiders."

Spider-Man found Ana and Alyosha in mid battle against the second Spider-Woman, Julia Carpenter. They escaped, only to be tricked into going to the Kravinoff estate in upstate New York by the Chameleon, disguised as Ezekiel Sims. On the way, they found the young superhero, Arana, under attack from the monstrously reborn Vladimir. Kaine also showed up, and took Peter's place as Spider-Man. He knocked his "brother" out, and took the costume. His "sixth sense" has shown him that Spider-Man was going to die tonight, and he decided to do the honorable thing for the first time in his life. As he had seen, he was brutally beaten by the Kravens and sacrificed to bring Sergei Kravinoff back to life.

Ana showed to be the most fanatical of the Kravens, gleefully telling Spider-Man that he would die by dawn. Even Alyosha told her that she talked too much. She was also sensitive enough to see that her reborn father wasn't happy to be back. Her disappointment was brief, as a very angry Spider-Man soon arrived for all of the Kravens. "Haven't you been paying attention, Aly? He isn't a man, anymore. He's the Spyder. He's father's greatest prey...and now he's hunting us." She quickly realized she was outmatched. (Amazing Spider-Man #637)

She did defend her mother against Spider-Man's rage, but was busy with Arana when Spider-Man beat her father. Sergei fled with his family to the Savage Land, where he killed Sasha and Vladimir. Ever loyal to her father, Ana decided to prove her bravery and devotion by killing Alyosha, who decided to leave them after the murder of his half brother and step mother.

They didn't stay in the Savage Land for long. Sergei and Ana later showed up in NYC to kill her admirer, Vasili Sidorov. Later, Ana and her father are seen practicing their hunting skills at their Upstate New York mansion, where Sergei tells her that Spider-Girl will be her target. Ana wants to kill Spider-Man and Kraven tells her that he would destroy her. Ana begins stalking Anya, getting information from a burglar she captured and finding a bola that Spider-Girl had used on a bank robber. Anya realized that she was being hunted when she saw Ana on a video taken of a fight between Spider-Girl and Speedball. Ana confronted Spider-Girl on a rooftop, unaware that her prey had been waiting for her.

She played the part of the weakling, letting Spider-Girl take the advantage, while gauging Anya's strengths. The battle went across the city, making a quick stop at the Baxter Building, where Ana was briefly distracted by the building's defenses. She was defeated by Spider-Girl after she was tied to a truck on the expressway, dragging her down the street. She was soon unconscious and under arrest. At the same time, her defeat was captured on film by the Hobgoblin (Phil Urich). (Spider-Girl (vol. 2) #6)

"A Mighty Hunter Before the Lord"

After escaping prison, Anastasia tracked Kaine Parker, now acting as the new Scarlet Spider, to Houston, Texas. She attacked him at a concert, cutting him with a drug covered knife, then started a panic by throwing a Molotov cocktail into the crowd. Kaine noticed she seemed less focused and more deranged as she ranted that Kraven the Hunter would soon be coming for him. Kaine saved her from a burning piece of the ceiling. (Scarlet Spider #6)

Ana next showed up in Houston with her father at a rodeo, watching Kaine and his friends. (Scarlet Spider #16)

While her father pursued Kaine dressed as the first Scarlet Spider, Ana kidnapped Kaine's friends, Aracely, Dr. Leland and his partner Wally Layton. (Scarlet Spider #21) After the Scarlet Spider woke up in a grave dug at the Houston Zoo, he dealt with the escaped big cats and was soon attacked by Ana. She led him across the zoo, taunting him that his friends were dead. She had killed a guard and mortally wounded another, using him as bait for a trap. Kaine escaped from the net and nearly killed the teenager, until he decided that he wasn't a killer. She led him to where her father was holding Leland, Layton, Aracely and Annabelle. (Scarlet Spider #22) She held back as Kaine and her father fought, but when the Scarlet Spider still refused to take Kraven's life, he ordered his daughter to kill one of the hostages. Kraven kept the Spider busy while Ana gutted Dr. Leland because he was her favorite. Kraven then ordered her to kill all of the hostages and Scarlet Spider killed him by hitting him in the chest, stopping his heart. In a rage, Ana attacked Kaine but was slashed across her face by him. After Kaine tended to Dr. Leland, he performed CPR on Kraven, who then escaped with Ana. (Scarlet Spider #23)

After learning of her father's plan to clone himself and pick the best of the clones as his successor, Ana left him and disavowed being a Kravinoff. (Amazing Spider-Man (vol. 5) #16)

After disavowing her family, Ana joined the all female Sinister Six (Scorpia, Doctor Octopus (Carolyn Trainer), Beetle (Janice Lincoln), White Rabbit, Electro (Francine Frye), Trapster). As they argued if they needed her or not, the group was attacked by the demonic entity called Kindred. The creature placed centipedes into their ears and told them that the insects were hungry and that only he could stop their eating. He wanted them to kill Spider-Man and punish him for his sins. Soon, this Sinister Syndicate (there was another all male Sinister Syndicate involved) was attacking Spider-Man in a cemetery. He was already badly outnumbered by another group of criminals but Ana managed to stick her knife into his back. (Sinister War #2)