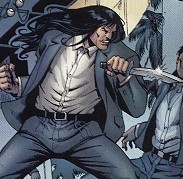 ”Son of the Hunter”

The second son of Sergei Kravinoff grew up in Africa, and never had the love of his father like his brother Vladimir Kravinoff did. Sergei set him aside, because he was a bastard son, and though he gave him the best education, he rarely visited and remained forever distant. After Sergei committed suicide, Alyosha became obsessed with learning more about his father, and kept honing his hunting skills in a way to relate to his dead parent. Meanwhile, Vladimir also got killed while hunting Spider-Man, executed by Kaine.

A few months later, Alyosha returned to New York, dressed in his father's guise, and began following his uncle, Dmitri Smerdyakov, the Chameleon. Dmitri was on the verge of insanity, and he kept believing he was talking to a ghost. He later realized, too late, that the Kraven in front of him was very real, and was shot. (We see him in the hospital in a panel of Spectacular Spider-Man #250). He survived, but his next appearance was far, far away.

Alyosha, still impersonating Sergei, had his animals (a lion and a gorilla) attack Spider-Man and then flee, allowing Spidey to get a glimpse of him. Later he captured some criminals, and identified himself as Kraven the Hunter to the news crew at the scene. Upon seeing the news, Peter started looking for him. Meanwhile, Alyosha took advantage of Calypso, who mistook him for his father. He then cast her out of his mansion when he was done with her. Humiliated, she promised to return.

When Spidey found Alyosha, he was attacked by the Hunter riding an elephant jumping over New York's rooftops. How did it get there, you ask? How could it do that? Never mind. Spidey couldn't figure it out either. They fought, Spidey was shot in the arm and KO'd by the elephant. He woke up with his injuries treated, and a surprisingly friendly Hunter in front of him. Alyosha tells him he never really knew his father, he never knew civilization, and that he grew like a beast. He told Spider-Man that he attacked him to feel close to his father. He wanted to experience what his father had experienced. Then he begs Spidey to talk about Sergei. They have a chat. The chat is interrupted by an explosion - Calypso was back.

All of Kraven's animals (except for the lion) died in the explosion. Alyosha was enraged. Calypso commanded a squad of savages who served the original Kraven who sought revenge against Spidey for Kraven's death. She also blamed Alyosha for his deception and for "conspiring" with his father's enemy. After their fight, she managed to enchant Spidey and Alyosha to turn on each other, but Spidey broke the enchantment. Alyosha saves Calypso from his lion, Gulyadkin,(named after a character in the Russian novel The Brothers Karamazov. All of the Kraven related characters are named after some character in the novel.) and makes a truce with her. He asks her forgiveness, saying he was jealous of her. She agrees to tell him about Kraven. Spider-Man leaves, assured that the Kravinoff obsession with him was finally over that night. Later, at dawn, the floor of the Kravinoff Estate is painted red, with the blood of Calypso's servants. In his bedroom, Calypso lay dead at Alyosha's and Gulyadkin's feet. For he is Kraven the Hunter, "and the killing has just begun".

After that, J.M. DeMatteis left the Spider-Titles, never following up on Alyosha. He had a couple of appearances on Fantastic 4 and Black Panther, where I'm told the writers used him as a copy of Sergei Kravinoff, instead of the wild and insane beast DeMatteis had created.

”Another Return of the Sinister Six”

Then Howard Mackie used him in the same way to reform the Sinister Six, where you'd look at him and wonder if it was really him or his father. Alyosha was recruited by the Sandman to kill Doc Ock and Senator Ward, in another of Mackie's poorly resolved storylines. Then he was fleeing from Venom, who regretted having joined the Sinister Six and was trying to kill his former team-mates. (Amazing Spider-Man (vol. 2) #12)

Later, Ron Zimmerman decided to use Alyosha as "Al Kraven", a rich playboy with a pet wolf (Nickel) and a dumb aspiring actress girlfriend (Timber). For someone who never saw civilization, Alyosha sure learned fast. Anyway, in the awful mini-series Get Kraven (and it's prelude) Alyosha is attacked by the Chameleon (back without explanation, having attempted suicide himself), who became convinced he was Kraven. Then he goes to Hollywood, tries to make a movie, gives Timber the main role. Dozens of irrelevant characters show up, another son of Sergei Kravinoff show up and gets killed by the Chameleon-as-Kraven. Alyosha and the Vulture become a vigilante duo with Spider-Man's blessing. Really. Ok, just pretend this never happened, ok? Pretend it was a lousy What if...?. In a couple of years, this story can be completely forgotten. Hopefully.

Poor Alyosha. I liked him when he started out. Really, I did. Now he's been a part of lots of crap stories. He was taken to Battleworld with Gravity and Venom III to be a part of the Beyonder's experiments on human combatants.

After he returned to earth, he started hunting super-criminal prey. He captured the Rhino from the Punisher and put him in a "zoo," along with Vulture, Kangaroo (Hibbs), Swarm, Tiger Shark, Frog Man and many others. Rhino cant believe it, but he actually hopes that he gets found by the Punisher.

Frank Castle does eventually find Alyosha and the others, but not until after Al executes one of his prisoners (a horse named Aragon) in front of them. All of the prisoners are wearing explosive bands around their necks. Rhino asks Toomes why, being the engineering whiz that he is, he hasn't found a way to short out the explosive devices. The answer is simple: Kraven broke Toomes's hands. Several times.

Punisher catches up to where Kraven is hiding, and finds him right in the middle of a drug crazed battle with the Rhino. Kraven has been drugging his prisoners and battling them. Castle hesitates while deciding which one to shoot and ends up captured. Al ties him up in a slowly filling chamber of water. Frank escapes and makes his way through the ship full of drug crazed super criminals to Kraven. Alyosha escapes and seemingly the only causality of the incident was the Kangaroo.

Alyosha finally got his life's wish when his father returned from the dead. While there was mistrust between Alyosha and Sasha Kravinoff (Al was the result of an affair Sergei had with a mutant woman), he was allowed to take place in the black magic ceremony. He also acted as a guardian for Ana Kravinoff, Sergei's young daughter and kept her out of trouble. (She wanted a closer look as the Lizard killed Curt Connor's son, Billy.)

Alyosha quickly learned that he didn't care much for his aloof father, who was now even more unstable after his return to life. Al was quickly taken down by Spider-Man and didn't play a part in the final battle with the reborn Sergei. He did escape to the Savage Land with his family, which didn't turn out well. After Kraven the Hunter killed his wife and resurrected son, Vladimir, Al wanted nothing more to do with any of them. Sergei sent Ana after him. The one that survived would be his true child. It wasn't Alyosha. (Amazing Spider-Man #637)