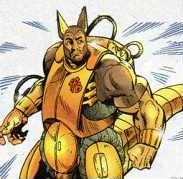 ”The Legion of Losers!”

Inspired by the original Kangaroo (Oliver), Brian Hibbs decided to follow his idol into a life of crime. He made his debut by bounding through the snowy streets of New York one day, screaming to pedestrians that "The Kangaroo is back--an' he's hoppin'--mad?" He was then punched in the face by Spider-Man and knocked out. Spidey left him webbed to a light pole and left, amazed that anyone would want to take Frank Oliver's place. (Spectacular Spider-Man #242)

Hibbs actually managed to escape from the police on his way to his arraignment, just as the original Kangaroo had done. Using his trust fund to buy "Kangaroo Battle Armor," Brian set out to begin his criminal career. He again encountered Spider-Man moments after leaving his hideout and his armor was destroyed when he fired his chest cannon. He immediately wanted a refund from the "Sharper Villain Catalog." Spidey thanked him for his help in defeating himself and webbed him to another light pole. As he mumbled thought of revenge to himself, he was approached by the Grizzly, who was putting a gang together. (Spectacular Spider-Man #244)

At the Grizzly's apartment, Hibbs was complaining that the warranty on his battle armor wouldn't be honored. Grizzly tried to give him a pep talk, when Hibbs called him a "has been wrestler" and a "loser." Martin Blank (the Gibbon) then arrived, and told him to never call Grizzly a loser again and threatened to "boot you back to Australia." Hibbs said he actually isn't Australian but gave up trying to explain to the Gibbon. Hibbs was glad that at least Grizzly hadn't tried to recruit the Spot, when the Spot arrived. (Spectacular Spider-Man #245)

The first act of the "Spider-Man Revenge Squad" was to appear in the vault of the Midtown Savings Bank via one of the Spot's portals. Spot and Kangaroo were basically interested in money, while Grizzly and Gibbon impatiently waited to attack Spider-Man. Disgusted, Grizzly and Gibbon left...out of the bank vault, setting off the alarm. Kangaroo and Spot left via the portal. Mistakenly believing that they could take on the police, Grizzly and Gibbon were chased to a nearby basement. Spider-Man found them there and accused them of the bank robbery. Spot and Kangaroo then appeared through a portal, telling Spidey that they were the one's with the money. Spidey was seemingly beaten by the Gibbon and Kangaroo, but was merely playing possum until they took him back to their hideout (Grizzly's apartment).

At the "hideout," Gibbon and Grizzly were considering giving the money back. Kangaroo flew into a rage and said that he wanted to be a super-villain more than anything (even more than being an interior decorator) and he wasn't going to let anyone ruin it for him. When Gibbon continued to protest, Hibbs shot him with a missile from his armor. Grizzly knocked him into a wall, which he bounced back from, but he fell into one of the Spot's portals. Grizzly and Gibbon managed to defeat the Spot and Spidey revealed that he had been conscious the whole time. He had been listening in on the conversation and decided to let them go, as they had wanted to give the money back. Spot and Hibbs, however, were taken to the police. (Spectacular Spider-Man #246)

As he had been such a spectacular failure as a criminal, Hibbs tried out as a professional baseball player. Hibbs changed his name to Billy Bob Jenks but was still found out to be a superhuman. (At some point he had undergone experiments to gain actual super human abilities. He had gained height and strength but lost what intelligence that he had.) The baseball commissioner, upon hearing that Hibbs had been playing professionally, decided that superhumans were not allowed to join major leagues. (Nova vol. 3 #7)

Hibbs found himself in the prison called The Cage, which had a force field that weakened superpowers. There he studied combat with Batroc the Leaper, another super criminal that used jump attacks. (Wolverine vol 2, #164 & #165) The mutation progressed further, until his mind deteriorated to the point that he believed he actually was Frank Oliver and started speaking in a nearly impossible to understand Australian accent.

Still imprisoned in The Cage, Kangaroo picked a fight with the newly incarcerated Tombstone. The gangster was unimpressed with Hibbs and kicked him in the crotch. They fought but Tombstone suffered a heart attack (he had suffered another one during a bank robbery, causing him to be captured by the FBI) and was beaten by Hibbs. Tombstone then formed a gang of imprisoned super criminals (Big Ben, Rocket Racer, the Spot, and Hypno-Hustler) to kill Hibbs. They found him in the prison library, re-learning how to read and held him down as Tombstone was about to stab him with a pair of scissors when the prison guards rushed in a took Tombstone to solitary confinement. (Spider-Man's Tangled Web #16)

Hibbs beat Big Ben, the Spot, HH and Rocket Racer savagely but his revenge was short lived. As Tombstone was about to undergo emergency heart surgery, he leaked a rumor that Hibbs could get to him while he was vulnerable by crawling through the ventilation ducts to the operating room. He also leaked word to a group of amorous inmates that Hibbs could be found in the ducts. Naturally, Kangaroo got himself stuck in the ventilation system and The Cruisers did what they wanted with him. (Spider-Man's Tangled Web #17)

By this point, he was back to his original form as Brian Hibbs. This was unfortunate for him. While he was never bright, at least with the mutation he had super strength, which would have been useful for when he was captured by Kraven the Hunter (Alyosha Kravinoff). Kraven was kidnapping animal themed super criminals and holding them prisoner on an abandoned ship, hunting them for sport. (These collected criminals included Bushmaster, Rhino, Tiger Shark, Man-Bull, Mongoose, Grizzly, Swarm, Dragon Man, Frog-Man, Aragorn, Vulture and Mandrill.) Kraven kept them under control by putting electrified collars around their necks and fed them rarely. They escaped when the Punisher fought Kraven, despite Alyosha using toxins to make the captives violent and attack the gun toting vigilante. (Punisher War Journal vol. 2, #13-#15)

”Ends of the Earth”

Brian Hibbs met his end as Doctor Octopus began his final master plan. Ock was dying and planned to leave the earth with one final scheme: accelerate the rate of global warming with a network of satellites in orbit. While Octopus claimed that the satellites could also reverse global climate change, Spider-Man was suspicious of his old enemy and joined the Avengers to destroy the threat. Octavius had bases located around the world that were building his satellites, one of which was in Australia. Hibbs had since immigrated to the Land Down Under and accepted the challenge to attack Ock's base. The base was located in the Outback and he got there in his "Kangaroo-Mobile" (a pickup truck.) Drinking a beer, Hibbs was thinking about how good it would sound to be considered a hero but he was killed by one of Ock's mercenaries: Lady Deathstrike. (Amazing Spider-Man: Ends of the Earth #1)

After Mr. Negative forced Tombstone and Hammerhead out of their territories, various lower ranked criminals scrambled to take advantage of the chaos. Kangaroo teamed with Shocker to rob an armored car. (Amazing Spider-Man #19.1)

Kangaroo was kidnapped by the mercenaries Taskmaster and Black Ant on the orders of Arcade, who was working for Kraven the Hunter (Sergei Kravinoff.) Hobbs was held captive in Central Park and was forced to stay in the park by a force field surrounding it. Many other animal themed criminals were also forced to take part as prey for rich donors to Arcade. Nearly indestructible robots, piloted by the donors, pursued the captives with everything from bows and arrows to laser cannons. Spider-Man was also a captive in the park but was hunted by the robots and criminals both. (Amazing Spider-Man (vol. 5) #17) All of the surviving criminals escaped the park only long enough to be apprehended by the Fantastic Four, the Avengers, and Doctor Strange. (Amazing Spider-Man (vol. 5) #23)

(Marvel’s writers must love this guy. His whole character is based on the fact that he’s incompetent and continually out of his league. I don’t know how many times he has gotten in the way of the wrong person only to show up alive in another story. At first I hated the blatant carelessness for continuity but at this point I accept his inability to die as part of his character. So even if he is shown floating face down in a sinking ship, being stabbed by a superhuman assassin, or being hunted like an animal while others die all around him, I know that he’ll be fine.)