The Legion of Losers 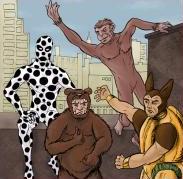 (Individual personal data is featured in their individual profiles)

The Legion was composed by Kangaroo II, Grizzly, The Gibbon and Spot.

It all started with Maxwell Markham (Grizzly) wanting revenge against Spider- Man, and Brian Hibbs (the second Kangaroo) being defeated by Spider-Man in two consecutive weeks. First, Hibbs, who worshiped the original Kangaroo, Frank Oliver, stumbled upon Spidey on his first day of crime and and got easily knocked out. Escaping on his way to court, Hibbs ordered a powerful battle armor from the Super-Villain's Catalogue and went on his second crime spree. He met Spidey again, and his battle armor self- destructed... Spidey left him hanging for the cops, but the Grizzly came to him with an offer, and cut him down.

At Markham's place, the Hibbs cynnically points out that the Grizzly's track record isn't any better than his. Markham replies that he killed Spider-Man once, but he got better... Hibbs heads for the door, when Markham suggests they should form a team. Hibbs isn't very interested, and the sudden arrivals of Martin Blank (The Gibbon) and Jonathan Ohm (The Spot) don't make it better for him.

Regardless, a team is born, and the first thing that the Spider-Man Revenge Squad (which everyone else came to know as the Legion of Losers) does is... to rob a bank. Dissention soon spreads, as the Grizzly and Gibbon were disenchanted - they were in it to get back at Spider-Man, not to to rob banks. The Spot and Kangaroo think otherwise, and they flee through one of Spot's portals when the other two decide to walk away through the door... triggering the burglar alarm. Being chased by the cops, which Grizzly refuses to stand up to, because he has nothing against them - they are just doing their job - the two G's managed to escape, but they met with Spidey. A "fight" ensues, with the highlights being Spidey trying to convince them to return the money and the Grizzly sticking his hand through a wall... But reinforcements soon arrived, in the form of the less moral half of the Legion, and Gibbon and the Kangaroo managed to KO Spidey. The Spot suggested that they return to Grizzly's appartment... after they pull Grizzly's arm off the wall.

At the Grizzly's, the Legion debates. Kangaroo is checking the Super-Villain's Catalogue and picking his future purchases, the Spot is wondering what's the best way to kill Spider-Man, and the Gibbon is asking if they weren't just gonna hit him. That's when dissent starts again. The Grizzly says that Spidey actually tried to help them, and that they'd do better to do like he said, just return the money and forget the revenge. The Kangaroo takes offense at the suggestion, but the Gibbon sides with Grizzly. The Grizzly ducks a charge from the Kangaroo and he falls through one of Spot's portals, KO'ing himself in the process. Then the G's KO Spot easily. When they turn to release Spidey, they realize that Spidey was never KO, just faking to see how everything would play out. Spidey took the Spot and Kangaroo, and thanked the G's and told them to stay out of trouble. They decided to form an heroic duo, The Gargantuous Grizzly and Gibbon, the Boy Monkey. They still patrol New York today, making everyone safer. Thier arch enemy is the White Rabbit and her gang. The nefarious Rabbit at one point kidnapped Grizzly and the Boy Monkey and threatened to feed them to genetically engineered killer bunnies unless the City of New York paid a ransom. The mayor offered her $1.50.