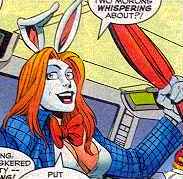 The White Rabbit is a clear example of a nutcase. As a child, Lorina Dodson belonged to a rich family, who wanted to give her an upright education. She was mostly secluded and "protected", in order to become a "proper lady". Having nowhere to turn, she found her refuge in books, until she read Lewis Carroll's Alice in Wonderland. That book was more than a simple refuge for a troubled mind; in her own words, it saved her soul.

She grew up into a futile and melancolic 25 year old woman married to an 82 year old multi-billionare geezer. She could have anything money can buy, but she longed for the thrill of danger, mayhem, and adventure, which her husband couldn't give her. She eventually got rid of him, though his death was assumed to be natural (she assures he died happy... I wonder) and then used his fortune to become the White Rabbit, based on the character from the book.

She started her villainous career by robbing several fast-food restaurants. Why fast-food? As I said, "the White Rabbit is a clear example of a nutcase". Her biggest problem was that when she tried to rob Kwikkee Burger, Eugene Patilio was in the restaurant. You don't know who Eugene is? He's none other than the Fabulous Frog-Man! While he dodges the bullets from the White Rabbit Gang, the White Rabbit herself abandons her men, leaving them to handle Frog-Man. Of course, Frog-Man eventually handles himself (check his profile if you don't understand why), and he only survives because Spider-Man intervenes. After that, she goes to her next target with a renewed Gang: A book fair. On her way, she's spotted by Spidey and Frog-Man, and after a funny battle, her jet-boots fail and she crashes to her first defeat.

A few years later, she returns with a different plan: She wants to execute revenge on Frog-Man. With that, she contacts Speed Demon, Yellow Claw and the Walrus, the other guys who were (sort of) defeated by Frog-Man. The first two scoff at her proposal, only the dumb-as-a-rock Walrus agrees. They start spreading chaos and mayhem in Brooklyn (surprisingly, in front of Kwikkee Burger) to attract Frog-Man, but they attract one frog too many, because Eugene's dad, the original Leapfrog, also shows up and he controls the suit much better than his son. Of course, Spidey also appears, and once again Frog- Man scores a clumsy victory, by falling on the Rabbit's back when jumping out of control.

In her third and final storyline to date, she and her gang are robbing a bank, when the Gargantuan Grizzly and his partner, Gibbon, the Boy Monkey, show up to stop her. They're captured, and three issues later she attempts to ransom the duo demanding 1 billion dollars for their lives, or she'd feed them to her genetically altered killer bunnies (Monthy Python, anyone?)! The Mayor thinks that 1 billion is too much, and makes a counter offer: $2.50! She rejects and takes the Flying Hare to bomb the city. She raises the ransom request to 5 billion and returns to her hideout, while a stealthy Bombastic Bag-Man (Peter with a bag on his head. Hey, it's the middle of Identity Crisis, and he had none of the other costumes with him!) climbs aboard the Hare.

When the Hare arrives back at the hideout, the White Rabbit drops Grizzly and Gibbon into the bunnies' pit, and the Bag-Man takes out the White Rabbit Gang. When he faces the Mad Hatter and the Dormouse, the White Rabbit's sidekicks, they say they're only hired actors, because not a single super-villain (!!!) wanted to work with the Rabbit. She shows up with a giant Rabbit-Robot and blasts Bag-Man away. Of course, Peter's just pretending, because he saw Grizzly and Gibbon leaving the pit and wanted to give them the victory. It seems that the Gibbon's natural affinity with animals convinced the killer bunnies to chew their chains. The Grizzly, afraid to be called sexist if he didn't give the Rabbit equal treatment, renders her K.O. with a nice punch.

W.R. next worked with Arcade and actually developed a romantic attraction to the little guy. The duo went after the Black Cat and Wolverine. Felicia and Logan were tracking someone claiming to be Kraven the Hunter, who was engaging in a game of hunting human beings. Naturally Wolvie and Cat beat the duo but White Rabbit ended up in the Savage Land and became queen a tribe of warriors. (Claws #1-#3) Lorina later teamed with the Hood during Norman Osborn's Dark Reign and took on Mister Negative's gang. (Dark Reign: Mister Negative #1-#3)

We next see the White Rabbit in Los Angeles, where she is working as a drug dealer to the rich and famous. One of her clients is Mary Jane's boyfriend, Bobby Carr. (Peter and MJ ended their relationship via the demon Mephisto in the One More Day story.) Carr is also an actor and is using Mutant Growth Hormone to bulk up for a movie role. The Rabbit turned on her client when the U.S. Department of Justice wanted him to inform them who his dealer is.

Rabbit and her gang attacked Carr and MJ at a trendy L.A. club, gassing the party goers. Mary Jane saved the day when she disabled the "Alice" gang member and stole her costume, allowing her to get close to Bobby. As they ran, Mary Jane took out the White Rabbit with a "Cream Machine" at the club. As the police took the White Rabbit away, Bobby Carr complained that now she would tell them all about his drug use. His shallowness made MJ walk away from him and take a TV job, which took her back to New York. (Amazing Spider-Man #605)

Rabbit was later hired as a guard (along with Chance and Scorcher) to protect the hideout of the Queen and Miles Warren. They were tougher than usual, as the Jackal and Queen had given them spider powers. Peter and Carlie Cooper over powered the trio, with kung fu that Peter learned from Shang Chi. (Amazing Spider-Man #669)

She escaped soon after and was apprehended without a fight by the Superior Spider-Man. The new Spider-Man's methods were quite a bit more brutal than the old one's and he congratulated her on her wise choice of surrender. (Superior Spider-Man #4)

Soon, Peter was restored to the role of Spider-Man and his typical Parker luck stayed true to form. The White Rabbit had formed a animal themed gang called "The Menagerie" and worked with Panda-Mania, Gypsy Moth and the Hippo. As Spidey swung in, Gypsy Moth (now calling herself "Skein") used her cloth controlling powers to unravel his costume. He knocked her out before the mask fell apart but he stood there buck naked. He spun a web costume for himself as TV cameras rolled. The Menagerie was quickly captured. (Amazing Spider-Man vol 3 #1)

Spidey briefly crossed paths with the "Menagerie" after a diamond heist. He quickly defeated them and resumed looking for the German tourists whose cell phone he was trying to return. (Amazing Spider-Man Annual vol 3 #1)

After Tombstone and Hammerhead were taken to prison, the power structure of the New York gangs was in flux. Many criminals took advantage of the newly vulnerable territory and Rabbit was one of them. However, this brought her into conflict with the Spot, who also wanted that territory. (Amazing Spider-Man #19.1)