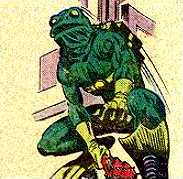 Vinnie was an inventor whose inventions were useless. When he devised some electrically powered leaping coils, which could make him leap as high as 6 stories, he saw it as a chance to make some money with his inventions, which he never could otherwise. He created the Leapfog costume, and embarked on a criminal career.

His plans were foiled by DareDevil twice, Spidey and Iron Man, who sent him to jail. In the meantime, as always, it was his wife's paycheck that supported the house. After serving his time, he returned to his family and gave up on his evil ways. However when Rose, his wife, died of cancer everything changed. Eugene, his son, decided to clear his father's name by wearing one of his suits and calling himself Frog-Man. He found Spider-Man and the Human Torch having minor trouble with Speed Demon and intervened, defeating him. Vinnie was proud, but didn't want his son risking his life out there.

Feeling guilty that Eugene was risking his life to try and get some money, Vinnie devised a plan. After Frog-Man dismantled the new villain White Rabbit's gang (don't think it was that cool, he didn't do it on purpose), Vinnie went to her and offered his work. She agreed, not knowing that he was with the cops, and recorded everything she said (the gal' robs lots of stores, and the cops wanted a recorded confession...). When she was down during a fight with Spidey and Frog-Man, he was eligible for a reward, which has been supporting him and his family ever since...

Think about it for a minute: Spider-Man is facing real menaces from day one, and he's always broke. Vinnie records a confession from a ridiculous woman dressed as a bunny, and gets his financial problems solved for the rest of his life. Life is tough for Spider-Man...

His final appearance was in Spectacular Spider-Man #185, where the White Rabbit returned to get even with Frog-Man, and teamed-up with the Walrus, another loser who was "defeated" by Eugene. In a hillar... epic, I meant epic, struggle (see the other profiles and the review for more details, or better yet, read the book), the Walrus is beaten by Leap-Frog (Vinnie), who's saved from the White Rabbit by Frog-Man (Eugene), and then they're both saved from the Walrus (again) by Spidey. In the end, it seems that finally Vinnie gives his blessing to Eugene about being Frog-Man.

That last story was the first (and until now, the last) where Vinnie used an exo-skeleton in his suit, to increase physical parameters.

Note, Vincent should be differentiated from Leapfrog (Lange) - father of Timmy, abusive, electrocuted by Timmy to stop him from killing daredevil, in Daredevil (Vol. 2) #16 and following.