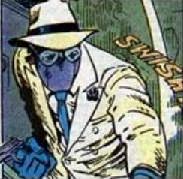 Richard Fisk is the son of Wilson Fisk, the Kingpin. Raised without knowledge of his father's criminal activities, Richard was shocked to discover how his family's fortune was made. Vowing to bring his father to justice, Richard became the crime-lord known as the Schemer. The Schemer targeted and directly attacked the Kingpin's minions, leading to a confrontation with the Kingpin himself. Faced with his father, Richard unmasked. His son's betrayal briefly unhinged the Kingpin's mind. Remorseful, Richard joined H.Y.D.R.A. to try and regain his father's respect. When H.Y.D.R.A. was brought down by Captain America, Richard was nearly killed. Only a bizarre exchange of life forces with Spider-Man saved him.

For many years, Richard stayed out of sight. He never got over his initial revulsion at the Kingpin's career, and eventually returned as the Rose, a crime-lord under the Kingpin's control. In reality, Richard was trying to undermine the organization from within with the help of his friends Alfredo Morelli and Ned Leeds. Richard's plans fell into disarray when a gang war started. During one shoot-out Richard killed a police officer, an act that represented a point of no return for him. Then, Ned Leeds was murdered while on assignment for the Daily Bugle in Berlin. Disillusioned, Richard openly joined his father's organization.

Richard could not long countenance the Kingpin's methods, however. He hatched an elaborate plan with Alfredo to make the Kingpin think he was ready to follow in the family business. Since Alfredo had actual combat experience, he was tapped to become the inside man. Undergoing plastic surgery to look like Richard, Alfredo began to climb the ladder of power within the organization. The Rose's second incarnation was Sergeant Blume, of the NYPD, who was with Alfredo and Richard, because the Kingpin was responsible for the death of his brother, also a cop. When the Kingpin was brought down by Daredevil and H.Y.D.R.A, Alfredo refused to let go of the ruse and took over as the new Kingpin. After he killed Blume, Richard adopted yet another identity, that of Blood Rose, and began a Punisher-esque style of open warfare against the gangs. In Web of Spider-Man #100, Alfredo and Blood Rose nearly finished each other. Richard entered the Witness Protection Program after that.

Rose III, the fourth incarnation of the villain, was assumed to be Richard Fisk, but in fact had no connection to him. He was Jacob Conover, Peter's colleague at the Bugle.

With his father's return to power, Richard surrendered and gave up trying to destroy him, realizing he had no chance to achieve that goal. He returned to his father's organization a defeated man. During a round of drinks with an ambitious Kingpin operative named Silke, Richard realized Silke might have what it takes defeat the Kingpin. He helped Silke's move for power, which ended up with Kingpin (recently blinded), being stabbed almost to death. Returning from Europe, Vanessa Fisk led a swift counter-strike, which quelled the rebellious insurgency. Having triumphed, Vanessa Fisk retailed the Kingpin's territory and sold his operations to minor crime lords, leaving the States soon after with her injured husband, taking him back to Europe to recuperate, but not before she settled things with her son. A moved Richard told his mother "You don't understand, I saved us, don't you see?" Apparently she didn't, as she ruthlessly shot her son dead.

Silke, believing the Kingpin was dead (he was saved almost miraculously by his and Vanessa's doctors), turned himself in to the FBI for protection, with all his men dead, and revealed Daredevil's ID (which Richard had revealed to him) in exchange for protection. The feds decided not to pursue the matter, but one of them secretly sold the info to a tabloid, causing Matt Murdock a problem he is still facing today with vehement denial--public exposure. Silke is currently in police custody, but as we all know, Kingpin's vengeance is swift and deadly. His days are most likely numbered.

After his return, Fisk recruited Digger, an undead Hulk-like monster, to act as his muscle. He and Digger met with Tombstone, Hammerhead, Mister Negative, and Crime Master to discuss a purchase. Tombstone was unimpressed, as the Rose had no territory and thus, no power. They eventually agreed to have their men meet in Harlem, despite Fisk’s displeasure that the exchange would happen in Tombstone’s territory. Afterward, Fisk had Digger blow up Tombstone’s penthouse. (Amazing Spider-Man (vol. 6) #1)