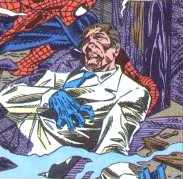 Sergeant Blume played the role of The Rose during the Name Of The Rose story. He and Richard Fisk (Schemer, Rose, Blood Rose) apparently had a plan to overthrow The Kingpin, each for their own personal motives.

Richard wished to destroy the evil that his father had become. Sergeant Blume was persuing revenge for his brother Billy, a cop who turned down a bribe from The Kingpin, and paid for that insult with his life.

Sergeant Blume was supposedly on the side of the forces of good, trying to clean up the streets, but he was certainly implicated in a lot of crimes... murder, breaking and entering, criminal fraternization, attempting to procure a hitman, and a whole swag of gun offences on a major scale.