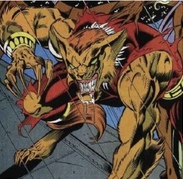 Thomas Fireheart is the result of years of genetic engineering performed by his Native American tribe. Fireheart can transform into Puma, a half-mountain-lion being with senses far more acute than that of a normal human. He is the traditional protector of his New Mexican tribe, although Fireheart himself often questions the traditional rituals that his uncle, the tribe's Shaman, espouses.

Puma first crossed the path of Spider-Man when he was hired by the Rose to "remove" the Web-Slinger. The Rose later changed his mind, so the continued existence of Spider-Man is not considered a blight on Puma's professional record. Puma sought Spidey's help when he discovered that he was destined to fight the Beyonder. Spider- Man refused, making Puma doubt himself and, eventually, fail in his quest against the Beyonder.

Puma publicly confronted Spider-Man over a story in the Daily Bugle that made it seem as if Spidey was a thief. When the story turned out to be false, Puma felt as if he had lost face and was now honor-bound to clear Spidey's name. To this end (and much to Spidey's annoyance), he purchased the Daily Bugle from J. Jonah Jameson. He began a campaign of positive promotion which was largely responsible for the public perception of Spidey as a hero.

Puma's animal side became dominant after contact with the Black Crow. He was seriously wounded in a fire fight with the New York City Police, but nursed by to health by Nocturne, who was eventually able to restore his human psyche.

Fireheart recently returned to action as the Puma after Dr Vincent Stegron used a mystical gem from the arctic to bring out the animal nature of New York City's residents. He was in the middle of a board meeting when he began his transformation into the Puma against his will (as had happened to other "animal" enities, such as Lizard,Vulture and Vermin). Only gaining control of his rage after killing a street dog, he used his superhuman senses to follow the source of the disturbance. This led him to cross paths with the Black Cat, who also had been feeling dangerously agressive, an effect of the gem.

They eventually found Stegron, who was in the process of transforming new York into a prehistoric jungle populated by dinosaurs and giant insects. As Spidey battled Stegron, Puma and Black Cat concentrated on containing the rampaging animals. After Stegron's defeat, Thomas and Felcia have begun a relationship (ironic to me, as the first time they met, they battled for Spidey's life). They became something like a team, and Fireheart stood guard as Cat persuaded a drunken Rhino that he didnt have to be a criminal.