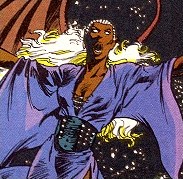 Detective Angela Cairn's life was shattered when the rat-creature known as Vermin escaped from NYU Medical Center, killing several police officers including Angela's "partner" Jackie Kessler. Trying to cover her pain and bitterness, Angela became one of the toughest cops on the force: a cigarette smoking, no-nonsense detective who would rather haul Harry Osborn off to the maximum-security Vault or wrest Vermin from the hands of Dr. Ashley Kafka than to worry about their civil rights.

Angela was particularly concerned about the Mutates, victims of Baron Helmut Zemo, their humanity warped into grotesque forms. She becomes obsessed with a series of mutilation killings that remind her of Vermin. In despair, she resorts to doing a reading of herself with her mother's "spirit cards" and discovers that her totem is the bat.

Angela gets a tip on the location of the Mutilation Killer but it is a set- up. The Killer is waiting for her in an abandoned warehouse, captures her, reveals itself to be another of Zemo's mutates, and puts Angela through the same mutation process. At first, it seems that the process kills Angela and the Mutilation Killer buries her in the East River. But Angela rises again, transformed into Nocturne, a mute batwinged creature with the power to unleash blasts of emotion.

Her first encounter is with Spider-Man, who believes she is the Mutilation Killer and that she has done away with Angela Cairn. Later, however, Spider- Man interrupts a battle between Nocturne and the Killer. Even though the Killer, a shape shifter, is presently in the form of Angela Cairn, Spider-Man realizes that Nocturne is the real Angela when Nocturne plants the truth into his mind. Together Spider-Man and Nocturne defeat the Killer, with the web- slinger convincing Angela to refrain from taking a deadly revenge and instead leaving the Killer to the authorities. Spider-Man then tries to convince Angela to seek help with Dr. Kafka but she chooses to go her own way.

A little later, Nocturne flies to her old home. Peering in the window, she finds her mother sitting in her old room, mourning her apparent death. As her mother sleeps, Nocturne implants a feeling of love and peace within her. She also takes an earring once given to her by her mother to help her remember who she was and who she's supposed to be.

Eventually, Nocturne learns to speak, though it is difficult for her. She comes upon the Puma, wounded in an alley. Puma has lost his human intellect and become feral. Nocturne absorbs his pain and heals him. The grateful Puma stays with her as a companion.

They live together in the dark corners of New York City looking for tormented souls who need healing. At a time when Spider-Man's spirit is at its lowest ebb, Nocturne tracks him down. But the sight of his old web-slinging enemy sends Puma into a rage and he attacks, accidentally slashing Nocturne's face and knocking her unconscious in the process. Puma flees the scene of the battle and Spider-Man takes the unconscious Nocturne back to Angela's old apartment. But the apartment has been re-rented in the meantime. Spider-Man realizes ruefully that life goes on.

He takes Nocturne to a rooftop and is surprised to see that her first thoughts, upon regaining consciousness, are for Puma. Together she and the web-slinger track Puma down, with Puma attacking Spider-Man once again. This time, however, Nocturne manages to get between the combatants and creates an emotional conduit, infusing the pain of each into the other. The shock turns Puma back into Thomas Fireheart. Nocturne convinces Spider-Man to let Fireheart walk away. Then, for a second time, she refuses his offer to go to Dr. Kafka. She flies away, seeking her destiny, which has never been revealed.