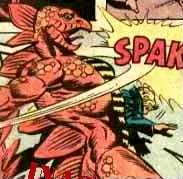 Dr. Vincent Stegron was working as an assistant to Dr. Curtis Connors (the human alter-ego of the Lizard) on a project for SHIELD that used dinosaur tissue supplied by Ka-Zar from the Savage Land. Vincent became obsessed with the Lizard experiments and decided to steal (or "sssteal", in Stegron- speak) the dinosaur extract. He fled to the Savage Land and ingested the formula, turning himself into a Dinosaur Man.

Spider-Man travels to the Savage Land, teams up with Ka-Zar and finds Stegron in full reptile mode, ruling over the Swamp-Men. His plan? To RULE THE WORLD! When Spidey and Ka-Zar beat up on his Swamp-Men, Stegron escapes to New York on a flying Ark. He takes a few dinosaurs with him.

Sure enough, soon after, Stegron leads a stampede of dinosaurs down Broadway. He is stopped by Spider-Man and the Black Panther and tries to escape on a pterodactyl. Instead he is knocked into the water by Spider-Man and sinks like a rock.

But Stegron reduces his metabolism and eventually drifts to shore. He returns to Manhattan, kidnaps Billy Connors and forces Curt Connors to work for him. He creates a "retro-generation ray" that animates the dinosaur skeletons at the Natural History museum. Under the strain of Billy's kidnapping, Curt Connors turns into the Lizard and goes after Stegron. Unfortunately, Stegron chooses December to start his plan and eventually succumbs to the cold weather. He slips under the ice on a Central Park lake and disappears from sight.

Somehow Stegron survives, reverts to human form and becomes a homeless resident of the park. In the wrong place at the wrong time, he gets hit by a stray shot from a Nuclear Blaster wielded by the Vulture and is changed back into the Dinosaur Man. He returns to the Museum of Natural History, with plans to create a race of dinosaur people but ends up in the midst of a struggle between Spider-Man and the "Lethal Foes", Doctor Octopus, the Vulture, the Rhino, the Beetle, Boomerang, the Answer, Swarm, Strikeback, and Hardshell. Stegron tries to steal the Nuclear Blaster to create his dinosaur army and, well, he doesn't pull it off. Instead, he gets blasted into unconsciousness by Strikeback.

Now, growing more and more bestial, Stegron's only desire is to return to his home in the Savage Land. He stows away on a supply ship bound for Antarctica and gets into a SHIELD observation post where he begins killing off scientists. Thunderstrike, the Black Panther and the Black Widow answer the distress call. 'Strike and the Panther release Stegron to the outside elements. The Dinosaur Man tries to make it to the Savage Land but comes up just short, felled by the harsh cold of Antarctica.

But you can't keep a good dino man down. This time, Stegron fell into hibernation, frozen inside a glacier. He thawed and returned to the Savage Land, where Peter and other journalists were investigating the melting ice caps. The Roxxon corporation claimed to be there to try to reverse the process. The company wasn’t trusted by Ka-Zar and his wife, Shanna, the She Devil. They proved to be correct in their skepticism, as Roxxon was actually speeding up the melting to better access oil. The Hulk and Chtylok the Che-k'n Kau arrived to complicate things further. Stegron opted for fighting on the side of the good guys against Roxxon and their armed guards. In the end, he walked off into the sunset vowing to be everybody's enemy the next time they meet. (Sensational Spider-Man (vol. 1) #13-#15)

After defeats at the hands of Spider-Man and other mammals, a despondent Dr. Vincent Stegron traveled to the Arctic Circle for solitude. He didn't believe in fate but had to admit that it was strange that he was a man looking to change the biology of the world and had traveled to the end of the world only to accidentally find a means to that end. Inside the frozen arctic, a small tropical oasis surrounded a meteorite which he called the "rock of life." He had heard of a meteorite that emitted radiation that could alter evolution, a remnant of a interstellar body that had crashed into earth at the beginning of life. Stegron brought the meteorite back to New York, planning to let it's radiation change the people into more primordial lifeforms. The rock also changed him back into the Dinosaur Man and he ate three other passengers on the boat trip back to New York.

Stegron sent the rock via the mail to his former colleague, who contacted Curt Connors for advice. The radiation began by making the animals in the Central Park Zoo aggressive, killing each other and themselves. After that, super criminals with animal monikers began acting like their name sakes: Vulture dropped people and ate them, Curt Connors became the Lizard, Vermin became more aggressive, Man-Wolf attacked Aunt May and Mary Jane at Avengers Tower. Even Black Cat and Puma felt mindlessly violent. Spider-Man followed the advice of Madame Web and went to Central Park, where he found that Stegron had used the meteor to create a jungle filled with velociraptors and giant insects. Inside, a human that was probably an employee had changed into a devolved human.

Black Cat and Puma had found their way to Central Park and quickly defeated the Lizard and Vermin, who were exhausted after trying to eat each other. At the time, Spider-Man was acting as a protégé of Iron Man, who had given him an advanced mechanical costume. Spidey was contacted by Mister Fantastic (whom he had left Billy Connors with after he had also become a Lizard) who told him via the suit's radio that the sensors in the suit could lead him to the "rock of life." After the rock was found, the costume's "smart liquid metal" encased the meteor and cut off it's radiation. Stegron attacked after he sensed the radiation had stopped flowing into the city, but was immediately beaten by Spider-Man. He whined that his beautiful world had been destroyed but was told that he had only ruined lives, all for a rock. (Sensational Spider-Man (vol. 2) #23-#27)

He was briefly seen in the Negative Zone prison while Ben Grimm and the Human Torch looked for the Tinkerer.

"The Land Before Crime"

Stegron had been forced by the military to be a test subject at Alchemax Industries for use in regeneration experiments for soldiers. He and many mutated volunteers escaped with $70 million of experimental equipment from Alchemax, which resulted in Liz Allan sending Venom to bring him back. When Venom arrived at Stegron's underground hideout, he found many more dinosaur men than he had expected and was about to retreat when he was knocked into the cavern by a huge creature. The dino men brought the unconscious Venom to Stegron, who reminded his followers that mammals are weak. (Venom #151)

Stegron explained that the creatures around them were all once the rejects of society, from humans to rats. He changed them and saved them, for in dino society all are equal. He was about to give Venom a dose of tne transforming chemicals when Venom broke free and broke a wall in the cavern, causing a flood. Venom was washed away by the torrent. Venom returned later, with Moon Girl and Devil Dinosaur. Stegron was giving his chemical to a stray kitten and was interrupted by Devil Dinosaur, who crashed through the cave wall. It was soon under Stegron's mind control and was turning against Venom and Moon Girl. (Venom #152)

Devil Dinosaur chased them out of the sewers but was warned by Stegron to not be seen by the humans yet. As they returned to the underground, Stegron promised that once they changed the world, Devil Dinosaur would be his steed. Stegron and his minions were preparing to dump their chemicals into the New York water supply when they were attacked by Venom and Moon Girl. As Venom blocked Stegron's telepathy on Devil, the transformed humans attacked. As he was about to release the chemicals, Stegron was stopped by Moon Girl, who told him she had chemically made his elixir inert. He was about to kill the hiding girl when Venom washed him away by releasing the water from the city's water works. Stegron was soon unconscious and webbed up. (Venom #153)

Stegron at some point was captured by the mercenaries Taskmaster and Black Ant. They turned him over to Arcade and Kraven the Hunter, who was using him and other animal related criminals as prey for wealthy elites. He was quickly on display for the hunters alongside the Vulture, Rhino, King Cobra, Tarantula and Scorpion. (Amazing Spider-Man (vol. 5) #13) He was one of the lucky survivors and escaped with the Sinister Syndicate. (Amazing Spider-Man (Vol. 5) #23)