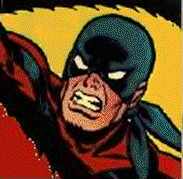 After being cashiered from a revolutionary organization because he was too violent, Anton Miguel Rodriguez became his government's top operative and proved too violent for them as well. Setting himself up in the more tolerant New York City as a professional criminal, he hi-jacked a boat that Peter Parker and the Punisher both happened to be on. Although he initially escaped, Spider-Man eventually caught up with him and handed him over to the local authorities.

In prison the Tarantula was able to re-make his spiked shoes and, with the help of the Jackal, escaped. There followed a series of adventures that involved the likes of Captain America, the Lightmaster, Kraven the Hunter and the Brand Corporation. Furious at yet another defeat by Spider- Man, the Tarantula agreed to undergo an experiment meant to re-create the powers of Spider-Man. The experiment was disrupted by Will O'Wisp, and the Tarantula emerged an eight-limbed, spider-like creature with limited intelligence. Unable to bear life in his new form, the Tarantula threw himself into a police barrage of bullets and committed suicide.