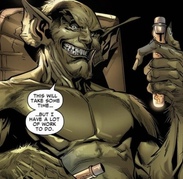 Professor Warren Miles was a brilliant biologist that worked on the cutting edge of cloning technology at Empire State University. He was also a family man, married to a beautiful blond wife, Monica Warren. They had two young children that they loved deeply, but soon his research consumed him. He was busy working when Monica left with the children, not even noticing that they left, but he never forgot the phone call from the police saying that they had been killed in a car accident.

His life fell apart, and only his work gave him any comfort at all, minor though it was. His life was a deep black hole, until a pretty new student named Gwen Stacy entered his life. He quickly fell in love with her and was devastated when she was killed after being kidnapped by the Green Goblin.

Warren grieved deeply for Gwen, until the next day, when his assistant, Anthony Serba, rushed into his office to tell him that he had just successfully cloned a frog. Seeing his chance to right a wrong, Miles gave Serba tissue samples taken from Gwen during an earlier experiment, telling him that they were rat cells. A month later, Serba ran to Warren to tell him that the clones were human and had to be destroyed immediately. Panicking, the professor covered Serba's mouth to shut him up, and accidentally suffocated him.

He disposed of the body, all the while telling himself that he couldn't have killed Anthony, it had to be somebody else. Walking past a class, he heard the professor describe the jackal as a "cowardly predator" and Miles blamed Anthony's death on the Jackal. Miles worked diligently over the next months, working on creating the Gwen Stacy clone and honing his body to peak human perfection. Before wiping her memory and hypnotizing her, he promised Gwen that he would find the man that had killed her and that she would witness his death. All the while he threw various super villains at the web slinger, such as the Scorpion, the Punisher, Tarantula (Rodriguez), Hammerhead and the Grizzly.

The Jackal wore an tight-fitting Olive Green costume with a slightly furry appearance to it. Dr Warren was remarkably well muscled. The outfit had razor-sharp claws which were typically tipped with some sort of drug. Physically he was no real match for Spider-Man, but with planning, psychology, and by enlisting several allies he was able to overcome Spider-Man on numerous occasions.

Peter Parker was also a student of Miles Warren and had also given tissue samples for the same assignment. This allowed the Jackal to clone Peter, and to use the clone to punish Spider-Man for what Warren Miles believed was his fault in Gwen Stacy's death. Upon successful cloning of Spider-Man, the Jackal kidnapped the original and forced them to do battle in Shea Stadium while a kidnapped Ned Leeds watched with a bomb strapped beside him. The Jackal cackled with glee as the two Spider-Men battled in what he called "the greatest identity crisis of all time! It's glorious! GLORIOUS!"

The Gwen clone then came to her senses and screamed that Warren was nothing but a monster and a "heartless fiend." Miles stopped lying to himself and took responsibility for Serba's death and freed Ned just before the bomb exploded, leveling Shea Stadium. The Jackal was killed, as apparently was the Spider- Clone. The Gwen clone left New York to start a new life for herself and Peter Parker returned to his ordinary, web slinging life.

Of course, we all know that the clone didn't die. He survived and gave himself a new name, Ben Reilly (named after Peter's Uncle Ben and his Aunt May's maiden name). Neither had the Jackal died, as he wasn't even at Shea Stadium when it was destroyed. He had sent a clone of himself in his place, while he was undergoing genetic enhancements to become stronger and faster in a regeneration tank, waiting for the day he could begin his master plan. His plan? To destroy humanity and replace it with genetically perfected clones. He even had the way to commit the global murder: a deadly disease known as the Carrion Virus.

The Carrion Virus had been a part of various super murderers called (not surprisingly) Carrion. The most recent, Malcolm McBride, had been cured of his disease by Shriek, who was dying of the virus. Jackal, who had allowed himself to be captured by Spider-Man and the Scarlet Spider, was sent to the Ravencroft Institute and very painfully extracted the virus from Shriek.

With the virus back in his hands, Jackal's only problem was that the cloning process was imperfect and tended to produce clones with degenerative disease. In fact, the Peter and Gwen clones were the only perfect clones that he had ever made. This made him need to capture and study them to learn what kept them from degenerating. Thus began the Clone Saga, one of the most reviled stories in Spider-Man history. Dr Warren used many clones in his schemes: Kaine, Carrion, Spidercide, Ben Reilly and many others. This all became very confusing, which is why I will just give the basics of The Saga.

Ben Reilly returned to New York when he realized that Aunt May was dying. He had called her many times during his exile just to hear her voice. While he was a clone, he still felt affection for Peter's loved ones. The homicidal and imperfect clone known as Kaine followed Ben from Salt Lake City, determined to kill the man that he was jealous of. The return of the clone badly unhinged Peter, who had just lost Aunt May, Harry Osborn and his "parents" (who were really robots sent by Harry to kill Peter). Peter only came back to his senses when Mary Jane revealed that she was pregnant.

After Peter was acquitted of the murder of a Salt Lake City officer (who was killed by Kaine) Ben and Peter went to Dr Seward Trainer, a friend of Ben's, to find out who was the real Peter Parker. The test was conclusive: Ben was the real Spider-Man. The Jackal then was revived from his regeneration tank and began manipulating the emotionally vulnerable Spiders. He led them around for a while, keeping them off balance as to whom was real. Meanwhile, he performed a test run of the Carrion Virus on the small town of Springdale, Pennsylvania. The town was destroyed, except for Rafael Caraga, who was mutated by the virus and became Helix.

By the time he conclusively told Peter he was the clone, Peter was ready to do anything to somehow belong. As a clone, he no longer felt human and readily joined his "brothers:" Kaine and Spidercide, Jackal's bodyguard. Warren then had Peter go after the Gwen clone, whom he needed to find out how she had not succumbed to the Degeneration disease. Gwen came back with Peter but intended to kill Dr Warren. Jackal had taken over the Daily Bugle in order to clone the reporting staff. With the clones of the journalists under his control, the public wouldn't panic when rumors of a virus wiping out humanity began to spread.

Peter, Ben, the Gwen clone and Mary Jane arrived to fight the Jackal. A battle royale broke out and The Jackal was defeated when he tried to save the Gwen clone from falling from the roof of the Daily Bugle, but fell to his death.

This guy just wont stay dead. He appeared again, years after his defeat at the Daily Bugle at Peter and Ben's hands. Warren released genetically altered spiders into Manhattan, which granted powers similar to Peter's to anyone they bit. Jackal started the chaos by granting these powers to gang members and then releasing them into the city. He also was back with two enforcers: Tarantula (the resurrected Kaine, returned after being sacrificed by Sasha Kravinoff) and Spider-King (a mutated Captain America.) Both of these bodyguards were grotesque human/spider hybrids. (Amazing Spider-Man #666)

Jackal had been working in an underground lair beneath the former site of Shea Stadium, where he mutated the back-from-the-dead Kaine into Tarantula. The lair was destroyed after a battle with another Gwen Stacy clone (this one infected with the "Carrion virus.") After Tarantula rescued Warren from the wreckage, they were approached by a mysterious woman, who offered a partnership with Jackal. She was later revealed to the Ana Soria, aka the Queen. The partnership fell apart after Anti-Venom was captured by Flash Thompson and turned over to Reed Richards to produce a cure for the mutations. Tarantula was sent to Horizon Labs to destroy the antidote, but was stopped by Spider-Man. Miles was stunned that Tarantula had been defeated and the Queen took out her rage on him, killing him with her scream. (Amazing Spider-Man #671)

Naturally, that Jackal turned out to be a clone. The real Warren was seen later, having expected something like that to happen to him, had he stayed too close to the Queen. He and his clones were masquerading as the clean up crew of the Queen's gigantic corpse, having big plans for her DNA. (Amazing Spider-Man #673)

He returned some time later, with teenage clones of the Queen. He kidnapped a teenage boy named Andrew Maguire, aka "Alpha." He cloned the intensely powerful teenager and intended to mate him with the clones of Ana Soria. The cloning process was useless as the accident that gave Maguire his powers didn't change his DNA, making cloning pointless. As Alpha destroyed the clones of himself and Soria, the Jackal clone self destructed. (Amazing Spider-Man #693)

He showed up again later after tinkering with Mister Sinister's laboratory. He created a giant spider clone that combined mutant, human and spider DNA and released it on New York. The creature was defeated and analyzed by the X-Men and the Superior Spider-Man. (Avenging Spider-Man #16) Jackal later sent Carrion out to possess various human heroes (Dagger, Moon Knight, Daredevil, Power Man, Doctor Strange, Sun Girl, Gravity and Ant Man) all of whom were eventually defeated by Spider-Man (Octavius). (Superior Spider-Man Team Up #1)

Warren later showed up in New York as the Scarlet Spider and Spider-Man were beating each other. Jackal had created human-spider hybrids and let them loose on the vigilantes. As the battle began to turn against Warren, a new Gwen Stacy clone showed up with some high tech weaponry and beat both Spider-Men. (Superior Spider-Man Team Up #2) At his warehouse hideout, Jackal explained to his captives that he planned to use Spider-Man's DNA to splice into new human-spider hybrids, which would replace humanity. Kaine managed to escape his chains and fight Jackal and his creations, while Spider-Man set about destroying the harvested DNA. Both Spider-Men escaped and Peter's DNA was charred but Jackal did manage to escape with a vial of Kaine's DNA. He knew that making a clone of a clone might be a bad idea but he did look forward to Spidercide 2.0. (Scarlet Spider #20)