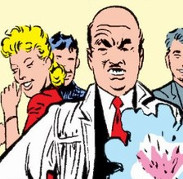 Mr. Raymond Warren was Peter Parker's science teacher at Midtown High School. He appeared to have a multi-sided attitude towards his top student, Peter Parker. In Amazing Fantasy #15, he commends Peter on his good work, and assures him that he will be sure to get a scholarship if he continues as he is going. In Amazing Spider-Man #2, Mr. Warren berates Peter for ignoring his experiment to read "lurid magazines" (i.e. "Now" magazine, which has the request for Vulture pictures which pique's Peter's attention). But in the backup story in that same issue, Mr. Warren warmly recommends Peter as an assistant to Professor Cobbwell. Cobbwell subsequently becomes a target for the Tinkerer's spying ring, but that's not Mr. Warren's fault.

In Amazing Spider-Man #8, it is Mr. Warren who introduces Mr. Petty of I.C.M. and his "Living Brain". Mr. Warren subsequently asks Peter to take the machine's output (presumably containing the answer to Spider-Man's identity) home to translate. Actually, it's funny that Peter has time to translate ALL the inputs into mathematical symbols during class - but then doesn't seem to have time to translate the single output from symbols, it will take so long he has to do it overnight! But enough nit-picking.

In Amazing Spider-Man #15, Mr. Warren again berates Peter. This time, Peter has screwed up his experiment, in fact because his hands are shaking thanks to Kraven the Hunter's jungle poisons. Actually, Mr. Warren is more sad than angry, seeing his favourite student make an atypical error in his work.

That's all for the Amazing Appearances. Mr. Warren does turn up again in Untold Tales of Spider-Man #25, where he offers to introduce Peter to his brother, Professor Miles Warren, during the open day at Empire State University attended by Peter Parker and other soon-to-graduate Midtown High School students.