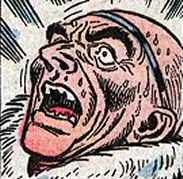 The third man to wear Adrian Toomes's wings was Dr. Clifton Shallot. A professor at ESU, he was an expert in bio-mutation. He initiated a project which involved the Vultures wings and costume, which he requisitioned from the State Prison Authority.

When one of his courses was canceled by the university trustees, something snapped in the doctor's head, and so he underwent the final stage of the mutation himself. The result was a change in Shallot which no amount of expertise and practice could do for Toomes: his face, teeth, and fingernails mutated, and for a short time, the wings became part of his body.

He then went on a mission to destroy the woman who knew of his secret, Christine Murrow, his lab assistant. He went to her apartment to kill her and mistook her room mate, Gloria, for Christine. Mary Jane was a witness to the murder (she lived in the same apartment building as Christine and Gloria), and also became a target. Shallot attacked Mary Jane at ESU while Flash Thompson was dropping off her and Peter in his car. Mary Jane was momentarily taken and Flash crashed into a telephone pole. Spider-Man saved MJ and Christine from the Vulture.

Shallot discovered that the mutation was reversible, with the appropriate chemicals and he took to stealing them. This link provided to be the clue for Spider-Man to determine the new Vulture's true identity and eventually track him down. In the meantime, Shallot tried again to kill Mary Jane, as she was leaving to confess what she witnessed to the police. Spidey scared Vulture away and later found him with Christine. She had promised to help him to save her own skin. She even managed to get her room mate killed, as they often shared clothing. Christine had hoped to trick Shallot into thinking she was dead by letting him kill Gloria Jenkins.

Vulture was stopped by Spidey pouring an antidote down his throat. Dr. Shallot is presumably still serving his sentence for murder.