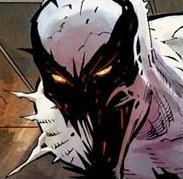 While Eddie Brock was waiting to die of cancer, which he blamed on years of being bonded to the Venom symbiote, he met Martin Li, the head of the F.E.A.S.T. organization. Mr Li cured Brock of his cancer, but the cure somehow mutated the tiny fragments of the symbiote that remained in Brock's system. At the same time, the Thunderbolts, a team of super criminals forced by the U.S. government to track down unregistered super humans, were in New York looking for Spider- Man. (Amazing Spider-Man #568)

Mac Gargan (Venom III) was using the symbiote's ability to track down former hosts to find Spider-Man, but found Brock instead. Eddie wanted nothing to do with Venom, saying that since he met the creature, he life was nothing but misery. As soon as the symbiote touched him, it recoiled in pain and terror. Being in contact with the symbiote also caused Brock to change into Anti-Venom, a creature that hates Venom with a passion. (Amazing Spider-Man #569)

The fight drew the attention of Spider-Man, who wanted to protect Aunt May (who was a volunteer at F.E.A.S.T.) from the creatures. Eddie's instinctive hatred of Spider-Man was reversed when he saw Spidey save an old man from the rampage of the fight. They decided to cooperate against Venom. As Spider-Man held on to Gargan, Anti-Venom used his burning touch to try and kill the Venom symbiote. He almost succeeded (leaving Gargan a whimpering heap on the street) when he also sensed trace amounts of the symbiote in Spider-Man. Anti-Venom tried to rid Spider-Man of the remains of the symbiote when he also noticed that Spidey's blood was irradiated. He decided to clean that up too, despite Spider-Man's protests. (Amazing Spider-Man #570)

He was distracted from the task by the Thunderbolts retrieving Gargan. He hadn't completely removed Spider-Man's powers, but had done enough to weaken Spidey every time he got close to Anti-Venom. The Thunderbolts got away, and Brock followed them. (Amazing Spider-Man #571)

At the Thunderbolts headquarters, Anti-Venom is disguised as a guard. He listens in as Norman Osborn reveals a plan to use Spider-Man's own tracking technology against him. (The camera that Peter uses to take his pictures as Spider-Man uses the spider symbol on his costume as a homing device, so Spidey is always in the picture. Norman reverse engineers the signal so the Thunderbolt guards cant miss Spidey when they shoot at him.) Brock tags along with Bullseye and the guards as they hunt Spider-Man, and helps him with the guards after he was shot. (Amazing Spider-Man #572)

After they escape from Bullseye, they head to OsCorp to bring the fight to Osborn. (Spider-Man had been accused of a series of murders, a reason that the Thunderbolts had been sent to arrest him.) They go in separate directions, as Anti-Venom will weaken Spider-Man and as Spidey says, he just doesn't like Brock. As Spider-Man confronts the Green Goblin, Anti-Venom quickly defeats Radioactive Man and Songbird, but is taken by surprise by a Scorpion suit enhanced Gargan. (The Venom symbiote was too weakened to be much of a player in the fight.) Scorpion stings Anti-Venom with a poison that undoes the Anti-Venom mutation. Brock is about to be killed when the symbiote forces Garagan to let him live. After all their years together, the symbiote still "loves" Brock. After the fight is over, Brock senses much evil in New York and makes it his duty to clean it up. (Amazing Spider-Man #573)

One of his first acts of redemption was to cure a young girl of her heroin addiction. He is then attacked by Mr Negative's Inner Demons, who try to "cure" Brock of Anti-Venom with the same compound that Gargan used. Anti-Venom survives and finds out the secret of Martin Li. He hates that he is a mutated vigilante, as no one will believe him if he told them of Li's double life.

The knowledge that the man that saved his life is a murderer further destabilized Eddie's psyche. His "cleansing" of New York's drug addicts and dealers became more and more violent. This brought him into conflict with the Punisher as Anti-Venom and his friend, Jenna Cole, confronted the Quintas gang. Castle shot Anti-Venom when he learned that he was Eddie Brock, causing some tension between the vigilantes. Jenna (a former drug addict) was kidnapped by the Quintas and Punisher and Anti-Venom went after her. Castle tried to kill Brock two more times in their partnership, but in the end, Brock escaped with the drugged up Jenna. (Anti-Venom: New Ways to Live #1 - #3)

"Infested: The Road to Spider-Island"

Anti-Venom resumed his war on Martin Li, catching some of Mr Negative's goons importing drugs into New York. The thugs seemed more afraid of a mysterious vigilante called the Wraith than they were of Brock. This he had to see for himself. He found the Wraith standing over a terrified punk with her mask off, exposing the face of the long dead police captain, Jean DeWolf. She left as soon as Anti-Venom saw her, leaving him dumbfounded. (Amazing Spider-Man #663)

Brock, disguised as a homeless man, caught up to Li at F.E.A.S.T. Aunt May was also there, handing out copies of Peter's article in a science magazine. Seeing Martin Li reminded May of seeing him kill a man and she collapsed. Li left, and Brock went after him, feeling guilty that he didn't prevent May's shock by killing Li sooner. Anti-Venom attacked Li in his limousine, tearing the roof off the car. He was then stopped by Spider-Man, who was quickly overcome by the enraged Anti-Venom.

Spidey woke up later in an abandoned meth lab, which Brock had made his new headquarters. Anti-Venom was willing to cut Spider-Man a break, as he knew that Spider-Man had a history of attacking other vigilantes and then teaming with them after the misunderstanding was cleared up. He tried to unmask him, but Peter managed to use his clinging ability to keep the mask attached to his face. Eddie acknowledged their lack of trust and promised that Spidey would change his mind about him after he proved that Martin Li was Mister Negative.

Brock left Spidey alone to stake out Martin Li, and learned that he was over seeing a large shipment of drugs from Asia. The drugs were hidden in terra cotta statues that were being shipped to a museum in New York. Brock took a webbed up Spider-Man to the museum later that night to ambush the smugglers. Brock was stabbed by Negative, who was laying in wait for him. While Anti-Venom can usually heal a serious wound in seconds, Negative had managed to negate the accidental gift that Martin Li had given to Brock. Spider-Man was soon freed by the Wraith, a New York cop passing herself as the dead police officer Jean DeWolf.

Wraith, Spider-Man and the injured but tenacious Anti-Venom took on Mister Negative and his gang of Inner Demons. The battle was a stalemate, until Wraith used her ID technology to determine that Martin Li and Mister Negative were one and the same. This stunned Spider-Man, who believed that Brock had been delusional in his connecting Li and Negative. Negative promised that none of them would ever share the secret, until Wraith managed to hack the social and local media, sharing her evidence with everyone with a TV or computer. Negative and the Inner Demons fled and Anti-Venom felt vindicated. He hoped that others wouldn't just see him as just "crazy Eddie Brock."

Brock became a hero to dozens of New Yorkers during Spider Island. The Jackal and the Queen had returned and were behind the mutations of 99% of Manhattan's citizens into human spiders. He had the ability to cleanse them of the foreign DNA, but it exhausted him. He was also confronted by Flash Thompson, who was working with the military as Agent Venom. Flash was there to bring him to Reed Richards, who could possibly use Brock's healing abilities to find a cure for the mutations. Brock was less than willing to go with his former symbiote and a battle broke out. The alien tried to leave Flash to re-join with Eddie but only Flash's pleading and lying to it convinced the creature to return to him.

They then took the weakened Anti-Venom to Richards. At Horizon Labs, Brock was used to create a cure, despite the interference of Tarantula and the mysterious assistance of Michael Morbius. Brock assisted willingly, despite the warning that afterward, he would never be able to be Anti-Venom again. Peter soon realized he had the perfect means to deliver the antidote to the millions of infected New Yorkers, with Doctor Octopus's tiny octobots. (They had been in NYPD storage after Ock used them to reprogram New York's machinery.) After the people were changed back to normal, Brock was given credit as a city hero.

While Brock became powerless without Anti-Venom, he still intended to wipe out the symbiote menace. He hunted down and shot Scott Washington and stabbed Donna Diego with a hot sonic knife. His last target was the Venom symbiote itself, which was still bonded to Flash Thompson. Thompson was about to kill the Crime Master when Brock interfered. Venom left Brock webbed to the wall but was forced to run when Crime Master's thugs (Megatak, Death Adder, Jack O'Lantern VI, the Human Fly) came to protect their boss. Eddie was taken prisoner by the Crime Master and forced to bond to the captured Toxin symbiote. He was then given the task to kill Agent Venom. Toxin/Brock held their own against Agent Venom, but Eddie was beaten when Flash used some sonic spray against him that Peter had given to Betty. Flash contemplated killing the unconscious Brock, but webbed him up instead.

The next person to call themselves Anti-Venom was Flash Thompson.