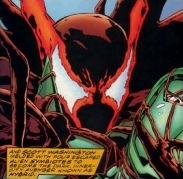 Scott Washington grew up in Brooklyn, New York, a place that was run by gangs. Despite the odds, Scott became a police officer and was obviously good at his job, as he became part of the elite Guardsmen security team at the Vault. (The Vault is a prison designed in mind to hold super criminals.) While stationed at the Vault, he was in charge of guarding the four symbiotes that were forcefully spawned from Venom.

The symbiotes had been taken by the Life Foundation (an organization dedicated to helping society's elite survive if there were a major disaster), who hoped to use the symbiotes to protect their customers if they were attacked after any catastrophe. However, one of the hosts (Scream) that was bonded to her symbiote was insane and murdered her four comrades (Lasher, Agony, Riot and Phage). The alien creatures survived and were being studied at the Vault after their capture by Venom and Spider-Man. The experiments caused them incredible pain and they were released by Washington.

He was immediately fired and returned to Brooklyn. His brother, Derek, was killed in a shooting involving the Easy X gang, the same which cost Scott the use of his legs. The four symbiotes tracked him down from Colorado and bonded to him, giving him back his ability to walk. Scott's melding with the symbiotes was unique: they held him back from violence and his desire for revenge. He also has to deal with four voices in his head. Eddie Brock and Cletus Kasady are plenty crazy in their own right, but they only have one symbiote each whispering in their heads! I don't know how Pat Mulligan deals with it.

Anyway, he got revenge on the Easy X gang and was captured by the Jury (a vigilante group that acts as judge, jury and executioner). He was rescued by the New Warriors. He was offered a place in the Jury (odd, since they were going to kill him) but he decided to dedicate his life to helping his part of Brooklyn. He has also been considered as a potential staff member of the Initiative, the fifty state plan created by Tony Stark. After the Superhero Civil War and Superhuman Registration Act, it was decided that each state would have its own super hero team.

Hybrid stayed out of the public eye for quite a while, until Cletus Kasady took a small town in Colorado hostage. The Avengers (Spider-Man, Captain America, the Thing, Wolverine and Hawkeye) were sent in to bring Carnage in, but they were quickly entrapped in the Carnage symbiote. (Kasady had devoured much of the meat in a nearby slaughter house, amping up his symbiote.) As the government lost contact with the Avengers, they decided to call in a task force made up of symbiotes. Washington had been murdered by Eddie Brock (without even the faux-symbiote that made him Anti-Venom) in an attempt to destroy all symbiotes. While Washington was gone, the symbiotes apparently survived and were captured by the military and re-bonded to a task force.