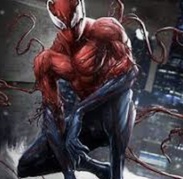 Recently Carnage had become enraged over his imminent asexual pregnancy and he and Venom battled over the fate of the next incarnation of their species. Carnage being the nine hundredth and ninety ninth symbiote meant that his offspring would be the 1000Th of their line. Venom wished to ensure the survival of the creature as he was fearful it could incur a psychotic breakdown unless he educated it in the ancient ways of their species. He also believed that in doing this he could form a bond with it and forge an alliance against Spider-man. Carnage however wanted it dead as soon as it was born, as in his own words- 'I AINT HAVING MY OWN GENES COMING BACK AND BITING ME.' Carnage burrowed deep beneath the city streets to 'give birth'. In doing this he ruptured a gas main which drew the attention of the NYPD to the area. Officer Pat Mulligan was on site when Carnage emerged from the crater caused by the explosion. Since Carnage was too tired to kill anyone after the birthing, he planted the symbiote spore on the back of officer Mulligan unbeknown to him, and pronounced he would return once rested.

Pat Mulligan was the latest in a long line of Irish NYPD officers, following in the footsteps of his farther and his grandfather before him and his wife Gina was expecting their first child. Later that evening Venom visited Pat to warn him that Carnage would soon show. Before Venom could explain this Spider-man showed and told the Mulligan's to flee. As Pat and his wife were about to escape Carnage arrived knocking Gina down the stairs before grabbing Pat and making an exit. Gina went into labor and Spider-man took her to the hospital. Pat escaped Carnage and over the next week noticed a heightening of his senses and reflexes along with strange voices in his head. Carnage tracked down Pat again, only this time the new symbiote emerged and with its aid Pat was able to fight off Carnage. Pat and the symbiote now called 'Toxin' later hunted Carnage with the intention of slaying their foe, only for Pat realize he did not have the heart for it.

Following this show of morality, Venom decided that Toxin could potentially become a dangerous ally of Spider-man's and as such teamed up with Carnage to kill the creature. Struggling with the murderous desires Toxin presented, Pat decided to focus this energy through the good he could do. Toxin later defeated Venom and Carnage single handedly, saving Spider-man and Black Cat. After these events Pat left home to protect his family. Confiding his old partner Meadows, Pat explained his situation and that he wanted to aid the police and Soon turned in escaped convict King Cobra, following a breakout at Ryker's. After meeting with Spider-man Toxin learned of, and decided to track Razorfist- an escapee leading a mini crime syndicate, who had huge blades in the place of forearms.

Pat struggled to control the bloodthirsty urges of Toxin and even attempted suicide by jumping in front of a subway train only to be saved by the symbiote. Toxin and Pat came to a deal in which they would each get two hours a day to spend as they pleased. Pat choose to frequent the park that Gina and his new son Eddie visited, and Toxin got to put Pat to sleep for two hours a night provided that the symbiote not commit homicide, arson, or larceny. Due to his affiliation with Pat, Razorfist hospitalized Meadows and later attacked and killed Pat's father. Finally Toxin tackled Razorfist and easily neutralized his threat, removing his blades. Razorfist returned to Ryker's and Pat arranged to meet Gina and explain why he had left her and Eddie. She didn't take to it well.

At some later time, Pat was separated from the Toxin symbiote, for reasons unknown. The creature is being studied in an underground lab in Las Vegas and is stolen by Jack O'Lantern VI and Agent Venom (Flash Thompson) by the Crime Master's orders. The Venom symbiote still wants its "grandson" dead and its only Jack O'Lantern's interference that saves the trapped alien. Jack only manages to calm Venom down by threatening to kill Thompson's mother and Betty Brant. Later, Agent Venom tries to assassinate the Crime Master but is foiled by Eddie Brock. Thompson escapes but Eddie is captured by the Crime Master's goons (Death Adder, the Fly, Megatak and Jack O'Lantern) and forced to bond with Toxin.

Toxin went after Agent Venom as he was rescuing Betty from Jack O'Lantern and Megatak, causing Flash to drop her while web swinging. Toxin nearly defeated Thompson, claiming that Venom had been "neutered" by the humans and that Toxin would be the only one left for the spawning. Venom beat Toxin with a sonic spray that Peter had given to Betty. Eddie was unconscious and left webbed up. He soon recovered and captured Betty as Flash was busy saving his sister from Jack O'Lantern.

Toxin took her to the abandoned ship yards at Staten Island, where Crime Master had his hideout. Megatak seemed to be defeating Venom when Flash arrived, but Toxin wanted his grandfather for himself and took a bite out of Megatak. Toxin was more than a match for Venom and Flash didn't have time to deal with the enraged symbiote, so he used incendiary bullets to distract the fire-vulnerable creature. Flash managed to force a separation between Toxin and Brock, as their bond was incomplete. Just as Eddie seemed to be safe, the Toxin symbiote grabbed him and attempted to re-bond. The creature was still burning and Eddie was also pulled into the fire.