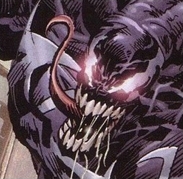 Following Aunt May's disappearance, Peter Parker learned from Mac Gargan that his aunt had been kidnapped by Norman Osborn as part of an elaborate plan. Gargan revealed that the plan was to to break Osborn out of Riker's Island Penitentiary or Aunt May dies. After returning to his apartment that evening Gargan had a surprise guest in Venom's symbiote, and it made Gargan aware that it wanted him as its new host. (It had briefly bonded to Angelo Fortunato, but he "just doesn't have enough venom!")

Gargan and the symbiote bonded to become the latest incarnation of Venom and later showed up to help the Green Goblin ambush Spider-man and Black Cat as part of the new Sinister Twelve after they helped break Osborn out of Riker's in the hope he would lead them to Aunt May.

Soon the Fantastic Four and members of New Avengers showed and helped even the odds following a tip off Mary Jane had detailed to S.H.E.I.L.D. As the Goblin disappeared to make good on his promise of murdering Mary Jane, Spider-man raced homeward hoping to get there first. Venom took up the task of stopping his return home. Due to Gargan's inexperience with the symbiote, Spider-man soon got Venom on the back foot before dropping a condemned building on him, decisively ending the fight. Weakened from the fight, Gargan was soon apprehended by the authorities and found himself occupying Norman's old cell in Riker's.

After finding his way out of incarceration, Venom was transported into space via a star ship after being drawn to a huge alien artifact in central park. He was joined by eight others who had fallen prey to the same trap, including Dr Henry Pym, Gravity and Alyosha Kravinoff. The ship was on a set course for a restored Battleworld. Their captor, an all powerful alien entity who claimed to be The Beyonder would later detail that they were the latest in a long line of combatants in an ongoing experiment he had conducted for many years. Gathering together a collection of humans to have them battle to the death with the promise that the survivor would have any desire realized.

On Battleworld Venom had become estranged from his shipmates and from this point sat in ambush waiting to strike at his combatants when they least expected. Later reunited with his shipmates, the group were witness to the arrival of Uatu the Watcher. Mistaking Uatu for the Beyonder, Venom began to attack the others before Pym blasted him, and the rest of the gang with a shrinking cannon. After this the would-be Beyonder arrived. Since Dr Pym had apparently slain his shipmates, the alien entity asked him what he desired.

Realizing Dr Pym had tricked him by shrinking his comrades down to palm size he was reluctant to cooperate w/ Pym's requests, but with the pressure of Uatu present he agreed. The planet then began to self destruct. Gravity took care of holding Battleworld together so the team could escape to the ship, but later died from exertion. Back on Earth Gargan would show up at Gravity's funeral to pay his respects.

During the conflict that arose amidst the introduction of the Superhuman Registration Act, Gargan was offered a shot at legitimacy. A new Thunderbolts team was assembled by S.H.E.I.L.D. as a secret weapon to aid in combating the resistance. Once again, Gargan was being led by Norman Osborn. The new Thunderbolts were a vastly more ruthless assembly than previous iterations of the group as they now comprised solely of super villains. In creating such a team it was S.H.E.I.L.D.'s belief that it would also serve as a rehabilitation program for them. In the wake of Captain America's surrender 'The Initiative' was launched- at least one Super team in every US state.

Rehabilitation. Right. He was obviously making great progress with that when he tore an arm off of the Steel Spider while taking him into custody, and when he ate the skeleton of Fritz von Meyer. He particularly went ape on Eddie Brock when the Thunderbolts were sent to NYC to bring in Spider-Man. Looking for Spider-Man, he instead was drawn to Brock. Being near his former symbiote caused a mutation in Brock, changing him into Anti-Venom.

The Venom symbiote was very nearly killed by Anti-Venom, when he was saved by the rest of the Thunderbolts. Brock escaped. Gargan was in severe pain after the fight, but was able to heal when Osborn supplied him with a new Scorpion suit to use while the symbiote healed. Gargan met Anti-Venom again at OsCorp, when Brock and Spider-Man decided to confront them by surprise. Scorpion managed to infect Anti-Venom with a poison that ended Brock's mutation and was about to kill him. Gargan was stopped by the symbiote, who still "loved" Brock.

The symbiote was forcibly removed from Gargan after he, Osborn the Dark Avengers and H.A.M.M.E.R. were defeated following the Siege of Asgard. Losing the alien creature was slowly killing MacDonald, and he was rescued by Alistaire Smythe, breaking him out of prison. Performing life saving bio-mechanical surgery on Gargan, Smythe returned Gargan to the identity of the Scorpion. He now posesses a "scorpion sense" which is exactly like Peter's spider sense. He is also permanently connected to the Scorpion suit and will die without it.

The symbiote was taken by the U.S. military for research and was bonded to Flash Thompson, becoming Agent Venom.