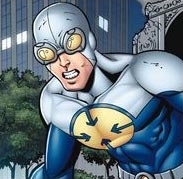 Born and raised in Sheboygan, Wisconsin, Greg had lived a relatively ordinary life until the fateful day of a family boating trip on Lake Michigan. A freak wind storm started up, caused by a miniature black-hole singularity in the sky, and sucked him in. He was found by his parents soon after unharmed. However, in the following weeks, he discovered he had gained the ability to manipulate the Earth's gravity to his will.

Coming to New York to attend New York University, Willis adopted the identity of Gravity with the hopes of joining the super hero community and maybe marketing his image. However, his first outing wasn't so great as upon stumbling into a fight between a villain called Black Death and the New Warrior's Rage, Gravity took down Rage after mistaking him for a villain. Later, Gravity would eventually come up against and take down the Rhino and meet a hero calling himself the Greenwich Guardian. The Guardian took Gravity under his wing to show him the ropes of being a hero, but Gravity soon learned that it was harder than he thought to balance a double life.

When the Guardian disappeared for a while, Greg gave up being Gravity for a bit in order to focus on the budding relationship between him and fellow student Lauren Singh. Unfortunately, the Guardian returned and led to Gravity's return in order to help in defeating the Black Death, effectively running Greg's chances with Lauren. The Guardian had Gravity "borrow" a graviton trap device from a lab to use against the Black Death, only for Gravity to learn that the Guardian himself was the Black Death and the device, combined with Gravity's powers, would create a singularity that could destroy NYU. Gravity managed to escape the device and stop Black Death.

Continuing on as a hero, he had befriended Spider-Man and gotten an invitation to the new Avengers' Christmas party at Dr. Strange's Sanctum Sanctorum. There, he aided the more experienced heroes in defeating an Ultron robot reprogrammed to think it was Santa Claus and calling itself "Santron". Gravity's truly shining, albeit unknown, moment came when a madman named Chronok came from an alternate future and proceeded to decimate the Earth's superhero population. Teaming up with a group of second stringers, he traveled into the future with them to stop Chronok before he could set his plan into motion. Succeeding, the time line was split before the heroes could go back; leaving them stranded in the alternate future while Earth-616 was spared its fate where Gravity still patrols the city and everyone is completely unaware of his role in saving their lives, himself included.

Back in the present, Gravity had finally revealed to Lauren Singh his identity to allow them to have a chance at a relationship. He also managed to pass his first semester at NYU. However, all that was short-lived as he and several other heroes including Spider-Man, Hank Pym, Wasp, the new Venom (Mac Gargan), the new Kraven (Alyosha Kravinoff), Firebird and The Hood were whisked away to the Beyonder's battle planet from the Secret Wars, the Beyonder supposedly having returned to conduct his experiments once again. There, they learn Spidey was truly the Space Phantom and encounter Deathlok who had been stranded on the planet for some time.

In an act of deception, the Beyonder was revealed to actually be none other than the Stranger. The heroes fought against him, and a stalemate as well as fear over the appearance of Uatu the Watcher causes the Stranger to agree to send them back. As the planet disintegrates around them, Gravity uses his powers to get his allies to their escape craft and then pushes his powers to the limit by holding the planet together long enough to allow them to get away. The strain seemingly kills him, but Uatu hints that a cosmic destiny awaits the fallen hero.

Gravity returned as Uatu had predicted, reborn as a protector of the universe at the entity Eon's bidding. Eon was also acting in self preservation, as the planet like creature was next on Galactus's menu. Along with the Fantastic Four, Black Panther, Storm and the Silver Surfer, Gravity saved Eon.