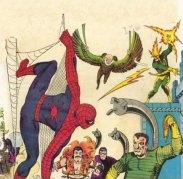 (Individual personal data is featured in their individual profiles)

The Sinister Six was composed by different line-ups throughout the years, so I'll break the profile down by each alignment:

Way back when (1964), all of the above villains had been defeated by Spider-Man at least once. Doctor Octopus, the master planner that he is, got them all together, to plan their revenge against Spider-Man. He convinced them that by working together, they could kill Spider-Man easily. They were to kidnap Betty Brant, who Spider-Man had saved before, and hold her hostage. Then Spider-Man would have to face them all in succession in order to save her. Sandman and Electro kidnapped Betty, and as an added bonus, they took Aunt May with them too, since she was at the Bugle to talk to Betty about Peter.

The first battle place was the Stark Electric Plant, Building #4, where Electro awaited for Spider-Man. Unfortunately, Peter had lost his powers at the time; fortunately, they returned right when Electro shot the first bolt at him. After defeating Electro, he took the note that lead him to the place of the second confrontation, where Kraven and a couple of leopards awaited. Snatching the note from Kraven's back pocket, he left Kraven and his pets behind and flees toward the third confrontation: a warehouse where Mysterio had laid his trap. Dazed for a while, Spider-Man eventually triumphed, and headed to the 4th site to face the Sandman inside an escape-proof iron cell! Unfortunately for the villain, the cell was airtight, and he couldn't hold his breath for as long as Spider-Man, so he fainted. The 5th battle was with the Vulture, on top of a building, and Toomes blackmailed Spidey into dropping his webshooters or he would just fly away with the last card. Smartly (NOT!), Vulture ended up attacking Spidey with a rope, which Spidey just used as a way to capture the Vulture like if he had webs. Finally, Spidey faced Doc Ock in a booby-trapped castle and defeated him, saving Aunt May and Betty.

After this humiliating failure, the original Sinister Six never got together again.

Meanwhile (1986) the Sinister Syndicate (Boomerang, the Beetle, Speed Demon, Hydro-Man and Rhino) was formed. That's a story for another entry, as they are different enough to warrant a profile of their own.

In 1990, the Return of the Sinister Six took place. After 26 years, Marvel thought it was time to bring them back. With Kraven dead, the 4th Hobgoblin (Jason Macendale, still half-demon in this story, due to what happened in the crossover "Inferno") was chosen by Doctor Octopus as the replacement. Meanwhile, the Sandman had abandoned his life of crime, but Octopus blackmailed him into helping anyway, or he'd kill his landlords and their family.

Octopus told the Six that he plans to replace the payload of a college space rocket with a poison gas, holding the world to ransom for an antidote. When the Six stormed in on the launch site, Sandman turned on them and helped Spidey, being promptly turned into a glass statue by Doc Ock. Outnumbered (see, because this time, they actually banded together to fight him), Spidey couldn't prevent Octopus from replacing the payload, and from being poisoned himself...

... Plot twist. Octopus had lied, and he wasn't actually poisoning people, the gas would cure cocaine addition, and make people who suffered from it convulse and suffer greatly. Ock hoped that rather than going through withdrawal, they'd pay for the antidote. Why did he lie? No clue. He'd also keep the money to himself, rather than sharing. As the cops arrived, the Six (but for Glassman) scattered, and Spidey stayed behind to try and cure the Sandman. Unfortunately, Ock's experimental cocaine addiction cure would also destroy the ozone layer, so Spidey had to go after him. Ock gave Spidey the antidote when he realized that Spidey was telling the truth, and Thor dropped by to deliver it and save the world. The end.

In 1992, the five members that were played as pawns by Doctor Octopus banded together to get vengeance against their treacherous ex-leader. Hobgoblin was still half-demon. Sandman conveniently checks up on the Casada's (his landlords) at the beginning of the story, and their house blows up. He blames Ock, but in fact it were the other four villains who blew up the house. He learns that during the confrontation with Doc Ock, and is promptly turned into glass (again). Ock then coerces the four ex-members into working for him again. After that, a ridiculous over-crowded story ensues.

It turns out that Electro was hired by Ock to gather the the other members, and earlier in the story, Ock had stolen adamantium tentacles from an unnamed old-man. The rest of the story pits Spidey (with a metalic arm), Sandman, Hulk, Ghost Rider, Nova, Deathlok (Collins), Solo, Cyborg X, Sleepwalker and the Fantastic Four, versus Octopus, Electro, Vulture, Hobgoblin and Mysterio, all totting guns, and a giant alien named Gog. Oh, and the Six exterminated all life in Gog's dimension to test their weapons, or steal more weapons, or something. The good guys win. The end.

Meanwhile, the Syndicate reunited again (1993). Don't ask me what the line-up was, it was in "Lethal Foes of Spider-Man", and I didn't read that one.

When Doctor Octopus was killed (he got better) by Kaine (1995), Mysterio manipulated the other 4 to obtain Doc Ock's files, technology and arms, though Spider-Man and the Scarlet Spider foiled his plan. The arms were destroyed.

Yes, these Six were Seven. After Kaine killed Doc Ock and the Grim Hunter, these villains banded together to try and kill Kaine before he picked all of Spider-Man's enemies, including themselves, one by one. Spidey's intervention prevented Kaine from killing anyone, and the Seven disbanded.

Fortunately, we were given a few breathing years until they reformed the Sinister Six again, in 1999. This time, Sandman had reverted to his criminal persona thanks to the Wizard, and he gathered the Sinister Six to kill Doctor Octopus. The original Mysterio had died, and the new one, whose identity at the time was unknown, was enlisted. Alyosha Kravinoff, who at the time was being written as if he was the original Kraven, was enlisted too. The other two members were the usual Electro and Vulture. Crossing paths with Venom, they enlisted him too, since killing Spider-Man was also in their "to do" list.

Octopus was protecting the evil alien that was disguised as Senator Ward, and Spidey ended up having to protect them both from the Six. Eventually Venom turned on his allies for realizing they were murderers (well, DUH!). Mysterio and Electro had an ulterior motive, to kidnap Senator Ward. Ward's alien powers woke up and caused a huge explosion, that made everyone scatter while Mysterio and Electro fled with Ward. For a while, Venom chased his former allies, managing to defeat Electro and Sandman. While Sandman suffered from the consequences of that defeat, both of them are pretty much recovered from that.

Yes, you read that right, twelve. In 2005, Norman Osborn formed this group to kill Spider-Man and Black Cat after they broke him out of prison, while he left to go kill Mary Jane. On the losing side, Spidey and the Cat were saved by the timely intervention of the Fantastic Four and some of the New Avengers, and he promptly gave chase to Norman Osborn. Ten villains were defeated by the cavalry, but the newly formed Venom III (Mac Gargan, the former Scorpion) escaped and intercepted Spidey. He managed to defeat Gargan, and faced Norman at the George Washington Bridge, from where he intended to throw Mary Jane off. Peter saved MJ from the fall, and Doctor Octopus arrived to kill Norman Osborn (for reasons explained throughout the storyline, irrelevant to this profile). The two deadliest Spider-Man villains ever faced off on top of the Bridge and eventually fell to an apparent death, with only Ock's unconscious body being found.

This time, its personal! Otto had been told that his time on this earth was short, after years of super human beatings and radiation exposure. Rhino still carried a grudge against Spider-Man for the death of his wife, Oksana. Sandman wanted revenge for the loss of his "daughter." Spider-Man had caused Mysterio and Electro to lose out on their last big scores and the resurrection of Kraven had been a disaster for the Chameleon. This plan was to be Octavius's masterpiece, a fitting farewell to the scum that inhabited the planet. He not only took on Spider-Man but the Fantastic Four and Avengers as well. The Six even went up against against super criminal team: the Intelligencia.

The Intelligencia was made up of M.O.D.O.K., Klaw, The Red Ghost and his Super Apes, Mad Thinker and The Wizard. They had created a device that could focus the earth's magnetic field on a specific point on the planet and blast that spot into space. The Six arrived to stop the Intelligencia from taking over the world. As Octavius explained to Electro, they couldn't let the Intelligencia take over the world in 2011 when the Sinister Six would do it in 2012.

After Octavius took over Col. John Jameson's space ship to launch climate change inducing satellites, he started turning up the heat on earth. He offered to either destroy the planet or save it from man made climate change, as long as the Sinister Six ruled. Spider-Man gathered the Avengers, who interrupted an emergency G8 summit of the world's leaders and top scientists who had gathered to discuss Ock's threat. Al Gore was unmasked as the Chameleon at the meeting, and the Avengers agreed to let him go to force Ock's hand. They also followed him to the meeting place of the Six, where the heroes were defeated by the enhanced criminals.

Electro was blasted into space by Thor, Sandman was defeated in the Sahara by Spider-Man, Black Widow and Silver Sable. They also captured Chameleon in Symkaria, who was posing as Ock. Mysterio was convinced to trade sides after Spidey told him that his $2 billion payday would be worthless if Ock fried the planet. Ock was captured at his base in Guatemala and Rhino was seemingly killed, as was Sable.