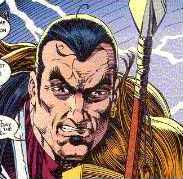 Vladimir Kravinoff was an unwanted son of his father, Sergei Kravinoff, Kraven the Hunter. Sergei hardly acknowledged his son, making him crave his father's attention. (This is a very similar background to Vladimir's half brother, Alyosha Kravinoff.) Yet he also held his father in contempt. Standing in Sergei's mansion in upstate New York, Vladimir told a portrait of his father "You chose to abandon the hunt--to sacrifice a life of honor and respect--here in this house that was never my home. But the Grim Hunter will rise above the sins of the father. And the Kravinoff name will be cleansed..in the blood of Spider-Man!" (Web of Spider-Man #120)

"Beware the Rage of a Desperate Man"

Jason Macendale traveled to Russia to increase his strength with Kraven's formula and both he and Vladimir were pleased with the results of the test. Vladimir ordered his men to kill Macendale, but the Hobgoblin escaped before the threat could be carried out. It was a minor setback, as Vlad now knew that his father's formula was ready for usage. In a extra-sized Spider-Man Vol.1 #50, he had his only fight with Spider-Man, reminiscent of the original Kraven's ways, which ended up by bringing Spidey out of the "I am the Spider" mood, and him and his assistant Gregor into jail, by killing two muggers Spidey was trying to catch.

Vlad bribed his way out of prison and, after visiting the upstate mansion to study footage of Spider-Man in action, he returned to the city and began stalking the Scarlet Spider by scent. Scarlet Spider had previously cleaned up a plot by the terrorist organization A.R.E.S. and Grim Hunter found a group of military police at the scene standing guard. They cornered the intruder and he cut through them quickly. Grim Hunter continued to track S.S.s scent, eventually finding Betty Brant at her apartment. Vladimir saw that Ben was gone and returned to his father's penthouse apartment. (Web of Spider-Man #120)

The following night, Grim Hunter returned to Betty's apartment and found the Scarlet Spider with her. Vladimir was convinced that Ben was really Peter and had merely changed his costume to try and fool him. A brief fight followed and Grim Hunter realized that, while their scent was the same, the Scarlet Spider was not the same as Spider-Man. Their fighting styles were similar, but slightly different. (Spider-Man #54)

At a later date, he followed his senses to the apartment of Peter Parker and Mary Jane. Unfortunately for him, the Scarlet Spider and Kaine were nearby. Ben was too weak from a fight with Kaine, so Kaine fought Vladimir alone. While the Grim Hunter found him to be an interesting foe, his real target was Spider-Man and he abandoned the fight. Kaine followed him to Central Park, thinking that he may be the one that was going to kill Mary Jane, as his visions has predicted she would be murdered. Scarlet Spider left the Park after Kaine was seemingly defeated but little did he know that Vladimir and Kaine would continue to fight without him. In the end, Vladimir was killed by Kaine. (Spider-Man #55)

Vladimir was never the lucky Kravinoff son. His stint at the Grim Hunter was brief, and his resurrection didn't go so well either. Used as a guinea pig by his mother, Sasha Kravinoff, he was reborn using the blood of the fourth Spider-Woman, Mattie Franklin, in a dark magic ceremony. Mattie wasn't a "pure" Spyder, so Vladimir returned as a man-lion hybrid. That wouldn't be too bad, if he could talk or return to human. (Amazing Spider-Man #634) Vladimir joined the hunt against the other "Spyders," (Arana, Julia Carpenter and Kaine) and eventually managed to escape with Arana to use as bait. Chameleon (disguised as Spider-Man's "ally" Ezekiel Sims) brought Spider-Man to the Kravinoff estate where he was overpowered by the hunters and sacrificed. (Amazing Spider-Man #635)

The man in the Spider-Man costume turned out to be Kaine, who sacrificed himself to save Peter. While the Kravinoff family celebrated Sergei's return, Vladimir went to visit the captive "Spyders": Julia, Madame Webb and Arana. He was about to tear Anya's throat out with his teeth when his father stopped him, beating his son's face into the floor. (Amazing Spider-Man #636) Vlad seemed to have taken a liking to Anya, as he was later sniffing the girl, then chuckling to himself when she spat in his face. Sasha killed Madame Web out of frustration then ordered Vlad to kill Jessica and Anya, but he was stopped by Spider-Man beginning his assault on the mansion. Vladimir took on Spider-Man but he was quickly taken out by a tombstone to the head. After the Kravinoffs were defeated, they retreated to the Savage Land, where Sergei killed both Sasha and Vladimir. (Amazing Spider-Man #637)