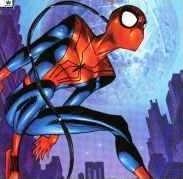 Mattie was a 15 year-old, raised by her father after her mother passed away, when she overheard her father talking to Norman Osborn about a ceremony they were planning on taking part in to gain powers. Mattie took her father's place in the ritual called the Gathering of Five. (Spectacular Spider-Man (Vol. 1) #262)

Mattie was granted powers which included flight, super strength, and other various powers similar to that of Spider-Man. With her new found powers she took on the role of Spider-Man during the hero's absence from crime fighting.

Her first enemy was the Scorpion and she was quickly buried under a collapsed wall. She followed Scorpion to Tri Corp Research Foundation, where Peter was applying for a job. Mattie and Peter managed to defeat him but she was unmasked. She escaped before she could answer any of his questions. (Amazing Spider-Man (Vol. 2) #1)

When Spider-Man finally came back, Mattie took the title of the new Spider-Woman. Later, Charlotte Witter, a new Spider-Woman created by Doctor Octopus, stole Mattie's powers as well as those of the previous two Spider-Women: (Jessica Drew and Julia Carpenter). With the help of Jessica, Julia and Madame Web, Mattie was able to defeat Witter and gain her powers back. When her powers were returned to her she also received the powers of Jessica and Julia including Jessica's Venom Blasts and Julia's Psionic webbing. With the blessing of Jessica and Julia, Mattie went on to continue the mantle of Spider-Woman. She settled in with her Uncle, none other then J. Jonah Jameson, and began fighting crime in the city. (Spider-Woman (Vol. 4) #1-#18)

Jessica's routine was disrupted by her boyfriend who began using Mattie to produce a drug called Mutant Growth Hormone, which, when taken, would give someone mutant powers for a short amount of time. (Mary Jane's boyfriend, Bobby Carr, used MGH. She broke up with him afterward.) (Amazing Spider-Man #605) While using her he kept her severely sedated. During one of her drunken stupors Mattie broke into Jessica Jones' apartment but quickly left when Jones confronted her. Doing a little detective work Jones, with the help of Jessica Drew, rescued Mattie and returned her to her uncle.

She has since joined the Loners, a group of former teenager super heroes. It was founded in part by Phil Urich, the fourth Green Goblin. The Loners hope to prevent bored, inexperienced super powered teens from becoming super heroes, to keep them safe. However, Mattie learned that her DNA had been harvested and sold as a drug to super criminals by Nekra. The blood was used to create Mutant Growth Hormone, or MGH. MGH could be used to give the user temporary super powers. (The Loners (Vol. 2) #1)

“This Man, This Expletive Deleted”

She should have been more careful, herself. While watching a battle between Deadpool and Spider-Man, Mattie was kidnapped by Ana Kravinoff, the daughter of Kraven the Hunter. She was taken to the Kravinoff hunting lodge in upstate New York, where Sasha Kravinoff put her plan in motion. (Amazing Spider-Man #611)

Mattie was used as a test sacrifice by Sasha and Electro. The Kravinoffs were planning to use the blood of Spider-Man to resurrect Sergei Kravinoff, but first used Mattie to resurrect the Grim Hunter, Vladimir Kravinoff. As she wasn’t a “pure” spider, Vladimir came back as lion/human hybrid. (Amazing Spider-Man #634)

Later, Mattie was cloned by the Jackal (Ben Reilly), who was preying on Peter’s guilt over any death he felt responsible for. Reilly told him that the clones were no threat to anyone, they had received therapy from Ashley Kafka. Reilly said he could clone Ben Parker, which Spider-Man refused. Jackal ordered the clones to kill him. (The Clone Conspiracy #4)

Thanks to the Marvel Database, the Marvel Directory and Wikipedia, the free encyclopedia.