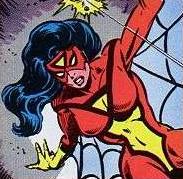 Jessica Drew is/was the daughter of Dr. Jonathan Drew, who was the lesser-known research partner of High Evolutionary. The two of them co-founded the distant high-tech city-state of Wundagore with the money they made from mining uranium. For Jonathan Drew, however, his achievements came with a terrible cost. His young daughter became sick with radiation poisoning.

Desparate, Drew injected his child with an experimental spider-serum, and used the High Evolutionary's genetic accelerator to trigger her recovery. Neither Jonathan nor his wife Merriem lived to see Jessica finally emerge many years later, healed, but with no memories or knowledge. A blank slate, Jessica was not ready to handle normal life, let alone the strange existence that she would be forced to lead by the uncanny powers that she had unknowingly gained as a side-effect of her genetically-enhanced recovery process.

Confused and naive, Jessica fled to a local village, where she accidentally killed a man who seemed strangely attracted to her. In fact, he was simply reacting to the pheromones Jessica now produced - which cause men to be attracted but which equally causes women to despise her. Jessica caused the man's death when she instinctively triggered her bio-electric blast - yet another of the strange powers she acquired during her long "sleep". Her other powers included enhanced strength, speed, and stamina. She can also crawl on walls and ceilings like Spider-Man does, and is immune to radiation and poisons. Later, using the "wings" built into her costume, she could glide on air currents.

Fleeing the angry villagers, Jessica fell into the clutches of Count Otto Vermis, who was in fact an agent of Hydra, the terrorist organization. Too naive to know wrong from right, Jessica was tricked into joining Hydra, taking the code name Arachne and being given her costume. Eventually, Nick Fury of S.H.I.E.L.D. showed her the error of her ways, and she abandoned Hydra, and set out on her own.

Lonely and confused, Jessica fled to London, where she struggled to stay out of trouble with the local police. She encountered the ancient sorcerer Modred the Mystic, who taught her about her past. She also first encountered the cross- time sorceress Morgan LeFay, who was to become her nemesis. (LeFay also created other criminals, such as Excaliber.) Jessica later left England and move to the West Coast of the U.S., where Nick Fury helped her to gain her private investigator license, despite her shady background.

During an epic battle against LeFay, Jessica became stranded on the astral plane, and was only to return years later with the aid of Tigra (Greer Nelson), Doctor Strange, and several of the Avengers. She helped the Avengers a couple of times, saving the life of Giant-Man, before moving to Madripoor with her friend, B-grade actress Lindsay McCabe. By this stage, Jessica had lost her bio-sting and immunity powers. Regardless, she still managed to assist Wolverine in a number of adventures in Madripoor.

Jessica recently returned to New York when Charlotte Witter (the short-lived fourth Spider-Woman created by Doctor Octopus) absorbed her remaining powers. After a confusing series of battles and power-exchanges involving Julia Carpenter (the second Spider-Woman) and Martha Franklin (the third Spider-Woman), Jessica seems to have regained her formidable abilities, although there is some evidence that they are rather unstable. Regardless, she has taken a leading role in the ranks of the new Avengers, and seems destined to return as the one true Spider-Woman.

At an unknown time, Jessica was kidnapped by the Skrulls, a race of shape shifting aliens. Spider-Woman's identity was taken by the Skrull Queen, who infiltrated the Avengers as her minions took strategic positions around the world. Many other super heroes and their friends were infiltrated by the Skrulls during the Secret Invasion, some of which were Edwin Jarvis, Sue Storm (the Invisible Woman), Black Bolt and Elektra.

The Invasion was ended by Norman Osborn, who delivered the kill shot to the Skrull Queen. After becoming a world wide hero, Osborn took over S.H.E.I.L.D. and re-named it H.A.M.M.E.R. Osborn made deals with Doctor Doom, Loki, the White Queen, the Red Hood and Namor to rule the world. Meanwhile, Jessica was rescued from her Skrull captors and became a feared and hated young woman. She was looking for payback against the creatures that ruined her name and reputation and became a bounty hunter for the remaining Skrulls that inhabit the earth.

She soon teamed with Peter Parker and other Spider-Men and Spider-Women from other dimensions. The Inheritors, an ancient race of psychic vampires, had been killing Spider-Men of various dimensions and would eventually kill them all. She joined Spider-Man, Silk, Spider-Girl (Mayday Parker), Spider-UK, Anya Sofia Corazon, Spider-Man 2099 and Spider-Ham to protect each other soon after Peter and Silk defeated the Looter. They then traveled to a dimension that had a Cosmically Powered Spider-Man, who was powerful enough to even keep the Inheritors away. (Amazing Spider-Man vol 3 #9)

The team soon discovered another group of Spiders and traveled to the year 2099 to convince them to join them. This expedition force was made of Spider-Man, Silk, Scarlet Spider III, an alternate version of Ben Reilly, Spider-UK, Spider-Ham, Spider-Girl, Spider-Man Noir and an older Spider-Man. The leader of the team from 2099 turned out to be the Superior Spider-Man, who wasn't happy to see the other team arrive so soon. He claimed to have invented a device that would block their spider-pheromones from the Inheritors, making it impossible for them to be located, but the sudden influx of Spiders was too much for his machine to block out. He was proven right, when the Inheritor called Daemos arrived to feed on them.

During the battle, the Scarlet Spider and Superior Spider-Man managed to kill the creature, though their victory was short lived. Daemos returned with his siblings, Brix and Bora, forcing the Spiders to retreat to other dimensions. Silk, also known as the Spider Bride, tried to draw the Inheritors away from the others, and was followed by Jessica and Spider-Man Noir. (Amazing Spider-Man vol 3 #10)

While observing the Looter robbing a rug store, she saw him being captured by Venom. She decided to take them both to the police, as Venom was a multiple murderer. He promised that he protected the innocent and only killed when necessary but she wasn't impressed. She knocked him on his butt and he still refused to fight, instead opting to leave. When he tried to swing away, she severed the line with a venom blast. Knowing that she valued all life, Venom threw Looter across the street, and escaped as she went to catch him. Jessica tracked him to his apartment and zapped him with a venom blast when he answered the door. She began to drag him away when the symbiote bonded to her briefly, and showed her its past with Brock as heroes. She was shaken by the experience but allowed it to go back to Eddie, telling it to stay out of trouble. (Venom #161)