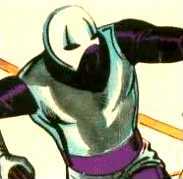 Norton G. Fester is one of those guys with all the ego and ambition you could ask for, but none of the talent or intelligence. He considered himself a scientist, the next Darwin or Galileo...but he flunked out of his science classes. His theory of meteors seeding planets with microscopic life earned him no respect and his cohorts said there was more money to be made in hair tonic research than in meteors. He asked a bank for a loan to begin his research and was quickly denied. Undeterred, he began research on a fresh meteorite sample and hit a gas pocket after chiseling into the space rock. The gas exploded out at him, covering him in a mist that clung to him. He fell over and a cabinet fell on top of him, which he then lifted as if it were a feather. The megalomania soon followed, as he told himself "The world can eventually belong to Norton G. Fester--if I plan carefully!"

His plan for world domination began with bank robberies, which he accomplished with his super strength and dazzle gun, which blinded enemies. The bank robberies ended after his meteorite ran out of mist that gave him his strength. Fearing that he would lose his powers without a continual supply of gas, Fester barged into a local museum... a museum where Peter Parker and Gwen Stacy are both engaged on their separate erudite pursuits. Parker disappears, to emerge as Spider-Man, leaving Gwen with the conviction that Peter is a frightened wimp. While the dazzle gun didn't work on Spider-Man (his spider sense warned him to close his eyes), it did manage to blind the other museum patrons. While they were vulnerable, Looter toppled a giant exhibit on to the crowd but it was caught by Spider-Man and Fester escaped.

Looter failed to capture the meteorite and returned for it later. Spider-Man was waiting for him but was surprised to see that the crook had come with a personal hot air balloon that carried him away after he grabbed the space rock. Spidey managed to web swing to the escaping balloon and the enemies drifted over New York in a midair battle. While Looter and Spider-Man were roughly equal in terms of strength, the webhead managed to knock out his opponent, then let the balloon drift gently down to the police. (Amazing Spider-Man #36)

Years later, Looter was again trying to steal meteors and fought Spider-Man and Nighthawk. Nighthawk thought that Looter needed psychiatric help more than a jail cell and left the fight. He told Valkyrie about his battle with the Looter and she went after Fester, disgusted that Nighthawk let him go. Soon, Looter had caught sight of Spider-Man from his balloon and attacked the webhead, who had forgotten about him. Valkyrie arrived and eventually destroyed Looter's balloon, capturing him. (Marvel Team Up #33)

Sometime later, Fester broke into Empire State University's labs and stole their microwave technology, to improve the transmission of the meteor gas to this nervous system. He was interrupted by Spider-Man and Giant Man (aka Black Goliath). He escaped and the duo followed him back to this hideout, just in time for the Looter to use his new device to become a giant himself. Naturally the science was unstable and he blew up. Another loss for the Looter. (Spectacular Spider-Man #41)

After becoming a homeless alcoholic, Fester turned to home invasion as his crime of choice. He was committing these crimes in Aunt May's Queens neighborhood and robbed the elderly Nathan Lubensky of his engagement ring to May. He tried to pawn the ring and was nearly caught by Spider-Man. Seeing his old foe again caused Fester to become the Looter and he went on a rampage. He attacked the van that May and her boarders were riding in, but he was beaten by a furious Spider-Man. Nathan gave May the ring and she realized she still had feelings for him. (Web of Spider-Man #39)

Spidey very briefly tussled with Fester as he caught the crook attacking a building with a laser cannon. Spider-Man quickly webbed up the cannon then defeated him with one punch. All the while Spider-Man compared Looter to other villains he faced (Demogoblin, the Lizard, Hobgoblin IV, Kingpin, the Green Goblin, Punisher, Kraven the Hunter, Carnage, Doctor Octopus and Venom) and how he could never compare to any of them. (Amazing Spider-Man Annual #26, Story 4)

Looter was hired by an agent of Carolyn Trainer to find out who had attacked her lab and stolen her virtual reality equipment. (Amazing Scarlet Spider #1) Looter worked with Override and Aura to steal back the technology from a mobster named Jason Tso. The components were nowhere to be found but when Looter returned, he found that Aura and Override had been beaten by the Scarlet Spider. Looter smashed a support beam to the building, causing the building to nearly fall on nearby club goers. As Scarlet Spider saved the civilians, Looter grabbed his comrades and escaped. (Spectacular Scarlet Spider #1) Later, as Doctor Octopus was chewing out her hired thugs for their failure, she received a call from Tso who requested a meeting at the Children's Zoo in Central Park. Ben Reilly learned of the meeting and arrived as the Scarlet Spider. He was quickly attacked by Aura, Override and Looter...who were then in turn attacked by Alistaire Smythe's spider slayers. (Smythe was working for Jason Tso.) The spider slayers focused on Trainer's henchmen, turning the tide in Reilly's favor. The machines retreated when FBI agents arrived and the Scarlet Spider escaped. (Web of Scarlet Spider #2)

After Ben Reilly took over as Spider-Man, he faced the Looter again after Fester stole and used weapons from the Shocker, the Ringer, Trapster, Stilt-Man, Mauler and Unicorn to pull off his last heist. After defeating Spider-Man with the Unicorn's tech, Looter webbed him up and took him to his hideout. Looter had learned that there was another meteor, similar to the first one that had given him his strength, and he had created the Meteorator 300 to tap into its power. However, the webbing holding Spidey had weakened and he easily broke out of it and defeated Fester. SHEILD agents then arrived to take the Meteorator. (Sensational Spider-Man #8)

Later, Norman Osborn had framed Spider-Man for assault and then put a bounty on his head. Looter realized that he had no chance against Spider-Man but intended to collect on the money by stealing it from its hiding place at the Daily Bugle. The robbery was halted by Hornet (Spider-Man in a new identity) but Looter took Flash Thompson hostage after he investigated the sound of the fight. Hornet knocked Fester across the face and then Flash took his meteor gun from him. S.H.E.I.L.D. agents then arrived and took Fester and his meteor away. (Sensational Spider-Man #27)

Looter was also present at the auction to sell the Venom symbiote. Many super criminals were in attendance and the creature was eventually sold by Brock to Don Fortunato to be bonded to his son, Angelo. He then became Venom II. (Marvel Knights Spider-Man #6)

Looter has never been a serious threat to Spider-Man but he does sometimes know things about the goings on of other criminals. Spidey captured him during Norman Osborn's Dark Reign, and Fester told him that with Osborn in control of H.A.M.M.E.R., he wouldn't be in jail for long. Spider-Man gave him a wedgie as thanks for the info. Spider-Man suspected him of possibly having a part in the abduction of Harry Osborn and Lily Hollister's baby, Stanley Osborn. Looter told him he had nothing to do with it. (Amazing Spider-Man #645)

The Looter hired Power Man to attack Spider-Man while being given the key to the city of New York by mayor J. Jonah Jameson. While they fought, an accomplice of Fester stole the key. Power Man (an apprentice of Iron Fist and a Hero for Hire) told Spidey that he had been told that there was a bomb in the key and the tip came from Norton G. Fester. (This is why Fester fails as a crook. He signs his real name to things.) The key was needed by Fester to open a secret door under Federal Hall on Wall Street. He had heard a conspiracy theory that many of the Founding Fathers were 33rd degree Freemasons and he wanted the meteorite under Federal Hall that had been a part of the Mason's ceremonies. Once he got to it, it released a space creature that attacked Looter, Spider-Man and Power Man. Power Man impaled the alien with a flag pole and Looter was taken back to prison. The best part?

Fester was at one point hired by Janice Lincoln as she was defending a criminal against Matthew Murdock in court. She knew that she would lose the case against Murdock, so she hired the Looter to attack the courthouse during the trial, to force Murdock to become Daredevil and abandon the trial. Since Murdock was absentee, the judge had to acquit the twice convicted felon that Janice was defending. Looter got his butt kicked by Daredevil. At a later date, Janice became the Beetle and ran into Looter at a party. She tried to talk to him and he blew her off, saying that now that she was a super villain, she was competition. (Superior Foes of Spider-Man #10)

Norton briefly teamed with Basilisk and tried to steal an Ellsworth sonic reducer for Hydra, but they were beaten by Spider-Man. Looter left New York and improved his costume and strength with bionic upgrades. He staged a one man crime wave across the Midwest and killed a St. Louis based superhero called the Plainsman. This helped his confidence greatly and he returned to New York and tried to recruit Will o the Wisp, Freak and Delilah into joining him. He masterminded a diamond district robbery but was stopped and savagely beaten by Spider-Man (Octavius). When Looter tried to shoot him with his dazzle gun, Spider-Man broke his legs and one arm, allowing him one good arm to use to crawl to the police. He left New York and only returned when he attended a Supervillains Anonymous meeting to tell others what Spider-Man was capable of. (The Superior Foes of Spider-Man #11)

After Spider-Island 2 was destroyed by the Green Goblin and his minions, Looter and the remaining Spider-Man troops used the resources left behind to go on a crime spree. They were quickly defeated by Spider-Man, Silk, Spider-Man 2099, Jessica Drew, Anya Sofia Corazon, Spider-UK, Mayday Parker (Spider-Girl), and Spider-Ham. (The Amazing Spider-Man #9 vol 3)

Looter's luck hit a new low after he crossed paths with Venom. Fester had planned on selling toy guns (painted black to look like the real thing) to crooks to use in robberies. Brock didnt take any mercy on the small time crook, sinking his claws into Looter's arms. The symbiote wanted to kill him, but Brock decided that Fester was an idiot, not a real threat. Looter escaped as they argued. He went to a bar to drown his sorrows, complaining to the bartender that he wasnt a pushover. He was approached by Lee Price, the previous host to the Venom symbiote. Price had gained the symbiote of the vigilante called Mania, and called himself "Maniac." He bonded part of his alien to Fester and forced him to join his gang. (Venom Inc Alpha)

Looter and Price's gang soon interrupted a meeting between Black Cat and Hammerhead. They made it clear that they were there to take over Cat's territory. Cat's gang (Hammerhead, Mac Gargan, Killer Shrike and others) was soon all under the control of Maniac. (Amazing Spider-Man #792)