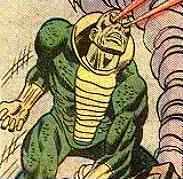 Basil Elks is an inept thief who finds himself in a confrontation with a museum guard after he takes too long in gloating over a big green gem he is in the process of stealing. In the ensuing gunfight, the gem is hit by a bullet and explodes! The jewel is the Alpha-Stone, a Kree object of great power that, along with its companion the Omega-Stone, drifted to Earth from the far reaches of space. The explosion confers the gem's power to Basil Elks, turning him green and giving him big bulging red bug-eyes that can shoot out heat beams, force beams, and transmutation beams. He uses his eye beams to literally freeze the guard, and then change a valuable suit of armor into a dopey-looking costume. Now he is truly the Basilisk.

In his changed form, the Basilisk can sense the power of the Omega-Stone nearby. He goes in search of it but runs afoul of Spider-Man and Captain Marvel I. The Basilisk finds the second gem buried at a construction site but leads Spidey and Mar-Vell right to him. During the battle, Captain Marvel touches the Omega-Stone and his Kree energies cause the gem to grow and swallow him up. The stone disappears in a flash of light taking Mar-Vell with it.

This all leads to Spidey teaming up with Mr. Fantastic to travel to the underground world of Subterrania. It turns out the Mole Man is responsible for the disappearance of the Omega-Stone as he teleported it to his kingdom as an energy source for his Laser Cannon. The Basilisk traces the stone's energies and joins the party. In the melee that follows, Captain Marvel is freed from the stone, the Mole Man is cut off from his servants by a river of lava, and the Basilisk is swallowed up by molten magma just as he is about to grab the now-normal-sized Omega-Stone. The heroes, as you'd expect, all escape.

But the Basilisk is not dead. (Yet.) Before being engulfed by the lava, he comes in contact with the Omega-Stone. It grows in size and traps him within, just as it previously trapped Captain Marvel. When a hard-luck subterranean touches the stone, the Basilisk is freed. He absorbs the power of the second stone within himself and murders the subterranean. With the addition of the Omega-Stone's power, the Basilisk is able to teleport and to create volcanoes. One of his volcanoes sprouts just off Manhattan in the Hudson River. There, Basil battles Spider-Man and the Thing. He is defeated by simultaneous punches by the two heroes, which knock him unconscious just as his eye-beams are reaching full power. With no conscious thought to direct them, the eye-beams implode, wiping out both the volcano and the Basilisk.

But the Basilisk is not dead. (Yet.) Somehow the implosion only trapped him within the earth. Sensing the construction of Four Freedoms Plaza, the new Fantastic Four headquarters, on the grounds of the old Baxter Building, Basil uses his eye-beams to cut through the rock and emerge in the basement of the building. He climbs to an upper story and is shot dead by a construction worker. His body smashes out a window and plunges to the street. But, the Basilisk is not dead. (Oh no, wait. He is dead.) His killer is the Scourge of the Underworld who just happened to be hanging around in a construction worker disguise at the Fantastic Four's headquarters.