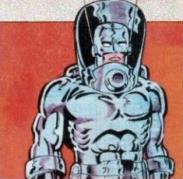 Wilbur Day worked at Kaxton Industries as a scientist. After he became disgruntled with his job, he decided to steal the company's hydraulic ramming device. He used this ramming device to create a suit of armor that allowed him to start a life of crime. The ramming device was attached to stilts, and this let Stiltman propel through walls and stun opponents while staying protected by his armor.

Stilt man's crime career began as revenge against his former employer. In addition to the Stiltman persona, he even tried sueing the company with Matt Murdock as his lawyer. Eventually, it was uncovered that he and the person who robbed his company were the same. After this, Stilt man became a criminal for hire. After early bouts with Daredevil, Captain America and Thor, the Stiltman becomes a bit of a joke of a villain. In recent appearances, he is used mainly for comic relief, since the idea of extending legs is certainly not threatening to anyone.

In the Spider-man/ Daredevil series in 2001, there was a revamp to try and make stilt man a bit darker and more intimidating. However, in his last appearance in a Spidey comic, Spider-man easily takes care of Stiltman on his way to stop a more intimidating team up of Shocker and Hydro Man. As long as someone needs a cheap for hire criminal with little to no fighting skills, there will be room for the stilt man!

Stiltman has since been killed by the Punisher.