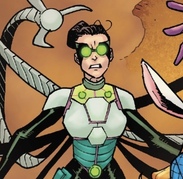 Dr. Octopus II first appeared in the midst of the infamous Clone Saga. Her story cannot be discussed without touching on the (sometimes confusing) plot threads from that period.

Dr. Octopus II is Carolyn Trainer, an adoring student of the original Dr. Octopus and the daughter of spider-clone Ben Reilly's friend, Dr. Seward Trainer. Impressed by and enamored of Otto Octavius even before the accident that turned him into Dr. Octopus, Carolyn was always willing to help her idol. She even went so far as to become a regular visitor of his in prison. She eventually became an expert on experimental virtual reality constructs. When Dr. Octopus concocted a plan to create a VR body for himself to do his fighting for him, he came to Carolyn. Together, they created Stunner and the Master Programmer but Dr. Octopus was killed before the whole experiment could be carried out. Enraged and anguished at the death of her love, Carolyn Trainer took on the guise of Doctor Octopus.

Carolyn first makes her presence known when she kidnaps her father in an attempt to steal all of his scientific data. Seward is rescued by Ben Reilly as the Scarlet Spider. Since she never confronts Ben directly and her voice is masked through her intercom system, her identity, at this time, remains a complete mystery. All we, as readers, see is Dr. Octopus' tentacles.

Eventually, Carolyn manages to steal her father's data on converting "actual living matter into virtual reality itself". (Carolyn herself has created a "virtual reality bomb", a device that, when tested, seems to transport the pedestrians on Fifth Avenue to the Jurassic era.) Unfortunately, she cannot crack Trainer's access codes to get to the data. Returning to Seward's lab to force him to give her this information, Ock II ends up battling the Scarlet Spider, soon to be joined by Spider-Man. The fight ends in a stalemate, but Spidey, nearly dying in the fight and with a pregnant wife at home (also believing, at this point, that he is the clone), thinks long and hard about his future as a super-hero.

In a climax that mimics the Master Planner storyline from ASM #31-33, Mary Jane is hospitalized because of traces of radioactivity in her blood. The antidote is stolen by Carolyn who suggests a swap of the serum in exchange for her father. Seward is taken to Octopus' underwater hideout where he gives the access codes to the computer-being known as the Master Programmer (who turns out to be a digitized version of the mind of the original Dr. Octopus). Meanwhile, Spider-Man and the Scarlet Spider crash the scene. In the ensuing battle, Spidey knocks a hole in a wall that sweeps Carolyn out into the river. Spider-Man stays behind, buried under tons of rubble (a la ASM #33). This time, he is rescued by Ben Reilly and vows to hang up the webs for good.

For the next two months, the four Spider-titles become Scarlet Spider-titles, in preparation for Ben Reilly taking over as Spider-Man. Carolyn has, of course, survived her plunge into the river and is arranging to steal "cyberneural" inductors to continue her virtual reality plans. This time, she has competition from a gang apparently led by Mr. Tso (though Tso turns out to be a front man for Alistaire Smythe), who also wants the components. When Mr. Tso's men invade one of her hideouts, Octopus blows it up, with her own men inside, rather than lose the technology to her enemies. The main piece of equipment she tries to protect, a virtual reality visor, is, in turn, pulled from the rubble by the Scarlet Spider. Ben turns the visor over to Seward who uses it and is attacked in cyberspace by VR-37, one of Dr. Octopus' constructs. As a result of the ensuing battle, Seward becomes a mindless vegetable.

Ben takes Seward to the hospital. He later discovers that Seward's mind is trapped in cyberspace where he can spy on Carolyn and the Master Programmer and report back through any computer screen. Carolyn, meanwhile, has hired the hitman known as the Pro to eliminate Mr. Tso. This is thwarted by Ben, who just happens to work at Mr. Tso's restaurant, Club Noir. As a result of his actions, Ben ends up becoming Tso's bodyguard.

Octopus goes after more components in Mr. Tso's possession. She sends the Looter, Aura, and Override. The trio does quite a job of trashing Club Noir but are stopped by the Scarlet Spider. The follow-up battle takes place at the Central Park Children's Zoo. Ock's trio faces off against the "cyber-slayers", robots created by Alastair Smythe and controlled with VR visors by Smythe and Tso, with Scarlet stuck in the middle. Looter, Aura, and Override are beaten and arrested by the police. Carolyn vows revenge.

Her first step is to conjure up Stunner (the super-strong woman who was the first Doc Ock's lover) in cyberspace. Then, she discovers a spy in her organization in the person of F.B.I. agent Joe Wade. She wires Wade into a massive machine that uses his life force to create a solid VR figure of the Scarlet Spider. (It is this destructive creation that forces Ben Reilly to give up the Scarlet Spider identity.) Wade is placed in a laboratory, where he meets an overweight woman who is wired into a machine as he is. This is Angelina Brancale and she is the real person behind Stunner.

In the climax, Carolyn reveals that her plan for the components is to power her "Virtual Reality Wave Generator" which will merge reality and virtual reality and allow the Master Programmer to survive in the real world. She decides to take on the task of stealing the components herself and defeats Smythe in the process. (As the Pro returns to murder Mr. Tso.) She activates the VR device and has a tender moment with the Master Programmer before the Scarlet Spider ruins her fun. Ock is nearly electrocuted from her device's backlash but still manages to escape.

Some time later, Carolyn makes an attempt to steal her father's body from the hospital but Ben (now operating as Spider-Man) finally defeats her convincingly. Seward's mind is finally rejoined to his body (too bad he's cavalierly killed off not too many months later) and Carolyn is taken off to jail.

She does not appear again until Peter is reinstated as Spider-Man and her return is only in service to the resurrection of the original Doc Ock. Apparently escaping jail at some time, Carolyn learns that Otto Octavius' body has been stolen and undertakes to discover who the grave robbers are. She contacts Angelina Brancale and repowers her into the Stunner persona. (Bet you thought Angelina was still stuck in that VR equipment all this time.) Together they track down the Rose (Jacob Conover), Delilah, and the Hand as they are preparing to try to resurrect Octavius. Spidey joins the party and is captured. A physical essence is needed for the resurrection and Spidey has unknowingly volunteered his own.

The resurrection process reaches a critical step when Spider-Man manages to escape. A physical essence is still needed so Stunner volunteers. However, since Stunner is a VR construct rather than a real physical being, bad things result. Angelina Brancale is thrown into a coma as her Stunner body dissolves. Octavius is resurrected but imperfectly. (He no longer has the memory of Spider-Man's secret identity.) The man who conducted the resurrection, Master Zei, is killed along with his men.

With Octavius alive again, Carolyn injects him with a device that gives him the knowledge of the Master Programmer. She then turns her octopus arms over to her predecessor and joins him as his assistant.

Carolyn stayed out of sight for years, until she appeared as a hired gun for Lucia von Bardas in Latveria. The nation was being invaded by SHIELD and various super vigilantes after it was found that Bardas was selling weapons technology to the Tinkerer. Tinkerer was then selling the weapons to New York's super criminals. She ended up dead in a massive battle involving Hobgoblin V, Scorpion, Shocker. The "invaders" of Latveria during this Secret War were everyone from Captain America to Spider-Man to the Punisher.

Lady Octopus was soon working with the Sinister Syndicate, with Beetle (Janice Lincoln), White Rabbit, Scorpia, and Trapster. Their first act was to break the new Electro (Francine Frye) from police transport. (Amazing Spider-Man (Vol. 5) #25) They rescued Electro to have her join their team but they didn't give a great first impression. Carolyn complained that their kitchen needed better ingredients and the refrigerator was full of dairy. It kept her from her plan for vegan cheeseburger night. White Rabbit resented her dislike of dairy, as she was the owner of the dairy. Electro was about to walk out when Beetle mentioned that they were going to kill Boomerang. They then attacked the F.E.A.S.T. Center and found Boomerang with Peter and Aunt May. (Amazing Spider-Man (Vol. 5) #26)

Boomerang had previously been the leader of the Sinister Six and had double crossed Beetle and the rest of that crew. At another time, he blew up The Bar With No Name while Electro was inside. The rest of the Syndicate hated him because he tried to pick them up at TBWNN. Spider-Man arrived and the banter stopped. The team had been practicing together and fought better together than Spidey and Boomerang. Spider-Man was knocked out by one of his gas boomerangs and Boomerang was taken away. Back at the hideout, Electro expressed gratitude for being accepted into the group, as no one had ever accepted her. The rest of the gang sympathized, and Trainer recalled the time that Alistaire Smythe mansplained The Theory of Inherited Clone Memory to her, when she was the one that wrote it. (Amazing Spider-Man (Vol. 5) #27)

As they discussed what to do with Boomerang, they were interrupted by Mayor Wilson Fisk, his paramilitary troops and Spider-Man. Boomerang was restrained but still able to talk and told them that Beetle set them up. Mayor Fisk wanted to capture Boomerang and Beetle couldn't do it herself so she assembled the team to do it. Now that he was captured she wanted to get the rest of them out of the way to get the reward herself. He knew, because it was the same thing he had done to her and the Sinister Six. She confessed that he was right but her plan had been that Fisk would make them his personal deputies in exchange for immunity. The rest of the Syndicate hated the idea but went along with Beetle's leadership after she told them a secret that Boomerang had told her: They couldn't turn him over to the mayor, for a very good reason, which was unrevealed. They fought to help Spider-Man, who was busy with Fisk's troops. After Spider-Man and Boomerang escaped, the Syndicate was arrested by Fisk's soldiers but were later rescued from their own transport vehicle. (Amazing Spider-Man (Vol. 5) #28)