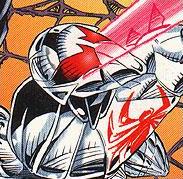 The gang war over experimental VR tech between Carolyn Trainer, aka the New Doctor Octopus, and Jason Tso did not go unnoticed by the federal government. Special Agent Joe Wade of the FBI was sent undercover to infiltrate Ock's operation and find out exactly what she was up to. Unfortunately for him, his cover wasn't as solid as he thought. Lured into a trap by a woman working for Ock, Wade was captured and strapped into an elaborate VR machine; one of the very same it turned out that the real body of the original Doctor Octopus' lover, Stunner, was strapped into.

All the information she and the Master Programmer have about the Scarlet Spider was downloaded into Wade's brain. When the process was completed, Wade's consciousness was used to empower a solid hologram of the Scarlet Spider (much like Stunner's body was revealed to be) and sent out on a rampage to discredit the real one.

The real Scarlet Spider pursued his pixilated doppelganger and engaged him to learn that he could pull weapons out of thin air; more hard digital holograms. The real Scarlet got the upper hand and encased the phony in a web ball, but upon opening it the fake was gone and the damage to Scarlet's already shaky reputation was done. To further bring misery to the life of Ben Reilly, the phony Scarlet Spider had also ransacked the home he shared with the then- comatose Seward Trainer.

Lady Ock and the Master Programmer had soon enacted their plans to merge the real world to the virtual one via a VR bomb. In his final feat as the scarlet wonder, Ben stopped them both and Ock's lair was destroyed as a result; with Stunner and Wade still inside in their respective machines. But, the story doesn't end there. Apparently the resulting destruction infected Wade with the nano-tech machines that composed his holographic self and he became, physically and mentally, the Cyber Scarlet Spider. Scarlet once again remained true to his programming causing random mischief about town until the strain becomes too much for his human half and he reverts back into Wade. Wade manages to rest up and hold on long enough to reveal his situation to his former partner, Special Agent Stephanie Briggs, before becoming Scarlet again and returning to his escapades.

Meanwhile, the New Warriors had begun to scour the city to track down and stop their very former member. Firestar, who shared a special connection with the real Scarlet while he was with them, was the first to find the imposter wrecking a bridge. She confronted him and they engage in a fight, soon learning that the man she fights was not a flesh and blood being, but rather a metal fake. Scarlet easily took her down with an energy blast and moved in for the kill until the rest of the Warriors showed up. They held their own for a bit until Scarlet Hulked out and grew in size and power. Eventually, the Warriors were forced to let him escape as the bridge and the stranded civilians on it needed tending to.

Wade made one final appearance on the doorstep of his ex-partner looking for help before Scarlet recharges sufficiently and went on one last rampage. He broke into a TV studio and holds a talk-show host, her guests and the audience hostage. Coincidentally, one of those hostages happened to be the mother of New Warrior Speedball, which made the fight more personal for the Warriors. Even with the combined powers of the Warriors and Ben Reilly as the new Spider- Man, they could barely take down the bigger and badder Scarlet Spider. In the end, it was a wounded Agent Briggs who got through to the man inside and got him to power down. He was taken into federal custody for medical treatment and research, and that was the last anyone had ever heard from the Cyber Scarlet Spider.