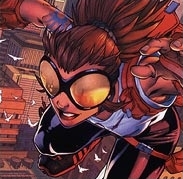 A sassy 15-year-old of Mexican and Puerto Rican descent from Brooklyn, Anya Sofia Corazon was raised by her dad since the death of her mother. Her life was all about friends, gymnastics, field hockey and trying to stay out of the trouble she often invited upon herself by her attitude. Goaded into a late night fight by a school bully, Anya stumbled upon Spider Society mage Miguel battling members of the Sisterhood of the Wasp. Anya jumped in to protect him, receiving a fatal wound in the process. Miguel offers to save her only if she accepts her fated role as the "chosen one", an initiate of the centuries-old Spider Society. She agreed and he used his abilities to activate the hidden talents within her. In return, she became his partner and champion of the Spider Society fronted by WebCorps, an information-trading corporation established by the mysterious spider-powered Ezekiel Sims.

Becoming Arana (Spanish for "spider"), she and Miguel had formed a team with resident hacker Ted Mankowski and aspiring executive Nina Smith in the efforts of the Spider Society to protect the world. She designed her own costume and the bola which she carries into battle on her own, not satisfied with the options WebCorps presented her. To cover for her activities, she had become an intern at WebCorps to help explain why she would be there so often. As if juggling being a super hero and teenager weren't enough, she had to also constantly resist the urges of the brutal spirit of "the Hunter" that threatened to emerge in the midst of combat.

Arana learned that she was not a true hunter as believed by Miguel. It was revealed that no hunter before her ever had a carapace like hers. When Miguel fell in battle with the Sisterhood as they tried to resurrect their own hunter, the spirit of the hunter returned to its rightful place; inside Nina. With Miguel dead and her reasons for being with WebCorps gone, Anya quit and has gone on to fight for the greater good on her own.

With the initiation of the Superhero Registration Act, Arana decided to register to become an official hero after Ms. Marvel and Wonder Man tracked her down. They now teach her in the use of her powers by letting her tag along on missions including the capture of Shroud and Arachne. During a battle with the Doomsday Man, Arana was gravely injured by her carapace being forcibly removed.

Her battle with Hunters continued, as she was kidnapped by Alyosha Kravinoff during the Grim Hunt. The Spyders were being hunted by the Kravinoffs, to be sacrificed and used to resurrect Kraven the Hunter. The spider-clone known as Kaine took the place of the real Spider-Man and was used to bring Kraven back to life. The other spiders, Madame Web and Julia Carpenter (the second Spider-Woman) were also taken prisoner. While the Kravens plans for them were never revealed, Cassandra was killed, as was Mattie Franklin, while Julia gained Madame Web's powers and Arana took over as Spider-Girl.

Arana gained a personal enemy after the Grim Hunt in Ana Kravinoff. Ana was sent by her father to kill Spider-Girl, to goad Spider-Man into killing Kraven. (Spider-Man was permanently linked to Kraven after his suicide and the Hunter could not die unless by Spider-Man's hand.) She noticed that she was being stalked by Ana and waited for her on a roof top. The young Kravinoff had expected to surprise Spider-Girl but had walked into a trap. Anya took out her anger at her father's death on Ana and thought she had beaten her. Instead, Ana had just been testing her strengths and weaknesses. Anya had taken Ana's hunting knife but realized Anya wouldnt use it. This gave the Hunter the upper hand and Anya fled across the city.

Anya soon realized that Ana was more used to the jungle than to New York. Spider-Girl led her to the Baxter Building, the home of the Fantastic Four. The building's defenses recognized Spider-Girl as one of the good guys and saw the Hunter as a potential threat. The robotics chased her off allowing Anya to get the upper hand. She attached a bola to Ana and to the end of a truck, dragging Ana down the highway. She was quickly unconscious and in police custody.

Anya has a history of bad blood with the Goblins of New York crime fame. One of the Green Goblins had a role in her mother's death, so she was more than happy to take on the Hobgoblin (Phil Urich) when he picked a fight with her. Phil wanted to impress Norah Winters and thought that killing Spider-Girl would do that. Anya held her own against him, using gum in her ears to protect her from the Hobgoblin's sonic laugh. Hobby fled when Spider-Man arrived, who scolded Anya for taking the Goblin on alone.

She met the Hobgoblin later, after he saved her from an attack of Wasps. Urich then kidnapped her and took her to the Kingpin, who wanted her to join his organization.