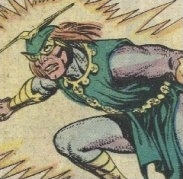 Fabulous secret powers were revealed to "Slapper" Struthers the day he held aloft a magic sword and screamed in agony. Having broken into the British Museum after hours, he stumbled across the Excalibur exhibit, where the famous magical sword lay sheathed in a stone. Drawing it, he learned too late that this was not the original Excalibur, but a cursed replica crafted by Morgan le Fey... a replica which allowed her to ensorcel the wielder, provided that wielder were sufficiently vicious and free of compassion.

From far in the past, Morgan bewitched Struthers, and allowed his body to be possessed by the spirit of a knight loyal to her. That knight, Excaliber, swore his loyalty to Morgan anew, and set out to do her bidding.

That bidding was to find a particular grimoire that Morgan needed for her own dark ends. Excaliber's pursuit of the book led him into conflict with Spider-Woman on two separate occasions. Excaliber's magical powers were more than a match for Spider-Woman's abilities, and each time she engaged him in combat directly he defeated her easily. Fortunately for Spider-Woman, both times they fought Excaliber's attention was divided, or the outcome might have been worse for her. The second battle ended in Excaliber's defeat when Spider-Woman, realizing that Excaliber's sword was the source of his power, knocked it from his hand with a spear. Separated from the blade, Excaliber's spirit fled Struthers' body, and Spider-Woman was able to subdue the burglar easily.

Neither Struthers nor Excaliber has appeared since. Struthers is presumably still incarcerated for his many crimes, and the magical sword returned to the British Museum. If Struthers were to regain the blade, or if it were to be wielded by another person similarly deficient in the virtues, Excaliber might be able to return.