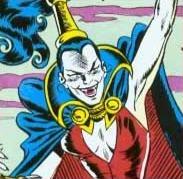 A white scientist and a black cleaning woman were both exposed to massive doses of radiation at an atomic research facility in Los Alamos, New Mexico. One year later, the scientist's wife gave birth to a boy with black skin and hair all over his body. The African-American woman gave birth to a girl with chalk-white skin and vampire-like fangs. As a black white boy and a white black girl, both children were treated with scorn by their peers. The boy continued to mutate until he took on the appearance of a mandrill. Eventually, his overwhelmed parents abandoned him in the desert where he stumbled upon the girl who was running away from home.

They teamed up and traveled the country together for eight years, educating themselves by stealing books and listening outside schoolrooms. One day, they are attacked by an angry mob with pitchforks and guns. Young Nekra is filled with hate by this attack. When a pitchfork stabs her, the tines bend without breaking her skin. She and the Mandrill kill the attacking men, having learned that Nekra gains superhuman strength and invulnerability with the increase of her hate. The Mandrill eventually learns that his mutant abilities include the power to make women his slaves (which is why Nekra trusts him from the very beginning).

He develops a grand scheme to travel to Africa, recruit an army of worshipful women cultists, and carve out his own country by overthrowing three African democracies. Nekra comes along as his High Priestess. Once in Africa, however, the Mandrill comes up against Shanna the She-Devil. Shanna is not affected by the Mandrill's power, for some reason, and she defeats him, turning him over to SHIELD.

Unfortunately, the Mandrill's women abduct Shanna's father. Nekra makes her first appearance as the Priestess of Darkness, in an attempt to free the Mandrill and get revenge on Shanna but the She-Devil defeats her as well. Shanna leaves Nekra tied to a tree and guarded by her companion Patrick McShane, a game warden, while she goes to SHIELD for help. But while Shanna is gone, Nekra breaks free and murders Patrick with her bare hands. Shanna subsequently learns that her father has been found murdered in South Africa.

Nekra returns as an agent of Black Spectre, a terrorist group spreading hate in the United States by engaging in such bizarre activity as attaching a huge swastika on the top of the Washington Monument and carving Adolph Hitler into Mount Rushmore. In New York, Nekra kidnaps the Black Widow. Later, Daredevil, with the help of the Thing, breaks into a suspicious-looking dirigible, which has appeared in the skies over all of Black Spectre's evil pranks. It turns out to be Black Spectre's headquarters.

The two heroes fail to capture Nekra and the masked leader of the group, partially because the Black Widow has joined the enemy and fights against them. Eventually Daredevil learns that the leader of Black Spectre is the Mandrill (who has escaped from SHIELD with the help of the Silver Samurai), that all of the Spectre agents are black women from his African cult and that the Black Widow fights for Spectre because she has fallen until the spell of the Mandrill's mutant power.

Meanwhile Shanna the She-Devil, tracking her father's murderers has arrived in New York. She tells Daredevil that she believes the Mandrill murdered her father and that Black Spectre is financed by her father's stolen fortune. Soon after, Nekra defeats Daredevil while the Samurai kidnaps Shanna. The Mandrill wants to experiment on her brain to see why she can resist his power over women.

All of this leads up to a plan to overthrow the government of the United States, believe it or not. Black Spectre agents set up a huge Mandrill idol on the White House lawn while Mandrill and Nekra move into the Oval Office. Daredevil, now captured and strapped down on a lab table next to Shanna, finally manages to snap the Black Widow out of her spell. Fortunately, the Widow recalls all that she learned while a slave to the Mandrill and the three heroes use that knowledge to break into the Oval Office and fight Black Spectre. The Mandrill appears to fall to his death from the roof of the White House while Nekra is captured and taken away by SHIELD.

Nekra eventually escapes from SHIELD, vowing revenge on the Mandrill for abandoning her. In the sewers of New York, she comes upon a cult of Kali worshippers. She uses her invulnerability powers to convince them that she is Kali incarnate and she takes over the cult. She moves them to Los Angeles, where she murders the reclusive Adrienne Hatros, the head of a clinic on emotional research. Nekra assumes Hatros' identity and takes over the clinic. However, she is not prepared for the appearance of Spider-Woman I who has been working at the clinic in her identity of Jessica Drew and the Shroud who has been tracking the Kali Cultists across the country. Though invulnerable to everything else, Nekra discovers she is susceptible to Spider-Woman's pheromone emissions. She ends up in a coma and re-imprisoned by SHIELD.

Of course, you can't keep a good Hate Priestess down. Nekra recovers, escapes, and becomes the lover of the Grim Reaper. Being the ever-dutiful companion, she adopts the Reaper's enemies as her own and joins him on his bizarre vengeance schemes against Wonder Man and the Vision. When the Grim Reaper gets himself killed by being skewered by a stalagmite, Nekra combines her African potion and Kali knowledge with what she has learned from the zombie-maker known as Black Talon to bring the Grim Reaper back to life in a much more natural form than the usual members of the walking dead. She does not let on to him that he is a zombie. When the Reaper finds out, he feels betrayed and attacks Nekra. Her love for him negates her power of hate. Without that power, the spell does not hold and the Reaper dies again.

On her own once more, Nekra re-assumes her Adrienne Hatros identity and tries to turn the entire town of Shriver Cove, Massachusetts into hypnotized cultists. She also carts the Grim Reaper's dead body around with her, hoping to again bring him back to life. This scheme is thwarted by Spider-Man and Dr. Henry Pym but Nekra escapes.

Nekra shows up next in Winnipeg, unwittingly drawn there (along with the Scorpion, the Asp, and the Owl) by some character called Llan the Sorcerer. She fights Vindicator of Alpha Flight and, well, all the villains get defeated. She is subsequently taken to the Vault for imprisonment.

Somehow she gets away. Having realized how much she loves the Grim Reaper, she creates another ritual that brings him to life. This time, the Reaper must kill a human being and absorb their life essence through his scythe every twenty-four hours in order to stay alive. The first person the Reaper chooses to kill and absorb is... Nekra. Sounds like she should have stuck with the hate.

Not long after (just to bring this full circle), the Mandrill tracks down and attacks the Grim Reaper, seeking revenge for the death of his "sister". But the Reaper simply sucks the life out of the Mandrill as well.

After Martha “Mattie” Franklin’s boyfriend harvested her blood, he sold it to Nekra who used it to make Mutant Growth Hormone. MGH could be used to give the user temporary super power. (The Loners #1)