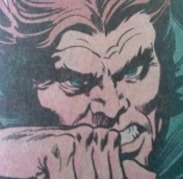 ”A Fluttering of Wings Most Foul!”

Once a well known financial investor and corporate executive, Leland Owlsley was dubbed "The Owl" by those who knew of his ruthless and illegal financial tactics. Eventually Owlsley made the transition from fraud to true villainy when he attempted to take control of the criminal underworld in New York. While his plan to kill Daredevil in front of a gathering of crime bosses was foiled, the attempt set in motion a life of murderous organized crime for the Owl.

The first run-in the Owl had with Spider-Man was when the web head had teamed up with Daredevil to stop a jewelry store heist. Spidey and DD followed the Owl back to his hideout where Owlsley had a number of traps set up for the invading heroes. Once Spider-Man and Daredevil traversed the traps and fought off the Owl's men, Owlsley was undone by his own faulty pacemaker which sent him into a coma. (Marvel Team Up #73)

”The Fatal Attraction of the Black Widow”

Once the Owl awoke from his coma he discovered that his recent ordeal had caused him severe nerve damage. He could no longer fly or even walk. In response, he devised (with the help of the Maggia) the construction of a mobile hover craft to act as a wheel chair. Wishing to repay his debt to the Maggia, Owlsley set up a shipment of contraband weapons. Unfortunately for Owlsley, the Black Widow and Spider-Man came across the warehouse where the illegal arms were being dropped and quickly set out to find who was responsible. Their search eventually lead them to a mansion on Long Island where they came face to face with the Owl. The laser equipped hover board certainly made Owlsley a more formidable foe, but after a lengthy game of cat and mouse, Spider-Man eventually got the better of his opponent. (Marvel Team Up #98)

The Owl's next scheme would end up pitting him against Otto Octavius in a memorable gang war. The Owl planned to steal a nuclear detonator from the Kingpin so that he could hold the city ransom. While the plan itself seemed fool proof, Owlsley's first mistake was to recruit the maniacal Doctor Octopus to help him achieve his goal. Ock betrayed the Owl at the first given chance. (Spectacular Spider-Man (vol. 1) #73)

The two gangs raced to acquire the nuclear detonator first. The Owl and his gang were the first to act, stealing a nuclear bomb from an atomic research facility. Spider-Man, who caught wind of the gang war during Ock's initial betrayal, attempted to stop Owlsley but failed. Meanwhile, Octavius supposedly acquired the detonator by simply walking into the Kingpin's office, but it turned out to be a dummy device. The real detonator was pilfered by a newly resurfaced Black Cat. (Spectacular Spider-Man (vol. 1) #74)

It didn't take long for Octavius to realize he had been duped. While Spidey and the Black Cat were catching up at a hotel room, Doc attacked the two heroes with a lethal fervor. After an intense battle, Ock captured both the Black Cat and the detonator. This set into motion an epic battle at the Owl's incredibly tall Aerie off the coast of the Hudson River. Octavius and his army of minions stormed the Aerie in an effort to take control of the bombs. The Owl's army attempted to fight off Octopus and his gang, with Black Cat and Spider-Man caught in the middle. The epic battle eventually ended for the Owl when Octavius ripped off Owlsley's talons, cloak and leg braces and let him fall to the bottom of the Aerie. (Spectacular Spider-Man (vol. 1) #75)

Spider-Man and Black Cat eventually foiled Doc Ock's mad plot to destroy all of New York with the nuclear bomb, but Owlsley was not seen again for some time, presumably to heal from his beating. (Spectacular Spider-Man (vol. 1) #76)

When the Owl finally reappeared he was shown as a cripple, again unable to even walk. In an attempt to cure himself he captured Doctor Curt Connors' family so that he could lure the Lizard to his penthouse apartment. Owlsley knew of Connors' dual personality and felt as if Connors' formula could possibly regenerate his hollow and broken bones. The Lizard, with the help of Spider-Man, took out the Owl and (after turning back into Connors) was able to rejoin his family. (Spectacular Spider-Man (vol. 1) #127)

After the ancient being called Llan the Sorcerer appeared after ten thousand years, he called the Owl, Asp, Scorpion and Nekra to him. Llan’s goal was to help humanity destroy itself. They were defeated by Witchfire, whose magic ended Llan’s control over them and knocked them out. (Alpha Flight (vol. 1) #80)

”Back From the Edge”

After a number of run-ins with Daredevil, Owlsley eventually left New York for a period of time until returning to seek out Adrian Toomes, the Vulture. The Vulture had recently found a way to make himself youthful again and Owlsley (who was going through a bit of an identity crisis at the time) wished to replicate the process. The Vulture had other ideas though and asked the Owl to help him carry out a plot to poison the population of New York by using trained birds. Owlsley was unsure about partaking in such an insane plan but was soon confronted by Spider-Man and Daredevil. During their battle, Spidey was infected by a poison carrying bird and, aided by the distraction, the Owl flew off. In another confrontation between DD, Spider-Man, the Vulture and the Owl, Owlsley opted not to fight his former adversaries and instead tossed Spidey the antidote before fleeing the battle. (Spectacular Spider-Man (vol. 1) #219)

The Owl eventually returned to the world of organized crime and put together a group of villains known as the Gang of Four. Teaming up with Stilt-Man, Gladiator II and Copperhead, the four mobsters tried to make a play on the Kingpin's territory. Spider-Man and Daredevil again teamed up to take down the Owl and his new friends. In doing so, the heroes discovered that the Owl was not actually the man behind the Gang of Four's violent gang operations but instead Copperhead was the driving force. It also turned out that Copperhead truly did die after a previous battle with Daredevil and the man in front of them was actually an undead demon. As Copperhead unleashed an army of zombies on New York that overwhelmed both DD and Spidey, Owlsley mustered up every bit of heroic courage within him to knock Copperhead through a portal to hell, in the process falling through the portal himself. The Owl's unexpected act of selfless heroism not only saved New York but possibly all of mankind. (Spider-Man/Daredevil Unusual Suspects #1-#4)

”Down Among the Dead Men”

Once Owlsley returned to Earth (with no explanation given as to how), he found himself in a position he had coveted for years. With the help of Norman Osborn, the Owl was now the king of the criminal underworld. Sometime after achieving this lofty goal, Owlsley employed the help of the Vulture (with whom he has had a contemptuous relationship with) and Electro to retrieve a large sum of money in Florida. The two super-powered thugs quickly betrayed the Owl though and decided to keep the money for themselves. The Owl soon found a way to retrieve both his money and his deceitful partners when a distraught Spider-Man came to him asking for help. May Parker had recently been kidnapped and the Owl sent Spidey after the Vulture and Electro claiming that they were the masterminds behind the plot. After a series of battles, Spider-Man defeated both villains only to find out that he had been led on a wild goose chase. All worked out well for Owlsley though, while his money was lost during the fray, he was still able to extract revenge on his former employees. (Marvel Knights: Spider-Man (vol. 1) #3-#4)

The Owl's next move as king of the underworld was to employ the help of a drug addicted Carl Creel, aka the Absorbing Man. Owlsley promised Creel all the drugs he wanted if he would kill a number of the Owl's enemies in a 72 hour period. After Creel failed to carry out his mission, the Owl tricked the Absorbing Man into using his absorbing powers to transform into cocaine. The Owl's men then bagged up the cocaine and sold the drug on the streets as "Creel cocaine." Eventually, after passing through the system of a number of New York drug users, Creel reassembled himself and went after Owlsley. Meanwhile, Spider-Man confronted the Owl at his penthouse, angered by what he had done to Creel. As the Owl and a female assassin began to skirmish with Spidey, the newly restored Absorbing Man broke into the penthouse seeking revenge on Owlsley. After realizing that no one in the criminal underworld would be willing to shelter the Owl from the Absorbing Man, he eventually turned himself in to S.H.I.E.L.D. agents. (Marvel Knights (vol. 1)

Owl is currently believed to be in prison after taking a brutal beating at the hands of the Superior Spider-Man. Octavius defeated both the White Dragon and Owlsley by crushing Dragon’s trachea and was equally harsh with Owl. He hadn’t forgotten their past rivalry. (Superior Spider-Man (vol. 1) #10)

After Otto Octavius became the Superior Spider-Man, Boomerang created his own Sinister Six. The group was made up of himself, Shocker, Beetle (Janice Lincoln), Speed Demon, Override, and briefly, the Living Brain.

After Kraven the Hunter was resurrected against his plan, he taunted Spider-Man into killing him again. He and Arcade captured as many animal themed criminals as possible and held them captive in Central Park. They were kept there by a force field designed by Arcade. Kraven also invited wealthy big game hunters to hunt the captives, using robotic avatars. Spider-Man was one of the captives, along with