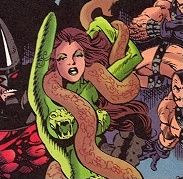 Zelda DeBois was born in France and developed an act using a twenty-five foot python. Presumably, she joined the Circus of Crime in its early days but isn't actually seen in a criminal capacity until the formation of the Masters of Menace. It is, in fact, the Princess who convinces the others to get rid of the Ringmaster, appoint the Clown as the leader, rename the group (she comes up with the name), and go out on a crime spree of their own. The Masters of Menace steal paintings from a Madison Avenue Art Gallery where they run afoul of Spider-Man. However, the web-slinger is unwilling to hit a woman and turns out to be putty in Zelda's hands. She maneuvers the wall-crawler into a fight with her pet but is defeated when Spidey maneuvers her into the arms of the law.

When they get out of prison, the Masters of Menace agree to rejoin the Ringmaster and his Circus of Crime. They try to hypnotize Avengers' members Hawkeye, Quicksilver, and the Scarlet Witch into joining them but fail. Princess Python fights hand-to-hand with the Scarlet Witch but loses when the Witch uses her hex power to soak her down with water. The Circus of Crime does escape capture, however.

The Circus next schemes to steal a huge golden bull but they need a new strong man to replace theirs since "he strained himself trying to lift the elephant". They find the Mighty Thor who has been stripped of his Godly power but is still plenty tough. Thor is hypnotized into stealing the massive golden bull but Princess Python is trapped under the idol in the melee that follows. Thor rescues her. The grateful and somewhat smitten Princess tells the police that Thor was duped into helping them before she uses her snake to escape and rejoin the Circus.

In their next caper, the Circus disguises themselves as caterers in order to sneak into Avengers Mansion so they can disrupt the wedding of Yellowjacket and the Wasp. Zelda's giant python jumps out of the wedding cake and puts the squeeze on the Wasp. But Yellowjacket turns out to be Hank Pym (which no one knew at the time) and he disrupts the plan by turning into Giant-Man, yanking the python off of the Wasp and tying it around the Ringmaster instead. Princess Python tries to sneak away, only to be decked by a punch from the Wasp.

The Circus then sets up a scheme that involves Ulik the Troll. Thor thwarts it and ties Zelda up with her own python in the process.

Now, the Princess strikes out on her own. She goes out to Stark Industries and manages to get an opportunity to get her python around Tony Stark. She tells the world that she wants "one million dollars and a jet plane to South America" or Stark dies. Stark, secretly Iron Man, frees himself by using his chestplate to shock the snake. This isn't good enough. According to Zelda, her "precious" has been specially bred to be able to crush Iron Man's armor (which is the first we've heard of it). The python nearly does so until Iron Man kills it by tossing it in a vat of acid. Zelda is so distraught over the death of her pet that she jumps in after it; only to be saved by Iron Man before she hits the acid. Iron Man, clearly not a pet lover, suggests the Princess be "taken care of by good doctors" because of her excessive hatred of him over the death of her snake.

Apparently, the Princess gets away from those doctors to whom Iron Man consigned her because she is back with the Circus of Crime soon after. Her python has been resurrected as well. It doesn't help her. She and the Circus get defeated by Daredevil.

But the Circus never makes it to jail. They are freed from a prison wagon on its way to the penitentiary by Live Wire who then joins the group. The Princess gets recruited by Viper to start a new Serpent Squad. Zelda breaks the Cobra and the Eel out of jail and they all battle Captain America in his Nomad identity. Eventually they are joined by Warlord Krang who is in possession of the Serpent Crown and the whole thing ends up involving the Sub-Mariner and Roxxon Oil. No matter. The Princess is defeated and led off to jail.

But she ends up back with the Circus when the group captures Luke Cage. Zelda finds herself attracted to Luke which doesn't please Luke's girlfriend Claire Temple. With the help of Black Goliath, Luke Cage defeats the Circus. Zelda is stopped when Luke's pal D.W. Griffith hynotizes her with the Ringmaster's hat.

The Circus reaches its lowest point when Howard the Duck defeats them. Zelda gets bitten on the nose by Howard (And unlike our ducks, the fellows from Duckworld have teeth!) and runs away sobbing.

There's an adventure involving the Incredible Hulk and a mermaid, another with the Thing, Iceman, and the former Black Goliath now calling himself Giant-Man, and another involving the Hulk and Dragon Man. Then Death Adder recruits Zelda to join the Serpent Society. The Society is led by Sidewinder and its other members are Constrictor, Black Mamba, Cottonmouth, Diamondback, Bushmaster, the Cobra, the Asp, the Rattler, and Anaconda. The Society is a longtime thorn in Captain America's side but the Princess decides to break away from the group and runs out. She is captured and brought back only to be ransomed back to the Circus of Crime. But Death Adder, who is delivering her, is killed by the Scourge of the Underworld before the transaction is complete.

Somehow, she finds her way back to the Circus where she is defeated by the She- Hulk and then turns up as MC of Superia's Femizons, introducing all the members of the group to each other. Later, she gets refused admittance to the Bar with No Name by the bouncer (Angar the Screamer) because she won't check her python at the door.

Again with the Circus, she is thwarted by the Ben Reilly Spider-Man, Howard the Duck, Generation X, the Peter Parker Spider-Man, Devil Dinosaur and Moonboy.

Most recently, Zelda and the other Masters of Menace (Clown, Cannonball and the Great Gambonnos) resorted to armed robbery in between their stints of running the Circus (without the Ringmaster who has gone straight). The Hulk busted up these plans but the Princess was not captured in the process. She remains free and at-large.

Zelda was captured by Taskmaster and Black Ant and taken to Central Park. She was held captive with many other animal themed criminals as part of a game created by Arcade and Kraven the Hunter. The captives were being hunted by robots remoted controlled by wealthy donors, for the thrill of killing dangerous prey. The park was encircled by a force field, keeping them from escaping. (Amazing Spider-Man (vol. 5) #18.HU) She likely survived until the force field went down and the surviving criminals were captured by the Fantastic Four, Doctor Strange and the Avengers. (Amazing Spider-Man (vol. 5) #23)