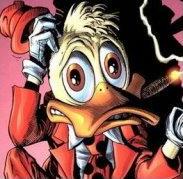 Howard the Duck was born on an unknown planet in an unknown universe, and lived a fairly average life until a disturbance in the Nexus of Realities caused Howard to be torn from his home and deposited into the swamp of the Man-Thing, along with a warrior named Korrek. Howard, Korrek, and Man-Thing fought valiantly against a large number of demons before being teleported away by a sorcerer named Dakihm. Dakihm enlisted the trio in stopping a demon named Thog. However, Howard seemingly met his doom before they even confronted the demon.

Howard, for some unknown reason, did not actually die, and fell into the city of Cleveland at some point later. He decided to make the best of it, and after two false starts (disrupted by the Man-Frog and the Hellcow), the fowl decided to kill himself. To this end, he found a tower made of credit cards and made an attempt to throw himself off of it. He was unsuccessful, and instead met Beverly Switzler. The pair were sent on a mission to retrieve the Key of the Cosmic Calculator by a wizard named Pro-Rata, and were successful in their quest. Howard did not want to give the key to the obviously unbalanced Pro-Rata, and was more than willing to give his life to keep it from him. It was only thanks to the timely intervention of Spider-Man that Howard did not die. After the battle with Pro-Rata, Howard went with Beverly in an attempt to find a place in this world he never made.

At one point, Howard was pegged as the presidential candidate for the All-Night Party. Thanks to a Canadian superpatriot named Le Beaver and a bellboy, he lost the election (possibly the 1976 election). Howard engaged in many adventures and made many new friends and enemies over the months, and gradually lost his sanity, culminating in a mental breakdown in Canada. While he was breaking down, Howard met his friends and foes once more, including Spider-Man. For some reason, Howard's mind had Spider-Man call himself the Spider-Piano. After the breakdown, Howard was taken to an asylum.

After a recovery period which involved Howard being taken over by the Son of Satan and meeting psychic representations of the rock group KISS, Howard went back to Ohio with his friends Beverly Switzler, Winda Wester, and Paul Same. There was not much time to rest, as Howard and his friends soon found themselves in the nation of Bagmom. They managed to avert a hostile takeover of the country for its oil, and the grateful leader of Bagmom sent them back to the United States aboard a cruise ship. This led to conflicts with the villainous Doctor Bong and the Circus of Crime, as well as many more misadventures for the waterfowl.

Howard's life was confusing for a bit after that point, including a period including adventues which may not have happened. At one point, he may have met Spider-Man once again and helped the web-slinger defeat a crackpot named Status Quo. After this, Howard found himself in San Francisco, and after spending a year there, the fowl felt so foul that he needed to leave the city, and eventually found his way back to Cleveland and Beverly Switzler.

In Cleveland, Howard lived peacefully for some time, at one point helping She-Hulk save the Universe. He was somewhat tossed back into the fray when the Circus of Crime came back to town, with Peter Parker and Ben Reilly hot on their tails. Howard helped Peter and Ben defeat the crooked carnies. Afterwards, Howard took a job as a department store Santa, met Generation X, went on an inter-dimensional adventure with Man-Thing, Franklin Richards, and several other youths, and nearly died when a fragment of the Nexus of Realities lodged itself within him. Obviously, he got better.

Recently, Howard suffered through a time when he was randomly transforming (predominately into a humanoid mouse). Most recently, Howard quit smoking at the behest of She-Hulk, attempted to sue George Lucas, and was present at the trial of She-Hulk. Time only knows what Howard will be caught up in next.