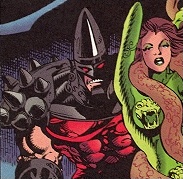 Jack Pulver was an acrobat who developed an act whereby he was shot out of a cannon. He joins the Ringmaster and his Circus of Crime from the very beginning and calls himself the Human Cannonball. He initially wears a red crash helmet and purple jumpsuit. In a battle with the Hulk, he has himself shot out of his cannon at the green goliath with no other weapon but a replica of Thor's hammer. The Hulk punches him right up through the top of the circus tent. This stunt, and subsequent dialogue, makes it pretty clear that Jack is not all that smart.

When the Circus of Crime next appears, Jack has changed his outfit. His costume is now orange and he has replaced the crash helmet with a metal bullet- shaped hat so he can use his head as a battering ram. It doesn't help him. Spider-Man rides him through the air like a bucking bronco and steers him into a crash with a whole group of circus rubes.

Now simply calling himself "Cannonball", Jack joins with the Clown, Princess Python and the Great Gambonnos in ousting the Ringmaster and starting up the Masters of Menace. Since he can't tote his cannon around wherever he goes, Jack is reduced to using his bullet hat as a weapon. He head- butts the Ringmaster in the stomach and head-butts J. Jonah Jameson in the forehead. This latter attack puts JJJ in the hospital with a severe concussion. Spider-Man, in his battle with the Masters, saves Cannonball for last because of this cowardly attack on Jameson. The web-slinger "wonks" Cannonball on the top of his bullet hat, crumpling it and knocking it down over his eyes.

Reuniting with the Ringmaster, Cannonball and the other Masters invite Hawkeye, Quicksilver, and the Scarlet Witch to join them but a fight breaks out instead. Cannonball tries to charge, head down like a bull, at Quicksilver but the super-fast mutant has no trouble disposing of him.

When the Circus of Crime try to use Thor to steal a huge bull made of gold, Cannonball's job is to be catapulted through an upstairs museum window and use a flame thrower strapped to his back to open a section of wall. When the plan goes wrong, he manages to escape with the others.

Next stop: crashing the wedding of Yellowjacket and the Wasp. During the ensuing fight, Jack tries to head-butt the Vision, only to knock himself out on the android's diamond hard body. Cannonball gets carted off to prison with the rest of his teammates.

Jack is merely a bystander in the affair involving Thor and Ulik. When the Circus fights Daredevil, Cannonball's only contribution is to rush at the Man Without Fear, miss, and clobber Princess Python's snake instead. But when Howard the Duck is kidnapped by the Ringmaster and forced to join the Circus, Cannonball is the only one who befriends him. He tells Howard that everyone in the Circus originally tried to play it straight but times were too hard for a small circus to survive. He asks Howard not to judge them too harshly because "We seen hard times, too". In the end, though, Cannonball fires himself at the duck. Howard jumps on Jack's back, covers his eyes, and causes Cannonball to plow into a tent pole.

Cannonball travels to Latveria with the rest of the Circus, gets sat on by Blossom the Fat Lady in a battle with the Hulk, gets his bullet hat caved in when he gets fired at the Thing, and flies out of the tent altogether when he's fired at and misses Giant-Man.

When the Clown leaves the group to rejoin his father with the Quentin Carnival, Cannonball is in the vanguard of the group trying to coerce him back. When the gang attacks the carnival, reporter Cynthia Randolph redirects Jack's cannon before it goes off which causes him to be fired right into the Ferris Wheel.

From there, it's just more of the same versus the Hulk, Power Pack, the Ben Reilly Spider-Man, Howard the Duck (Jack gets a nifty new outfit with a bigger bullet hat and spikes on his shoulders but it doesn't do him any good), Generation X, Devil Dinosaur, and Moonboy (he gets to head-butt Moonboy in the stomach, which I know we'd all like to do, but still loses in the end).

Finally, he joins the Clown, Princess Python and the Gambonnos in Hollywood to commit armed robberies. He ends up in the same place he started; having himself fired at the Hulk and knocked through the top of a circus tent whereupon he must have been captured since he was last seen having a conversation with Abner Jenkins in the cafeteria of Seagate Prison.